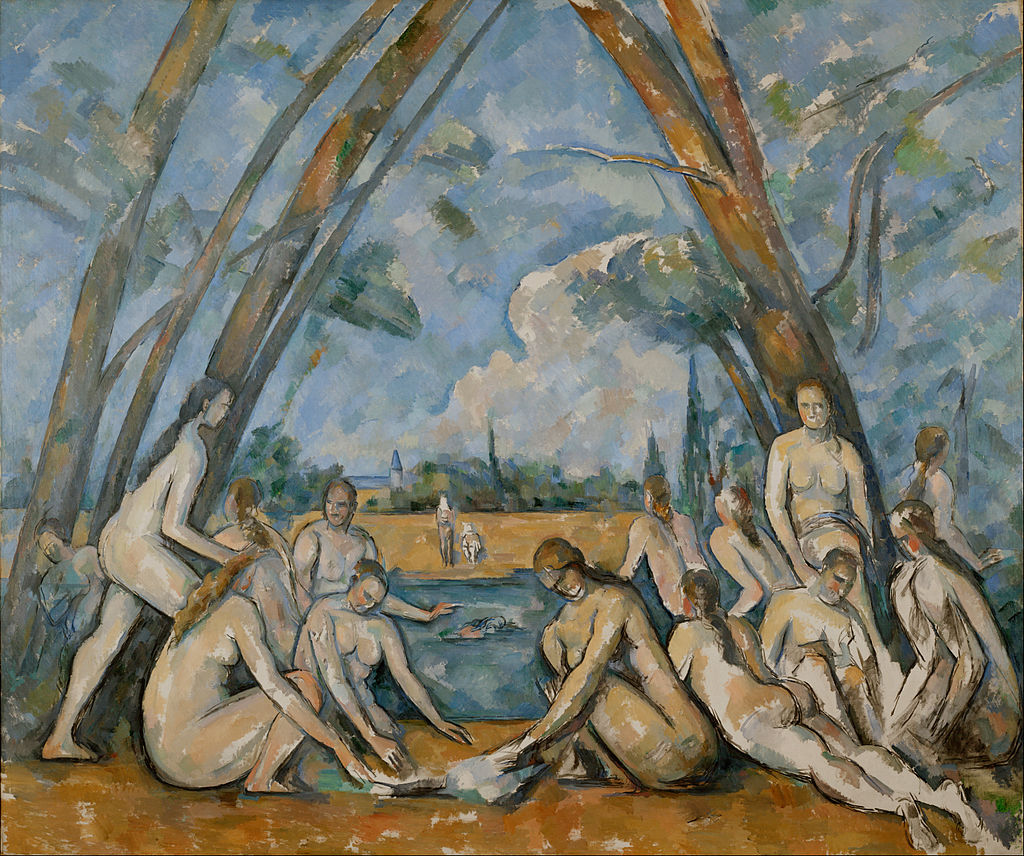 “The Large Bathers” by Paul Cezanne

“The Large Bathers” by Paul Cézanne is a reinterpreting of a historical tradition of painting nude figures in the landscape by famous artists such as Titian and Poussin. Historically artists took inspiration from classical myths. Cézanne, however, was not depicting a mythological story. He was more concerned with the harmony of the figures to the landscape. The Bathers series of paintings inspired  Picasso, Matisse, and other artists in the early 1900s who were exploring and developing new art movements. ‘Bathers’ is reminiscent of earlier artists’ works and forms a basis for comparisons with more modern works such as Picasso’s Les Demoiselles d’Avignon.

This painting is the largest of a series of Bather paintings created by Cézanne towards the end of his life. With each successive version of the Bathers, Cézanne moved further away from the traditional paintings, intentionally creating artworks for an audience more interested in new forms of art. Cézanne wanted to pave the way for future artists to disregard current trends, and he focused on painting pieces that imbued a timeless quality to his work. The abstract nude forms are in symmetry to the triangular and rounded patterns of the trees reminiscent of landscapes and still-life paintings. Cézanne worked on this painting for seven years, and it remained unfinished, he claimed,

“I want to make of Impressionism an art as solid as that of the museums.”

Paul Cézanne was a Post-Impressionist painter who laid the foundations in the transition from the 19th-century Impressionism to the 20th century’s Cubism. Both Matisse and Picasso have remarked that Cézanne “is the father of us all.” Cézanne’s art is characterized by repetitive, exploratory small brushstrokes that build up to form complex color fields, demonstrating his intense study of his subjects.

“A work of art which did not begin in emotion is not art.”

“Shadow is a color as light is, but less brilliant; light and shadow are only the relations of two tones.”

“Painting from nature is not copying the object; it realizes one’s sensations.”

“For an Impressionist to paint from nature is not to paint the subject, but to realize sensations.”

“For an Impressionist to paint from nature is not to paint the subject, but to realize sensations.”
– Paul Cézanne