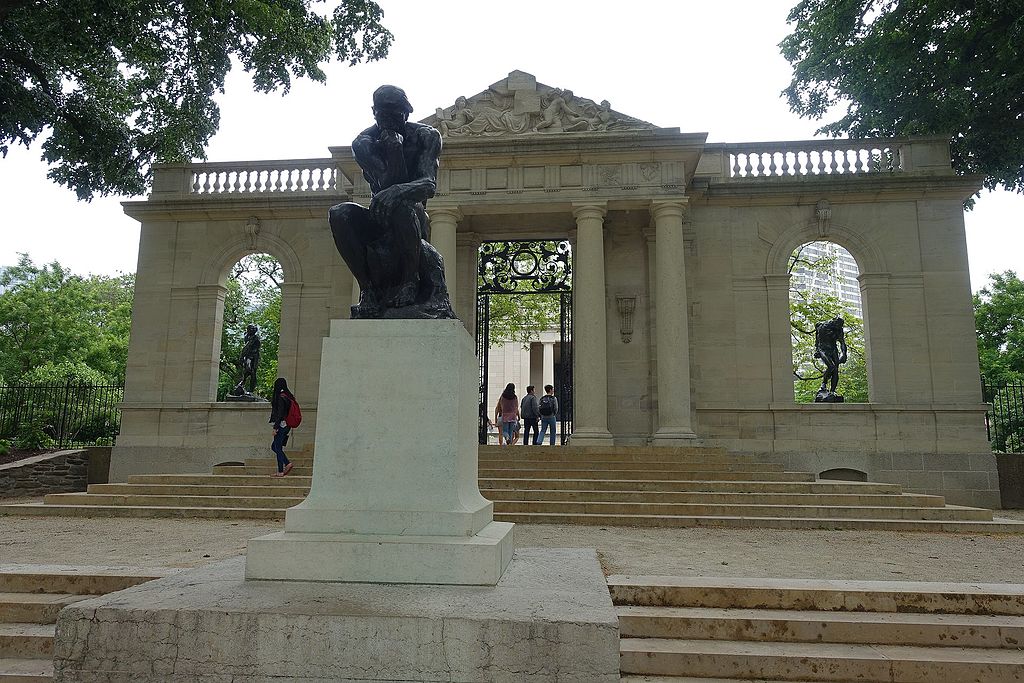 The Rodin Museum in Philadelphia has the most extensive collection of sculptor Auguste Rodin’s works outside Paris.

It first opened in 1929 and recently underwent a three-year renovation that brought the museum back to its original vision of displaying Rodin’s works.

The best-known of Rodin’s works, The Thinker greets visitors outside the museum in the entry courtyard.

Rodin possessed a unique ability to model complex compositions in clay and then to recreate his clay models into a marble or bronze sculptures.

Many of his sculptures were criticized during his lifetime. By 1900, he was a world-renowned artist, and today Rodin remains one of the few sculptors widely known outside the visual arts community.

“Eternal Springtime” by Auguste Rodin was modeled in clay during the same period as “The Kiss” in 1884. This sculpture depicts a pair of lovers caught in a floating embrace.

Their outstretched and graceful limbs are in sharp contrast to the compact, inward-focused sculpture of “The Kiss.”

This sculpture has an air of weightless and floating quality, which makes it a perfect ode to springtime love. Rodin created Eternal Springtime at a time when he was in a romantic relationship with Camille Claudel.

It is claimed that traces of Camille can be discerned in the women of this masterpiece and other female figures prominent in the works Rodin created in the mid-1880s. This work was reproduced several times in bronze and marble.

“Two Hands” was modeled by Auguste Rodin. A plaster version of this sculpture is inscribed “Hands of Rodin and Rose Beuret,” which suggests that these clasped hands are the hands of Rodin, the sculptor, and his lover.

Rodin stated that he felt an: “intense passion for the expression of the human hands.”

During his career, he modeled thousands of hands as small clay studies. For Rodin, the hand and the interplay of hands within groups of figures were expressive components of his sculptures.

Rodin imbued hands with a range of emotions, from anger and despair to compassion and kindness. He kept many hand clay studies in his studio, where he would contemplate them as sculptural forms in space.

“The Cathedral” was modeled by Auguste Rodin and depicts two right hands whose fingers are about to touch. The sculpture creates an intimate space between the hands.

The “Cathedral” was produced many times by Rodin, in stone and bronze. In every version, one element stayed the same. The sculpture is made up of two right hands, each belonging to two different individuals.

This masterpiece was entitled “The Ark of the Covenant” before being named “The Cathedral.” In the “Two Hands” plaster version, there is an inscribed “Hands of Rodin and Rose Beuret,” which suggests that these hands are the hands of Rodin, the sculptor, and his lover.

Parallels have been made between the inner space that emanates from this sculpture and Gothic architecture. The emptiness was an essential element of Rodin’s composition.

Rainer Maria Rilke pointed out that: “the role of air had always been extremely important.”

The Hand of God

“The Hand of God” was modeled by Auguste Rodin, and it attempts to compare the art of sculpture to the divine process of creation.

The statue depicts a right hand, emerging from the earth, holding a lump of clay from which two struggling emergent figures are being modeled.

In this sculpture, Rodin depicts the metaphor of God’s hand, cradling the material from which males and females emerge.

The work presents Adam and Eve entwined in fetal positions and emerging from a lump of earth cradled in God’s hand. Rodin said, “When God created the world, it is modeling; he must have thought …”.

There are also marble versions of “The Hand of God” by Rodin, which makes use of both the technical and symbolic aspects of marble.

The material plays a vital role in the sculpture, especially the under-worked and roughly chiseled portions.

During a trip to Italy in 1876, Rodin had explored the works by Michelangelo in which the figures similarly materialize out of rough stone, symbolizing the process of artistic creation.

In 1889, Rodin exhibited the sculpture independently of The Gates, giving it the title “The Thinker,” and in 1902, he embarked on this larger versions.

It has since become one of his most recognized masterpieces. It has been cast in bronze in three different sizes, including this one of the original medium-sized sculpture of “The Thinker.”

The Gates of Hell is a sculptural group created by Auguste Rodin that depicts a scene from “The Inferno” from Dante Alighieri’s book the Divine Comedy.

The sculpture was commissioned in 1880; it became Rodin’s life work as he continued to work on and off on this project for 37 years, until his death in 1917.

Many of the characters were modeled and cast separately as stand-alone art sculptures. This is one of the reasons Rodin took so long with this masterpiece.

Many of the original small-scale sculptures used on the Gate were enlarged and reworked and became stand-alone works of art of their own.

The Hand from the Tomb

“The Hand from the Tomb” was modeled by Auguste Rodin, who shaped thousands of hands as small clay studies.

Rodin experimented with different approaches to imbue the hands he sculptured with emotions ranging from anger and despair to compassion and kindness.

He kept many hand clay studies in his studio, where he would contemplate them as sculptural forms. For Rodin, the hand and the interplay of hands within groups of figures were significant components of his sculptures.

Rodin felt an: “intense passion for the expression of the human hands.”

This approach reinforced Rodin’s interest in the partial figure. He felt that representations of parts of the body, such as the hand, are not necessarily dependent upon a complete figure to convey meaning.

“The Sirens,” modeled by Auguste Rodin, depicts sea nymphs from Greek mythology who lured sailors to their destruction through their enchanting song.

In Greek mythology, the Sirens were dangerous creatures, who, with their enchanting music and voices, caused shipwrecks on the rocky coast of their island.

The Sirens were the companions of young Persephone, and they were given wings by Demeter to search for Persephone when she was abducted. After failing to find Persephone, Demeter cursed the Sirens for failing to intervene in the abduction of Persephone.

The most famous Sirens’ literary reference is in Homer’s Odyssey. Odysseus was curious to hear the Sirens sing, and on the advice of Circe, he had all of his sailors plug their ears with beeswax.

He ordered his men to tie him to the mast without the earplugs and to leave him tied tightly to the mast, no matter how much he would beg.

When Odysseus heard their beautiful song, he ordered the sailors to untie him, but they bound him tighter.

When they had passed out of earshot, Odysseus was released. Post-Homeric authors state that the Sirens were fated to die if someone heard their singing and escaped them.

Thus after Odysseus passed by, they flung themselves into the water and perished.

Young Mother in the Grotto

Auguste Rodin modeled young “Mother in the Grotto” in 1885, and the plaster sculpture was exhibited under the title “Woman and Love.”

Several versions in bronze and marble were made during Rodin’s lifetime. The woman and child theme was evident in Rodin’s early body of work during the mid-1880s.

This sculpture represents maternal love in a mythological theme; the baby and the young woman were both sentimental and spiritual.

In the later periods of his career, the subject of maternal love is much less prevalent in Rodin’s work as compared to the theme of love between man and woman.

Rodin described how the idea of Saint John the Baptist was inspired by an Italian peasant who offered him his services as a model.

Rodin stated: “As soon as I saw him, I was filled with admiration; this rough, hairy man expressed violence in his bearing… yet also the mystical character of his race.

I immediately thought of a Saint John the Baptist, in other words, a man of nature, a visionary, a believer, a precursor who came to announce one greater than himself. …. I immediately resolved to model what I had seen.”

“The Secret” was modeled by Auguste Rodin and depicts an unknown object hidden by two palms. The secret is keeping the palms forever apart but close enough for the fingers to touch.

The two hands are the right hands of two separate people. The sculpture creates an intimate space between the hands and is considered a companion piece to statue “The Cathedral.”

In another sculpture of “Two Hands,“ there is an inscription in the plaster version: “Hands of Rodin and Rose Beuret,” which suggests that these hands are the hands of Rodin, the sculptor, and his lover.

Was this also the case for this sculpture about a secret?

“The Thinker” at the Rodin Museum, Philadelphia (Full Size)

There are various sculptures of “The Thinker” around the world. They are all usually placed on a stone pedestal.

The nude male figure sitting on a rock with his chin resting on one hand, deep in thought, is often used as an image to represent philosophy.

There are about 28 of the large or full-size castings, in which the figure is about 186 centimeters (73 in) high, though not all were made during Rodin’s lifetime and under his supervision.

There are also various other versions, several in plaster, studies, and posthumous castings, in a range of sizes. The Rodin Museum in Philadelphia, USA, has a medium-sized version and a full-size version.

The Burghers of Calais

Calais overlooks the Strait of Dover, the narrowest point in the English Channel, and during this prolonged conflict, England laid siege to Calais. King Philip VI of France ordered the city to hold out at all costs.

Philip, unfortunately, failed to lift the blockade and starvation eventually forced the city to surrender.

Map of the Rodin Museum, Philadelphia

“Nothing is a waste of time if you use the experience wisely.”
– Auguste Rodin