“The Thinker” by Auguste Rodin

In 1889, Rodin exhibited the sculpture independently of “The Gates of Hell,” giving it the title “The Thinker,” and in 1902, he embarked on this larger version. It has since become one of his most recognized masterpieces.

There are various castings of the sculptures of “The Thinker” around the world. They are all usually placed on a stone pedestal.

The nude male figure sitting on a rock with his chin resting on one hand, deep in thought, is often used as an image to represent philosophy.

There are about 28 of the large or full-size castings, in which the figure is about 186 centimeters (73 in) high, though not all were made during Rodin’s lifetime or under his supervision. 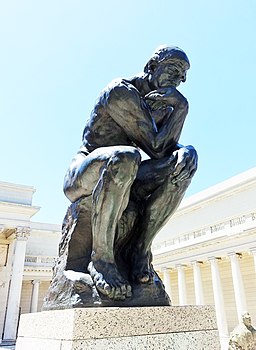 “The Thinker” by Auguste Rodin – Legion of Honor, San Francisco

There was also a limited edition of 12 copies made from the original plaster mold by the Musée Rodin after Rodin’s death.

Since, Rodin’s death, “The Thinker” has produced in several smaller size versions and several in plaster castings, in a range of sizes.

Amongst the various castings are the following: 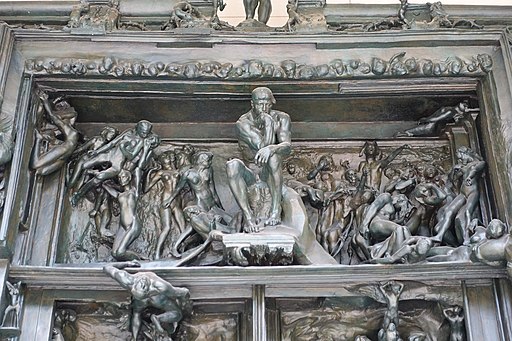 “The Thinker” Conceived initially for the Gates of Hell

“The Thinker” on the Gates of Hell

Conceived initially for “The Gates of Hell,” the sculpture that became “The Thinker” was initially a much smaller form that dominated the center of the lintel of the gates. The figure presides over the figures of the damned, depicted on the doors below the lintel.

Below him, the chaotic dance of death takes place. He sits apart with no symbol of his identification. Is he the poet, the creator, the judge, the sculptor?

Rodin based “The Gates of Hell” on The Divine Comedy of Dante, and most of the figures in work represented the characters in the epic poem.

Some speculate that “The Thinker,” at the center over the doorway and at about 70 cm high, which is larger than most other figures, was originally intended to depict Dante at the gates of Hell, pondering his poem.

The figures in the sculpture are mainly nude, especially “The Thinker” as Rodin wanted the figures represented in the tradition of Michelangelo, to represent intellect as well as poetry.

There are several museums where you can see copies of “The Thinker” made during Rodin’s lifetime. They are on a monumental scale, and they range in materials from Bronze to Plaster or Plaster with Bronze-tinted.

Cleveland Museum of Art version of “The Thinker”

A 1970’s bombing damaged Rodin’s “The Thinker” at the Cleveland Museum. The bomb was placed on a pedestal of the statue, and the statue’s base and lower legs were destroyed.

The cast was blown up at the bottom to form a ‘plume’ at the base.

The attack was assumed to have been made by a radical political group protesting the Vietnam War.

Suspicion fell on a group called the “Weathermen” and the “Students for a Democratic Society.” No one was ever arrested or charged with the destruction.

The bombing took place just weeks before National Guardsmen opened fire on protesters and students at Kent State University on May 4, 1970, and killed four.

The Museum decided that the statue should not be repaired but placed outside the Museum in its damaged condition, as a statement of how fragile is the social fabric that binds us all together.

Auguste Rodin is generally considered the father of modern sculpture. He possessed a unique ability to model a complex and deeply pocketed surface in clay.

Many of his most notable sculptures were criticized during his lifetime. Rodin’s most original work departed from traditional themes of mythology and allegory, he modeled the human body with realism and with individual character and physicality. 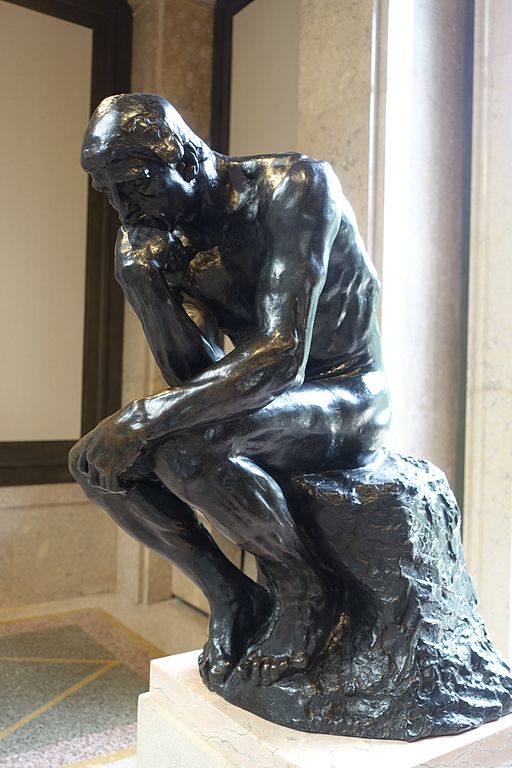 The Thinker by Auguste Rodin

“To the artist, there is never anything ugly in nature.”
– Auguste Rodin