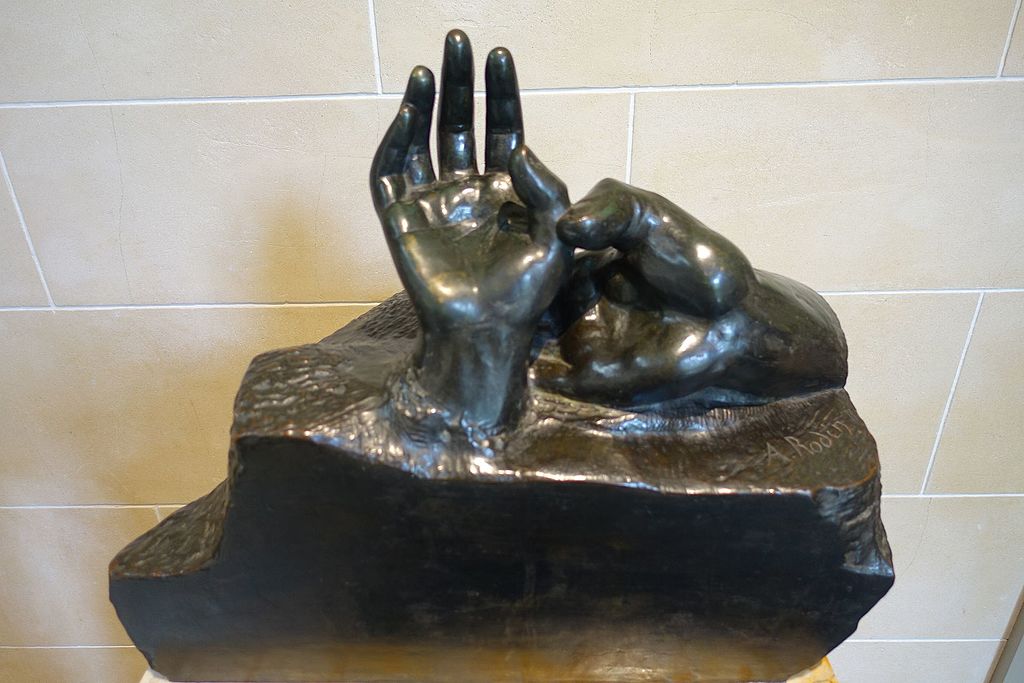 “Two Hands” was modeled by Auguste Rodin. A plaster version of this sculpture is inscribed “Hands of Rodin and Rose Beuret,” which suggests that these clasped hands are the hands of Rodin, the sculptor, and his lover. Rodin stated that he felt an:

“intense passion for the expression of the human hands.”

During his career, he modeled thousands of hands as small clay studies. For Rodin, the hand and the interplay of hands within groups of figures were expressive components of his sculptures.

Rodin imbued hands with a range of emotions, from anger and despair to compassion and kindness. He kept many hand clay studies in his studio, where he would contemplate them as sculptural forms in space.

This approach reinforced Rodin’s interest in the partial figure, and he felt that representations of parts of the body, such as the hand, are not necessarily dependent upon a complete figure to convey meaning.

Rose Beuret (1844 – 1917) was one of Rodin’s first models and his companion of fifty-three years. An uneducated woman from the countryside, she maintained Rodin’s studio in their youthful poverty, bore his son, and served him throughout her life.

Rodin began to live with a young seamstress Rose Beuret in 1864, and she was his companion for the rest of her life.

The couple had a son named Auguste-Eugène Beuret (1866–1934), but Rodin had a varying commitment to Rose. Rodin also had a passionate relationship with Camille Claudel, who was a younger sculptor.

Fifty-three years into his relationship with Beuret, Rodin did marry his lifelong companion, in the last year of both their lives.

The wedding was in January 1917, and Beuret died two weeks later. Rodin was ill that year and died in November of that same year, aged 77, at his villa in Meudon, Île-de-France, on the outskirts of Paris.

Six years later, Rodin’s secretary, published a book alleging that Rodin’s death was primarily due to cold and that he had no heat at his villa.

Rodin requested permission to stay in the Hotel Biron, a museum of his works, but the director of the museum refused to let him stay there.

A cast of The Thinker was placed next to Rodin’s tomb in Meudon; it was Rodin’s wish that the figure serves as his headstone and epitaph.

Boucher was a leading French sculptor, but when he moved to Florence, Boucher asked Auguste Rodin, his friend, to take over the instruction of his pupils.

This association began a long artistic association and a tumultuous and passionate relationship between Rodin and Claudel.

Around 1884, Claudel started working in Rodin’s workshop. She became a source of inspiration for him and acted as his model, confidante, and lover.

There is a national Camille Claudel Museum in Nogent-sur-Seine, and the Musée Rodin in Paris has a room dedicated to Claudel’s works.

“I don’t know where my road is going, but I know that I walk better when I hold your hand.”
– Alfred de Musset

“As you grow older, you will discover that you have two hands, one for helping yourself, the other for helping others.”
– Audrey Hepburn

“A man paints with his brains and not with his hands.”
– Michelangelo

“Infinite striving to be the best is man’s duty; it is its own reward. Everything else is in God’s hands.”
– Mahatma Gandhi

“When women kiss it always reminds one of the prizefighters shaking hands.”
–  H. L. Mencken

“I don’t need a successor, only willing hands to accept the torch for a new generation.”
– Billy Graham

“Ignorant men don’t know what good they hold in their hands until they’ve flung it away.”
– Sophocles