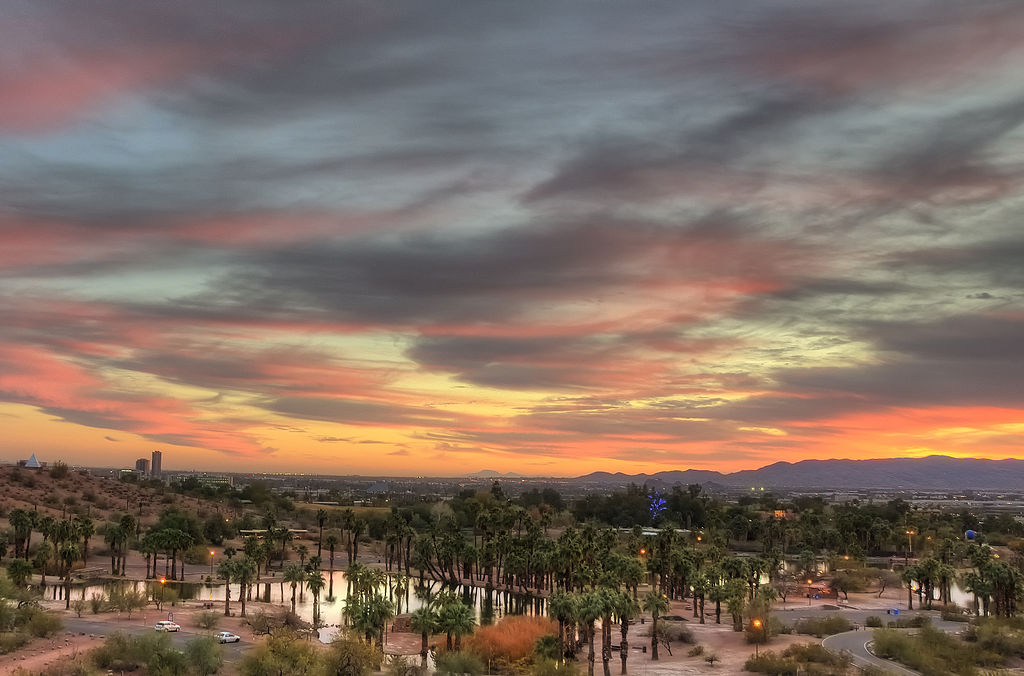 Phoenix is the capital of Arizona and the fifth most populous city in the United States. Phoenix is the anchor of the Phoenix metropolitan area, also known as the Valley of the Sun, which is part of the Salt River Valley.

Phoenix was settled in 1867 as an agricultural community and was incorporated as a city in 1881. It became the capital of the Arizona Territory in 1889.

Cotton, cattle, citrus, climate, and copper were known locally as the “Five C’s” anchoring Phoenix’s economy. These remained the driving forces of the city until after World War II when high-tech companies began to move into the valley.

Numerous museums can be explored throughout the valley. The Phoenix Art Museum has the southwest’s most extensive collection of visual art, containing more than 17,000 works of contemporary and modern art from around the world.

Virtual Tour of the Museums in Phoenix, Arizona

Highlights Tour of the Museums in Phoenix, Arizona

The Phoenix Art Museum is the largest museum for visual art in the southwest United States.

The Museum presents the stories of American Indian people and collaborates with American Indian artists and tribal communities to provide a unique perspective about the art of the Native peoples.

The mission of the Heard Museum is to be: “the world’s preeminent museum for the presentation, interpretation, and advancement of American Indian art, emphasizing its intersection with broader artistic and cultural themes.”

The Heard Museum was founded in 1929 with most of its initial collection from the La Ciudad Indian archaeological site.  The current collection of the Museum consists of over 40,000 items, including a library and archives with over 34,000 volumes.

The Musical Instrument Museum in Phoenix is the largest museum of its type in the world. The collection of over 15,000 musical instruments includes examples from nearly 200 countries.

The exhibit for each country features a video display showing local musicians performing on native instruments. The performances can be heard using a wireless device with headphones.

For countries with significant diversity, there are multiple displays for the different types of ethnic, folk, and tribal music.

The museum’s contemporary facility, which opened in 2010, offers two floors of galleries plus a theater for concerts.

The center provides demonstrations plus educational programs and science activities as a regular program.

The Desert Botanical Garden in Phoenix was established in 1939, and it now has over 50,000 plants. One-third of the collection are native to the area, including 379 species, which are rare, threatened, or endangered.

The Botanical Garden focuses on plants adapted to desert conditions, including samples from countries and regions such as Australia, Baja California, and South American.

The Garden offers workshops and lectures on landscaping, nature art, photography, and wellness. The Gardens are also a plant research institution.

Volunteers have been historically essential in the Garden’s creation and development and remain essential today for sharing their time, talents, and expertise.

The Pueblo Grande Ruin and Irrigation Sites are pre-Columbian archaeological sites in Phoenix, Arizona. They include a prehistoric platform mound and irrigation canals.

The Phoenix area was home to a thriving civilization called Huhugam by the culturally affiliated O’odham and the Hohokam peoples. These Ancestral Native Americans created the archaeological structures preserved at Pueblo Grande.

Pueblo Grande features a large platform mound with retaining walls. This massive structure contains over 20,000 cubic meters (yards) of fill. There were also many dwellings, and at least three ball courts.

The Hohokam people occupied the Phoenix area for over 2,000 years. They created roughly 135 miles (217 kilometers) of irrigation canals, making the desert land arable.

The Hohokam archaeological culture developed some of the largest and most advanced canal systems in all of pre-Columbian North America. They were the first people to practice irrigated agriculture in the region.

Museums and Culture in Phoenix

“The phoenix hope, can wing her way through the desert skies, and still defying fortune’s spite; revive from ashes and rise.”
– Miguel de Cervantes