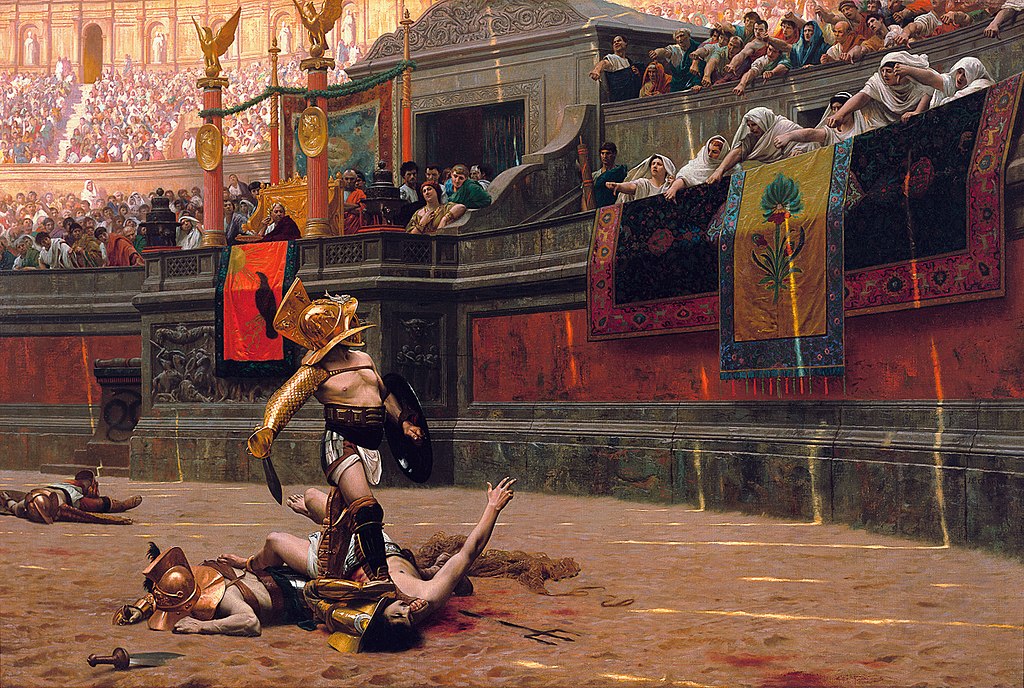 As a historical painting of the era, Pollice Verso was popular with viewers affording them a sense of moral superiority over previous cultures. This painting has been an inspiration for statues, pictures, films, and images of Gladiators.

The victorious gladiator in this painting is called a Murmillo. A Murillo-class gladiator was adopted in the early Imperial period to replace the earlier Gallus gladiators, named after the warriors of Gaul.

As the Gauls had become integrated into the Roman Empire by the time of the reign of Augustus, it became undesirable to portray them as enemy outsiders.

The Murillo fighting style was suited for big tall men with large muscular arms and strong, hefty shoulders needed to carry the weight of the shield and sword and heavy helmet.

The Murillo depended on his strength and endurance to survive the battle against foes who were more suited to attacking.  The Murmillo gladiator was heavily armed with the following equipment:

The defeated gladiator on the ground and underfoot in this painting is called a Retiarius. A Retiarius, which means “net-man” in Latin, was a Roman gladiator who fought with equipment styled on that of a fisherman.

The Retiarius gladiator was lightly armed with no head protection or footwear. They battled with the following equipment:

The net-fighter made up for his lack of protection armor by his speed and agility to avoid a heavily-armed opponent’s attacks and waiting for the opportunity to strike.

Retiarius gladiators would try to throw their nets over their rivals and attacked with their trident while their adversary was entangled. Alternative tactics included ensnaring the enemy’s weapons in the net to make the opponent defenseless.

In ancient Rome, the Vestals or Vestal Virgins were priestesses of Vesta, goddess of the hearth. They cultivated the sacred fire that was not allowed to go out.

The Vestals were freed of the usual social obligations to marry and bear children and took a 30-year vow of chastity to devote themselves to the study and correct observance of state rituals.

According to Plutarch, there were only two Vestal Virgins when the College of the Vestals began. This number was later increased to six. In this painting, we can see six white dressed Vestals.

Who was protecting the sacred fire that was not allowed to go out?

Jean-Léon Gérôme (1824 – 1904) was a French painter and sculptor, and his body of work includes historical paintings, Greek Mythology, Orientalism, and portraits in the academic painting tradition.

“Death smiles at us all. All we can do is smile back.”
– Marcus Aurelius from the movie Gladiator