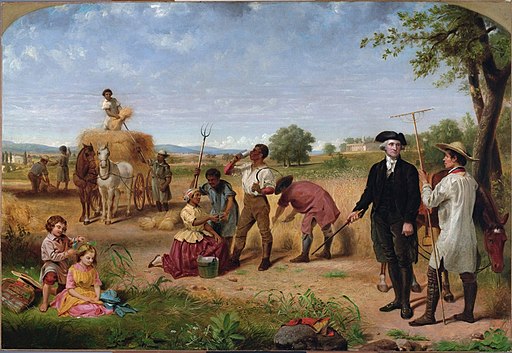 “Washington as Farmer at Mount Vernon” by Junius Brutus Stearns

Junius Brutus Stearns is best known for his “Washington Series,” 1847-1856, in which he chronicles George Washington’s life as a farmer at his plantation; citizen at his wedding; soldier at the French and Indian War; Christian on his deathbed, and the statesman at the Founding of the USA.

“Washington as Farmer at Mount Vernon” by Junius Brutus Stearns

“Washington as Farmer at “by Junius Brutus Stearns depicts the retired President inspecting the wheat harvest at his Virginia plantation.

Amongst the workers are several slaves, and two children are playing in the foreground. In the background can be seen the mansion built in a loose Palladian style.

Washington owned slaves, but later became troubled with the institution of slavery and freed his slaves in a 1799 will.

Stearns’s idealized portrayal of a harmonious system of farming ignores the growing national furor over the question of slavery. The “Compromise of 1850,” a tenuous congressional agreement between North and South, was already unraveling.

By occupation, Washington was a planter, and he imported luxuries and other goods from England, paying for them by exporting tobacco.

In 1765, because of erosion and other soil problems, Washington changed Mount Vernon’s primary cash crop from tobacco to wheat and expanded operations to include corn flour milling and fishing.

Before the War, Washington was counted among the political and social elite in Virginia. From 1768 to 1775, he invited some 2,000 guests to his Mount Vernon estate, mostly those whom he considered “people of rank.”

After his time as Commander in Chief in the War of Independence, Washington reactivated the direct supervision of his Mount Vernon plantation.

He oversaw the completion of the remodeling work at Mount Vernon, which transformed his residence into the mansion that survives to this day.

Mount Vernon had made no profit during his absence, and he saw persistently poor crop yields due to pestilence and poor weather.

After his Presidency, Washington retired to Mount Vernon in 1797 and devoted time to his plantations and other business interests, including his distillery.

His plantation operations were only minimally profitable, and his lands in the west were under Indian attacks and yielded little income.

Washington was thought to be rich because of the well-known “glorified façade of wealth and grandeur” at Mount Vernon, but nearly all his wealth was in the form of land and slaves rather than ready cash.

To supplement his income, he erected a distillery for substantial whiskey production.

Mount Vernon was the plantation of George Washington and his wife, Martha Washington. The estate is situated on the banks of the Potomac River in Fairfax County, Virginia.

Washington’s family owned land in the area since Washington’s great-grandfather in 1674. The mansion was extended by George Washington in the late 1750s and again in the 1770s.

Washington as Farmer at Mount Vernon

“Washington as Statesman at the Constitutional Convention” by Junius Brutus Stearns is the final work in the series painted by Stearns.

It represents Washington’s role as President of the 1787 Constitutional Convention in Philadelphia.

It depicts Washington urging the passage of a new federal constitution, a draft of which he holds in his hands.

Washington presided at the Constitutional Convention of 1787, which established the U.S. Constitution and a federal government.

Washington has been called the “Father of His Country” for his leadership in these formative days of the United States.

After the War of Independence, Washington believed the nation was vulnerable to foreign intervention and that a national constitution would unify the states under a stable central government.

Congress agreed to a Constitutional Convention to be held in Philadelphia in 1787, and each state was to send delegates.

Washington was chosen to lead the Virginia delegation, and Benjamin Franklin nominated Washington to preside over the convention, and he was unanimously elected to serve as president general.

Washington lobbied in support of the ratification of the Constitution and declared the alternative would be anarchy:

“The adoption of it under the present circumstances of the Union is, in my opinion, desirable.” 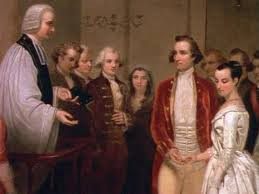 The marriage took place at Martha’s estate, and later they moved to Mount Vernon, near Alexandria, where he took up life as a planter of tobacco and wheat and emerged as a political figure.

The marriage gave Washington control over Martha’s one-third dower interest in the 18,000-acre (7,300 ha) Custis estate, and he managed the remaining two-thirds for Martha’s children; the estate also included 84 slaves.

He became one of Virginia’s wealthiest men, which increased his social standing.

She had first married Daniel Parke Custis, with whom she had four children and was widowed by the age of 25. She brought her vast wealth to her marriage to Washington, which enabled him to buy land to add to his estate.

Martha also brought with her nearly 1000 dower slaves for her use during her lifetime. They and their descendants reverted to her first husband’s estate at her death and were inherited by his heirs.

She and Washington did not have children together, but they did rear her two surviving children by Daniel Parke Custis. 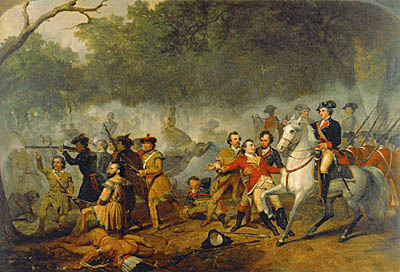 Washington received his initial military training and command with the Virginia Regiment during the French and Indian War.

The French and Indian War (1754–1763) pitted the colonies of British America against those of New France. Each side was supported by military units from the parent country and by American Indian allies.

At the start of the war, the French colonies had a population of roughly 60,000 settlers, compared with 2 million in the British colonies. The outnumbered French mainly depended on the Indians.

Under Washington, the Virginia Regiment had defended 300 miles (480 km) of the frontier against twenty Indian attacks in ten months.

He increased the professionalism of the regiment as it grew from 300 to 1,000 men. Some historians have said this was Washington’s only unqualified success during the war.

During his time in the “French and Indian War,” Washington gained self-confidence, leadership skills, and invaluable knowledge of British tactics.

Junius Brutus Stearns (1810 — 1885) was an American painter best known for his five-part Washington Series (1847–1856). He was a member of the National Academy of Design for several decades and a member of its Council.

Stearns’ painting, “Washington as a Statesman,” depicting President Washington addressing the Constitutional Convention, was the subject of a U.S. Postage Stamp in 1937. 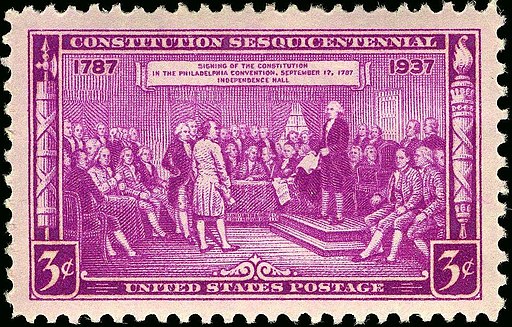 Biography of the life of George Washington

Highlights of the Virginia Museum of Fine Arts

The Genius of General Washington

“Heroes have made poets and poets heroes.”
– George Washington