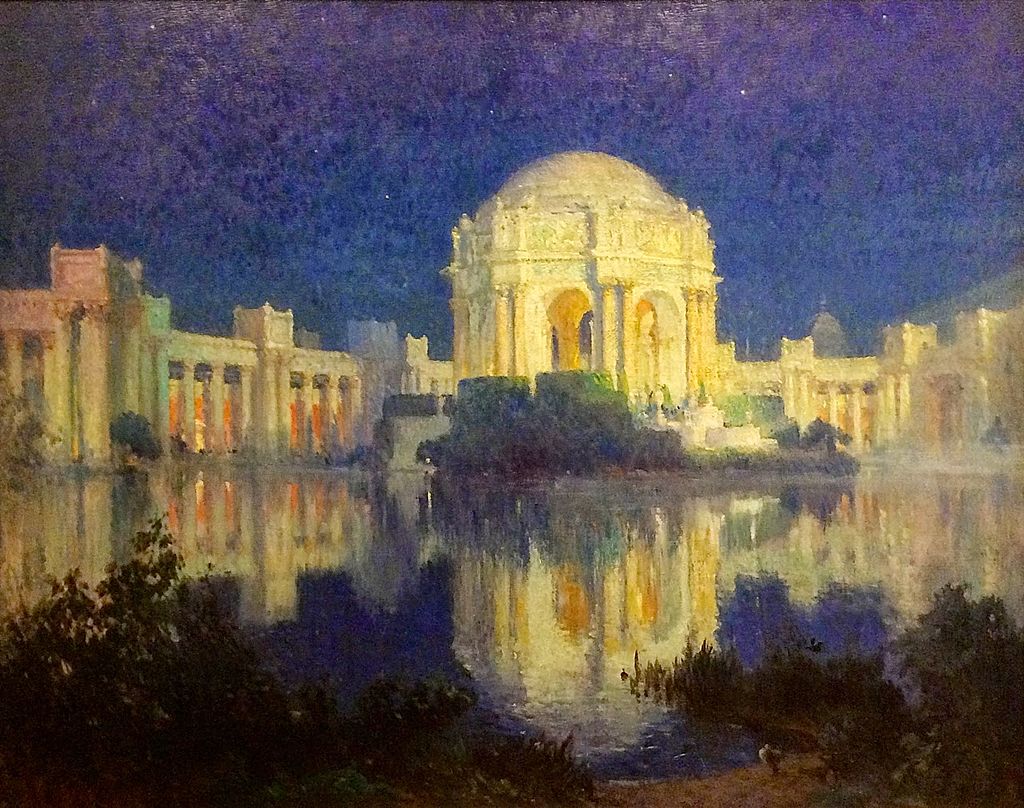 This painting shows the original structure before it was completely rebuilt from 1964 to 1974. It is one of only a few surviving structures from the Exposition. A renovation of the lagoon, walkways, and a seismic retrofit were completed in early 2009.

The most prominent building of the complex, a 162 feet (49 m) high open rotunda, is enclosed by a lagoon on one side and is neighboring a large, curved exhibition center on the other side, separated from the lagoon by colonnades.

Conceived to evoke a decaying ruin of ancient Rome, the Palace of Fine Arts became one of San Francisco’s most recognizable landmarks.

The 1915 Exposition featured the largest collection of art that the city had seen with hundreds of examples of Impressionism, Post-Impressionism art styles.

Colin Campbell Cooper, who was nearly 60, had long embraced Impressionism. In this painting, he applies the color and brushwork of Impressionism to a nocturnal depiction of the buildings under a sky with stars.

Cooper taught at the Drexel Institute, Philadelphia, between 1895 and 1898. He then moved to New York City, where he painted the city’s new skyscrapers. Cooper’s first trip to California was to visit the Panama-Pacific International Exposition in San Francisco.

Cooper exhibited in the Exposition of 1915, winning the gold medal for oil and the silver medal for watercolor. He created a series of paintings depicting the exposition’s buildings, including the Palace of Fine Arts.

He also participated in the Panama–California Exposition in San Diego in 1916. The Coopers spent the winter of 1915–16 in Los Angeles and later decided to move there permanently.

Cooper was an avid traveler; he was also known for his paintings of European and Asian landmarks and natural landscapes, portraits, florals, and interiors.

Cooper moved to Santa Barbara, California, in 1921, which became his home base for the rest of his life. He also became Dean of Painting at the Santa Barbara Community School of Arts.

“Palace of Fine Arts and the Lagoon” by Edwin Deakin

“Palace of Fine Arts and the Lagoon” by Edwin Deakin

“Palace of Fine Arts and the Lagoon” by Edwin Deakin depicts the pergola around a central rotunda situated by the artificial lagoon. The lagoon was intended to echo those found in classical settings in Europe.

The expanse of water provides a mirror surface to reflect the grand buildings and an undisturbed vista to appreciate the structures from a distance. At seventy-seven, Deakin found inspiration in this view, which he painted several times after the exposition’s close.

Today, Australian eucalyptus trees fringe the eastern shore of the lagoon. Many forms of wildlife have made their home there, including swans, ducks, geese, turtles, frogs, and raccoons.

Edwin Deakin (1838 – 1923) was an artist best known for his romantic landscapes and his architectural studies, especially the Spanish colonial missions of California.

His sensitive and highly publicized depictions of the deteriorating missions drew public attention to the necessity of restoring these historically important monuments.

His still lifes are considered to be some of the finest of the genre. Deakin is one of the artists who popularized scenes of San Francisco’s Chinatown.

Palace of Fine Arts and the Lagoon

The Palace of Fine Arts has been depicted in many popular films and TV shows. It also influenced the city of Theed on Naboo as it appears in the film Star Wars: Episode I.

The structure was also featured in computer games, and a smaller replica of the Palace of Fine Arts’s rotunda was built in Disney’s California Adventure in Anaheim.

“San Francisco has only one drawback – it is hard to leave.”
– Rudyard Kipling