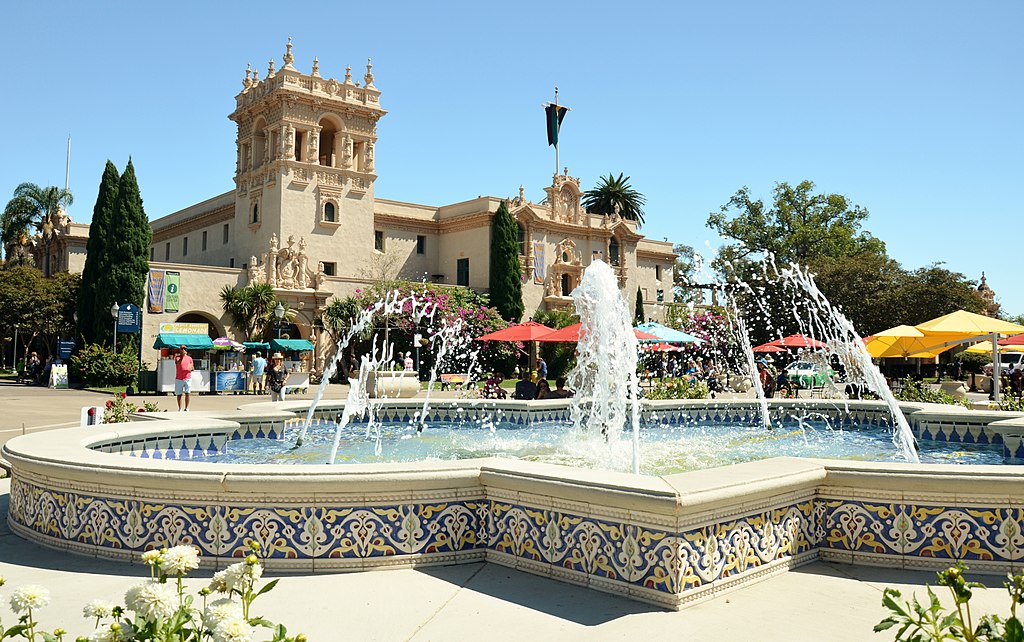 San Diego, on the coast of the Pacific Ocean, is approximately 120 miles (190 km) south of Los Angeles and adjacent to the border with Mexico.

The city is known for its mild climate, deep-water harbor, beaches, and its healthcare and biotechnology development center.

Historically home to the Kumeyaay people, it was the first site visited by Europeans in 1542 when a Spanish explorer claimed the area for Spain.

The Presidio and Mission San Diego de Alcalá, founded in 1769, formed the first European settlement in what is now California.

California soon became part of the United States in 1848 following the Mexican–American War and was admitted to the union as a state in 1850.

San Diego has many popular museums located in Balboa Park, which also have branches located in Santa Fe Depot downtown.

The Columbia district downtown is home to historic ship exhibits belonging to the San Diego Maritime Museum, as well as the San Diego Aircraft Carrier Museum.

Virtual Tour of the Museums in San Diego, California

Highlights Tour of the Museums in San Diego

The USS Midway Museum is a historic naval aircraft carrier museum that houses an extensive collection of aircraft and military history.

The USS Midway was the United States’ longest-serving aircraft carrier of the 20th century, from 1945 to 1992. It was the only carrier to serve the entire length of the Cold War and beyond.

Midway opened as a museum ship in 2012 and typically hosts hundreds of events a year, including active-duty Navy retirements, re-enlistments, and changes of command.

The San Diego Natural History Museum was founded in 1874 and is the second oldest scientific institution west of the Mississippi. The facility is located in Balboa Park and was dedicated in 1933.

In 1991, the addition of the new wing to the museum provided a significant increase with five new exhibition halls and a new theater complex.

The museum also has over a thousand watercolors of California plants painted in the early 1900s.

The San Diego Natural History Museum serves as the significant biodiversity repository in the region, conducting field research across a range of scientific disciplines.

The Museum of Us is a museum of anthropology that is housed in historic landmark buildings located in Balboa Park, San Diego. The museum traces its origins to the Panama-California Exposition, which opened in 1915.

The museum is housed in four original buildings from the 1915 Exposition. The central exhibit of the 1915 exposition was “The Story of Man through the Ages.”

Between 1935 and 1936, the museum’s name briefly changed to the “Palace of Science” to effectively participate in the California-Pacific International Exposition.

The name of the museum then changed to “Museum of Man” in 1942 to emphasize the museum’s concentration on anthropology.

The San Diego Museum of Art

The San Diego Museum of Art houses a broad art collection with particular strength in Spanish art. The Museum first opened as The Fine Arts Gallery of San Diego in 1926 and changed its name to its current form in 1978.

The museum building was designed in a plateresque style to harmonize with existing structures, in Balboa Park, from the Panama–California Exposition of 1915.

The dominant feature of the façade is a heavily ornamented door inspired by a doorway at the University of Salamanca in Spain.

The Cathedral of Valladolid, in Spain, also influenced the Museum’s exterior design, and the interior motifs are derived from the Santa Cruz Hospital of Toledo, Spain.

In 1966 the Museum added a west wing and a sculpture court and an east wing in 1974.  The San Diego Museum of Art is regarded as the region’s oldest and largest art museum.

San Diego Air & Space Museum is an aviation and space exploration museum located in Balboa Park. The museum first opened in 1963, and 2005 the museum became affiliated with the Smithsonian Institution.

The museum is divided into many galleries including:

The Museum of Photographic Arts was founded in 1974 and opened in 1983. It is one of three museums in the US dedicated to the collection and preservation of photography.

The museum’s mission is to inspire, educate, and engage the broadest possible audience through the presentation, collection, and preservation of photography, film, and video.

In 2000, the museum expanded its gallery space and added a classroom, a theater, a print viewing room, and a 20,000-volume library.

The San Diego Model Railroad Museum is a large set of model railroad exhibits. At 27,000 sq. ft., it is the largest model railroading indoor exhibit in North America.

Model railroading consists of rail transport systems that are modeled at a reduced scale. The scale models include locomotives, rolling stock, streetcars, tracks, signaling, and landscapes.

The museum also has a specialized not-circulating library related to both model railroading and real railroads. The library collection includes books, magazines, videotapes, blueprints, and other materials for research.

The model railroads were built and are maintained by local railroad clubs, which exhibit their respective displays.

The San Diego Museum of Art

Virtual Tour of Museums in California