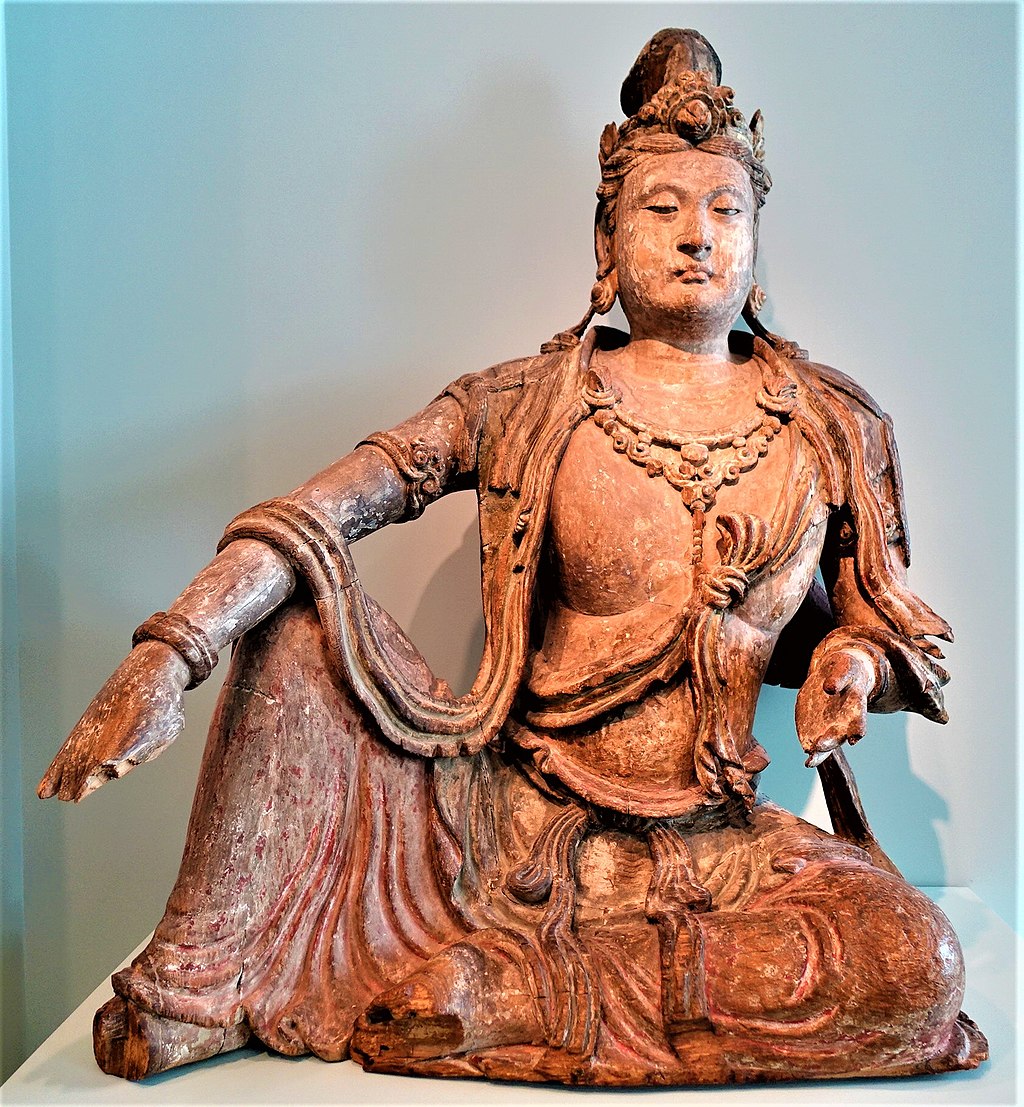 This wooden statue of Avalokiteśvara is a bodhisattva from China’s Song Dynasty of about 960 – 1279. Seated in a position of the “royal ease” with the right hand resting on a bent right knee and the left hand in the gift-granting gesture. The image is dressed as an Indian prince with long and fluid garments; and with sashes, scarves and jewels.

Bodhisattvas are a favorite subject in Buddhist art and are variably portrayed in different cultures as either female or male.

In Chinese Buddhism, Avalokiteśvara has become a somewhat different female figure called “Guanyin.” Guanyin is an East Asian bodhisattva commonly known as the “Goddess of Mercy” in English.

The Chinese name Guanyin is short for Guanshiyin, meaning “[The One Who] Perceives the Sounds of the World.”

Faith in China during the Song period had an increasing effect on people’s lives and beliefs as Chinese literature on spirituality became popular.

The principal deities of Daoism, Buddhism, plus Ancestral spirits and the many Chinese folk deities were worshipped with sacrificial offerings.

More Buddhist monks from India traveled to China during the Song Era than in the earlier Dynasties.

With the growing prosperity and economy during this period, increasingly more foreigners traveling to China to conduct their trade or live permanently, there arrived many foreign religions included Muslims, Jews, and Persians.

Emperor Taizu of Song founded the Song dynasty, which lasted from 960 to1279. The Song government was the first in world history to issue banknotes or paper money nationally and the first Chinese government to set up a permanent standing navy.

This dynasty also saw the first practical use of gunpowder, as well as the first discernment of true north using a compass.

Social life during the Song dynasty was vibrant. Citizens gathered at town and city centers to view and trade precious artworks, the populace intermingled at public festivals and private clubs, and cities had lively entertainment quarters.

The spread of literature and knowledge was enhanced by the rapid expansion of woodblock printing and the 11th-century invention of movable-type printing.

Technology, science, philosophy, and engineering flourished throughout the Song era.

The institution of the civil service examinations became even more prominent in the Song period, leading to a shift from the earlier military-aristocratic élite to a bureaucratic élite.

A Tour of the Asian Art Museum

The Story of Kuan Yin- Avalokiteshvara