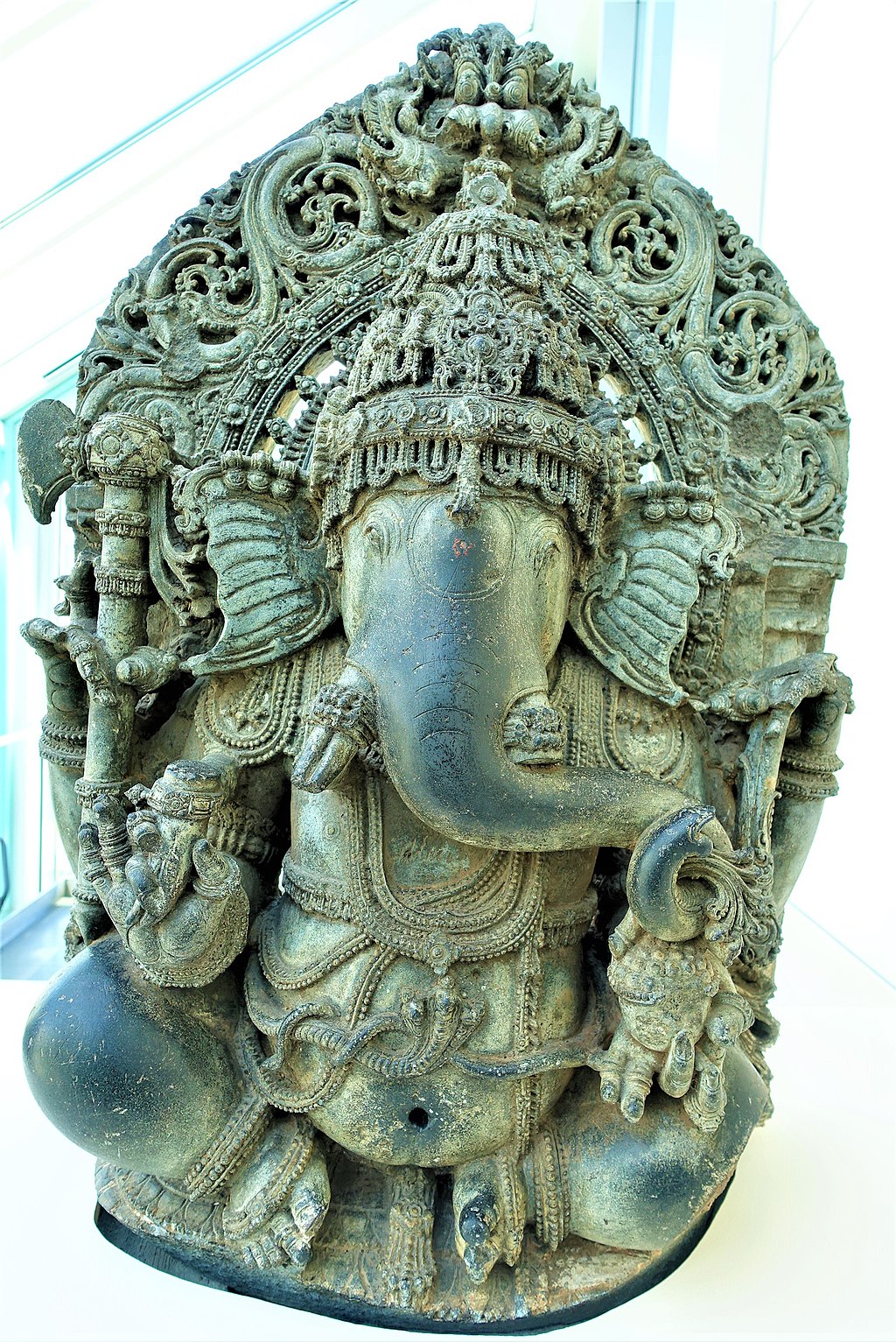 This “Seated Ganesha” is a sculpture showing Ganesha crowned and bejeweled. He is holding objects associated with one of India’s beloved gods: a battle-ax, a lotus, a bowl of sweets, and his broken tusk. Ganesha’s elephant head and his multiple arms is a mark of his divine nature. Elephants carry complicated symbolism in Indian culture and have long been associated with fertility and prosperity.

Ganesha is one of the best-known and most worshipped deities in the Hindu pantheon. One of the Ganesha stories involves a battle with a powerful demon that had terrorized the gods. One of Ganesha’s tusks was broken during the struggle, which speared the demon and transformed him into a rodent.

Ganesha’s image can be found throughout India, Sri Lanka, Thailand, and Nepal. Commercial and cultural contacts extended India’s influence in Asia, and Ganesha is one of many Hindu deities who consequently reached many foreign lands.

Devotion to Ganesha is widely spread and extends to Jains and Buddhists. Ganesha’s elephant head makes him easy to identify. He is worshipped as the lord of beginnings and as the lord of removing obstacles. He is also the patron of arts and sciences and the god of intellect and wisdom.

Ganesha is a popular figure in Indian art with depictions that have wide variations and distinct patterns in its visual history. Ganesha has been portrayed standing, dancing, heroically fighting demons, playing with his family as a boy, or sitting down on a high seat, or engaging in a range of contemporary situations.

Ganesha images were prevalent in many parts of India by about the 6th century. The influence of ancient iconographic elements in this example from the 13th century can still be seen in contemporary representations of Ganesha.

A Tour of the Asian Art Museum

“It is better to make a vow of silence than to utter falsehoods.”

“The cruel are feared even by the wise.”

“When we take one step toward God, he takes seven steps toward us.”

“I had no shoes and complained until I met a man who had no feet.”

“A man becomes like those whose society he loves.”

“Fatigue is the best pillow.”

“Life is not a continuum of pleasant choices, but of inevitable problems that call for strength, determination, and hard work.”

“Shall we teach the Architect of the Universe how to build?”

“The most beautiful things in the universe are the starry heavens above us and the feeling of duty within us.”

“To give quickly is a great virtue.”

“A man in this world without learning is as a beast of the field.”

“Meditate on your own defects, not that of others.”

“Death, dreaded through life, is not perceived when he arrives.”

“Listen, or thy tongue will keep thee deaf.”

“They who give have all things; they who withhold have nothing.”

“Anger has no eyes.”

“Help thy brother’s boat across, and lo! thine own has reached the shore.”

“It is a cart if it travels well, else it is but timber.”

“Like the body that is made up of different limbs and organs, all mortal creatures exist depending upon one another.”

“Of what use is the veil if you are going to dance.”

“For the friendship of two, the patience of one is required.”

“Where love reigns, the impossible may be attained.”

“God is Light more resplendent than all the Suns put together.”

“If you ask the hungry man how much is two and two, he replies four loaves.”

“Sit on the bank of a river and wait: Your enemy’s corpse will soon float by.”

“To the mediocre, mediocrity appears great.”

“Dictators ride to and fro upon tigers from which they dare not dismount.”

“Saints fly only in the eyes of their disciples.”

“Dig a well every day to drink water every day.”

“Danger should be feared when distant, and braved when present.”

“Dig your well before you’re thirsty.”

“Humility is not cowardice. Meekness is not weakness. Humility and meekness are, indeed, spiritual powers.”

“The pain is sometimes preferable to the treatment.”

“The more you nourish the anxiety of the heart, quarrels, and disorders, the more they increase.”

“The storm may uproot the trees, but not the mountains.”

“He who does kind deeds becomes rich.”

“The worth of the shade is only known when the sun is beating down hot.”
– Indian Proverb