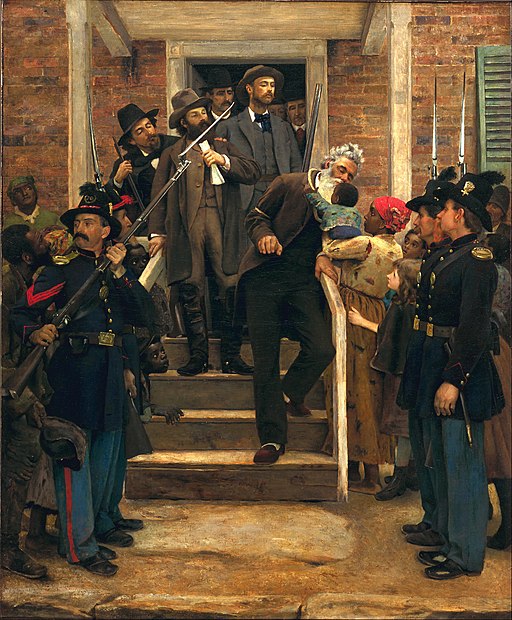 “The Last Moments of John Brown” by Thomas Hovenden

“The Last Moments of John Brown” by Thomas Hovenden depicts abolitionist John Brown (1800–1859) being taken to his execution in Charles Town, Virginia (now West Virginia), in 1859.

Brown believed in and advocated armed insurrection as the only way to overthrow slavery in the United States. Brown’s actions as an abolitionist and the tactics he used still make him a controversial figure.

He is both memorialized as a heroic martyr and visionary and vilified as a madman and a terrorist. Hovenden’s heroic image of Brown recalls a Moses type figure.

His vision of freedom for future generations of African Americans was symbolized by the false legend of Brown blessing the slave child.

A few months before the event depicted in this painting, Brown led a raid on the federal armory at Harpers Ferry, Virginia (today West Virginia), intending to start a slave liberation movement.

He seized the armory, but seven people were killed, and ten or more were injured. He intended to arm slaves with weapons from the arsenal, but only a small number of local slaves joined his revolt.

Within 36 hours, those of Brown’s men who had not fled were killed or captured by local farmers, militiamen, and US Marines, the latter led by Robert E. Lee.

He was hastily tried for treason against the Commonwealth of Virginia, the murder of five men, and inciting a slave rebellion.

Brown was found guilty on all counts and was hanged. He was the first person convicted of treason in the history of the country.

The Harpers Ferry raid and Brown’s trial escalated tensions that led to the South’s secession a year later and the American Civil War.

Brown’s raid and his hasty trial electrified and polarised the nation. Southerners feared that it was just the first of many Northern plots to cause a slave rebellion that might endanger their lives.

In the north, many abolitionists viewed Brown as a martyr, sacrificed for the sins of the nation. “John Brown’s Body” became a popular Union marching song that portrayed him as a martyr.

“I, John Brown, am now quite certain that the crimes of this guilty land will never be purged away but with blood. I had, as I now think, vainly flattered myself that without very much bloodshed it might be done.”

That morning he read his Bible and wrote a final letter to his wife, which included his will. At 11:00 a.m., he was escorted from the county jail through a crowd of 2,000 soldiers a few blocks away to a small field where the gallows were.

Among the soldiers in the group were future Confederate general Stonewall Jackson and John Wilkes Booth, who had borrowed a militia uniform to gain admission to the execution.

The sheriff and his assistants accompanied Brown, but no minister since he had consistently rejected the ministrations of pro-slavery clergy. He was hanged at 11:15 a.m. and pronounced dead at 11:50 a.m.

Hovenden was born in Ireland, but his parents died at the time of the potato famine, and he was placed in an orphanage at the age of six. Apprenticed to a carver and gilder, he studied at the Cork School of Design.

In 1863, he immigrated to the United States, where he studied at the National Academy of Design in New York City then to Paris in 1874.

He studied at the École des Beaux-Arts but spent most of his time with the American art colony at Pont-Aven in Brittany.

Returning to America in 1880, he was appointed Professor of Painting and Drawing at the Pennsylvania Academy of the Fine Arts in 1886.

Martyr or murderer? Hovenden’s The Last Moments of John Brown

The Life and Times of John Brown

“Whenever I hear anyone arguing for slavery,
I feel a strong impulse to see it tried on him personally.”
– Abraham Lincoln