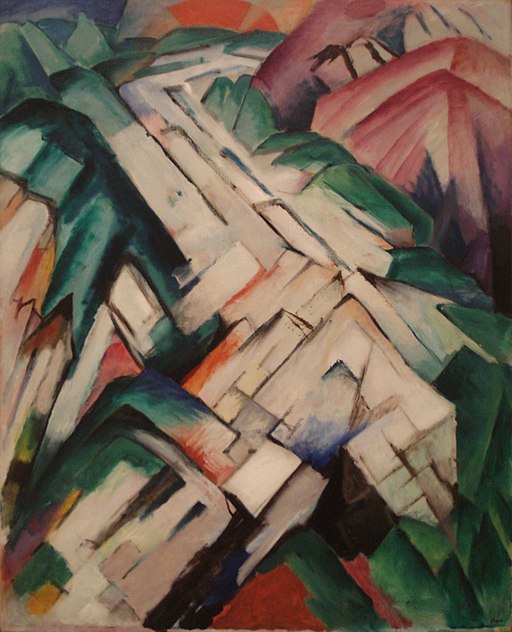 Mountains by Franz Marc depicts the stepping stones of a mountain that reach to the orange sun at the summit.  Marc’s desire to attain a higher state of spirituality is shown in this expression of wanting to go towards a higher realm.

This painting was first painted in 1911 and was titled “Landschaft” (Landscape). It was then repainted in 1912 after Marc visited Robert Delaunay in Paris as a new version, retitled “Gebirge” (Mountains).

The renewed version was fused with the influences of Orphism, Cubism, and Futurism, making it Marc’s most multi-style painting.

Delaunay’s Orphism, which focused on abstraction and brilliant hues are reflected in Marc’s different color planes, which combine to create a surface of multicolored light.

Cubism is suggested by the fractured, prismatic forms that define the landscape. The thrusting prisms also generate a dynamic, colorful effect reminiscent of Futurism.

Franz depicts a period in his life where he strives for spiritual enlightenment. Exhibited at the San Francisco Museum of Modern Art, it is representative of an era where art’s purpose was to convey emotions.

Orphism, a term coined in 1912, was an offshoot of Cubism that focused on pure abstraction and bright colors.

It was influenced by Fauvism, the theoretical writings of Paul Signac, Charles Henry, and the color theorist Eugène Chevreul.

Orphism is seen as key in the transition from Cubism to Abstract art, pioneered by artists who relaunched the use of color during the monochromatic phase of Cubism.

Cubism is an early-20th-century art movement that revolutionized European painting and sculpture. The term is broadly used in association with a wide variety of art produced in Paris during the 1910s and throughout the 1920s.

The movement was pioneered by Pablo Picasso and Georges Braque and joined by many artists of the period. A primary influence that led to Cubism was the representation of three-dimensional form in the works of Paul Cézanne.

In Cubist artwork, objects are analyzed, broken up, and reassembled in an abstracted form. The artist depicts the subject from a multitude of viewpoints to represent the subject in a greater context.

In France, offshoots of Cubism developed, including Orphism and Abstract art.

Futurism was an artistic movement that originated in Italy in the early 20th century. It emphasized speed, technology, youth, violence, and industrial objects such as the car, the airplane, and the industrial city.

It glorified modernity and aimed to liberate Italy from the weight of its past. Cubism contributed to the formation of Italian Futurism’s artistic style.

Marc showed several of his works in the first Der Blaue Reiter exhibition in Munich between 1911 and 1912. As it was the apex of the German expressionist movement, the exhibit also showed in Berlin, Cologne, Hagen, and Frankfurt.

By 1912, Marc became fascinated by FuturismFuturism and Cubism, and he created art that increasingly was stark and abstract. He painted The Tiger and Red Deer in 1912 and The Tower of Blue Horses, Foxes, and Fate of the Animals in 1913, in the years just before the Great War.

“I never, for instance, have the urge to paint animals ‘the way I see them,’ but rather the way they are… The way they look at the world and feel their being.”‘

“Today, art is moving in the direction of which our fathers would never even have dreamed. We stand before the new pictures as in a dream, and we hear the apocalyptic horsemen in the air. ”

Franz Marc: A collection of works