“Zapatistas” by Alfredo Ramos Martínez depicts the soldiers led by Emiliano Zapata that took part in the Mexican Revolution. The Zapatistas were formed in 1910 in southern Mexico  and were formerly known as “The Liberation Army of the South.”

The Zapatistas were mainly poor peasants who needed to spend much of their time working their land to feed their families. As a result, Zapatista soldiers tended to serve for several months at a time, and then return home to spend most of the year farming.

The structure of the Zapatista army was very loose, and the army was united entirely by the charismatic leadership of Zapata. It was divided into small, mostly independent units rarely numbering more than one hundred men, each commanded by a chief.

Colonels and captains commanded smaller bands. Captains were unofficially proclaimed captains by their unit. Sub-officer ranks were introduced late in the revolution to create a more disciplined force.

One of Zapata’s famous dictums was:

“a robber I can forgive, but a traitor… never.”

Emiliano Zapata’s assassination in 1919 struck a mortal blow to Zapatistas, and the army slowly disbanded afterward.

In this painting, Ramos Martínez captured the desperation and determination of the peasant farmers and casual soldiers who were looking for social justice and equity against the privileged elite.

Emiliano Zapata Salazar (1879 – 1919) was a leading figure in the Mexican Revolution. He was the main leader of the peasant revolution in the state of Morelos, and the inspiration of the agrarian movement called Zapatismo.

One of the most symbolic phrases of Zapatismo was that the land belongs to the tiller, reflecting a kind of agrarian socialism. Zapata tried to restore possession of the land to the peasant classes in the south.

Zapata remains an iconic figure in Mexico, used both as a nationalist symbol as well as a symbol of the neo-Zapatista movement. 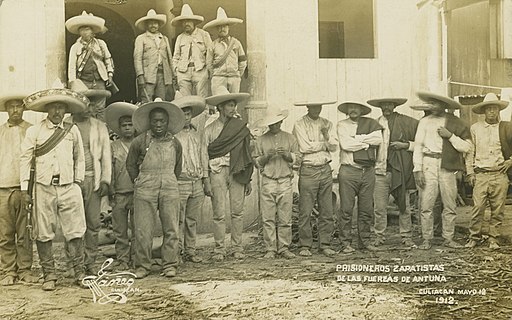 The Mexican Revolution was a major armed struggle, lasting roughly from 1910 to 1920, that transformed Mexican culture and government.

Its outbreak in 1910 resulted from the failure to find a managed solution to presidential succession. This competition for political leadership meant there was a political crisis among competing elites and the opportunity for agrarian insurrection.

Although the conflict was primarily a civil war, foreign powers such as the United States, which had economic and strategic interests in Mexico, figured in the outcome of Mexico’s power struggles.

The revolution created the resulting political regime that lasted until Mexico underwent an economic liberal reform process that started in the 1980s.

Alfredo Ramos Martínez (1871 – 1946) was a painter, muralist, and educator, who lived and worked in Mexico, Paris, and Los Angeles. He is considered to be the “Father of Mexican Modernism.”

Ramos Martínez is known for his serene and empathetic paintings of traditional Mexican people and scenes.

In addition to his mastery of all conventional art media, Ramos Martínez was an extremely skilled muralist who excelled in the technically challenging art of traditional fresco painting.

Virtual Tour of the San Francisco Museum of Modern Art

“A robber I can forgive, but a traitor… never.”
– Emiliano Zapata