Cycladic Figures originated from the ancient Cycladic culture, which flourished in the islands of the Aegean Sea from c. 3300 to 1100 BCE.

The best-known cultural objects of this period and culture are the marble figures, usually called Cycladic “idols” or “figurines.”

The Cyclades is a group of Greek islands, southeast of the mainland in the Aegean Sea. It centers on the island of Delos, considered the birthplace of Apollo and home to some of Greece’s most important archaeological ruins.

These ancient marble figures were famous among the people of Crete and Greece and are found scattered around the Aegean.

Along with the Minoan civilization and Mycenaean Greece, the Cycladic people are counted among the three dominant Aegean cultures. 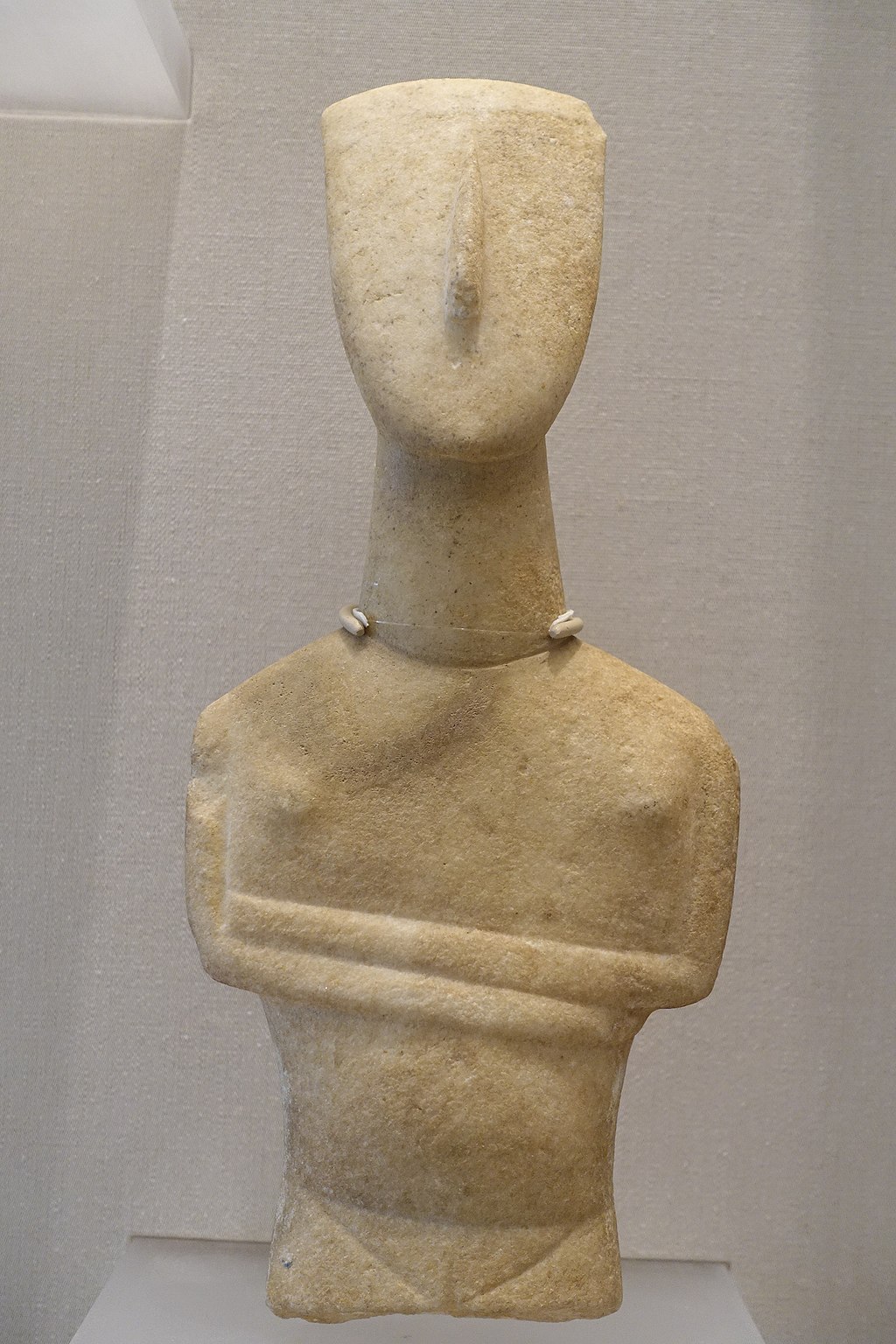 A Cycladic figure of the Spedos variety with lower torso and legs are missing.

The majority of these marble figures are highly stylized representations of the female human form, typically having a flat, geometric quality.

They are depicted nude with arms folded across the stomach, and the right arm held below the left. Featuring long, lyre-shaped head, a semi-conical nose, sloping shoulders, narrow arms, and rounded back.

Although there is no consensus, experts assume they are representative of a Great Goddess of nature, in a tradition similar to that of Neolithic female figures such as the Venus of Willendorf.

This figure with the head tilted back on an elegantly refined long neck does not have a flat stomach, but appears to be pregnant.

Two of these figures are masterfully crafted sculptures that have been identified as the work of an artist known as the Goulandris Master.

As with The Stargazer, all we can do is speculate on the creative and spiritual forces that created a beautiful, mystical figure that gives them a striking resemblance to today’s modern art. These figures represent the human body in its most pure and essential shape.

In more recent times, artists such as Picasso, Matisse, and Moore respected and collected Cycladic art as models of how one can create emotionally charged yet highly abstracted forms.

A Rare Cycladic Figure from the 3rd Millennium B.C.

A Tour of The Legion of Honor

Making a Cycladic figurine of around 2500 BC

A Tour of Museums in San Francisco

Cycladic Female Figure – Coloring the Past

“I declare
That later on,
Even in an age unlike our own,
Someone will remember who we are.”
– Sappho

Photo Credit: 1) GM 2) By I, the copyright holder of this work, hereby publish it under the following license: [Public domain], via Wikimedia Commons