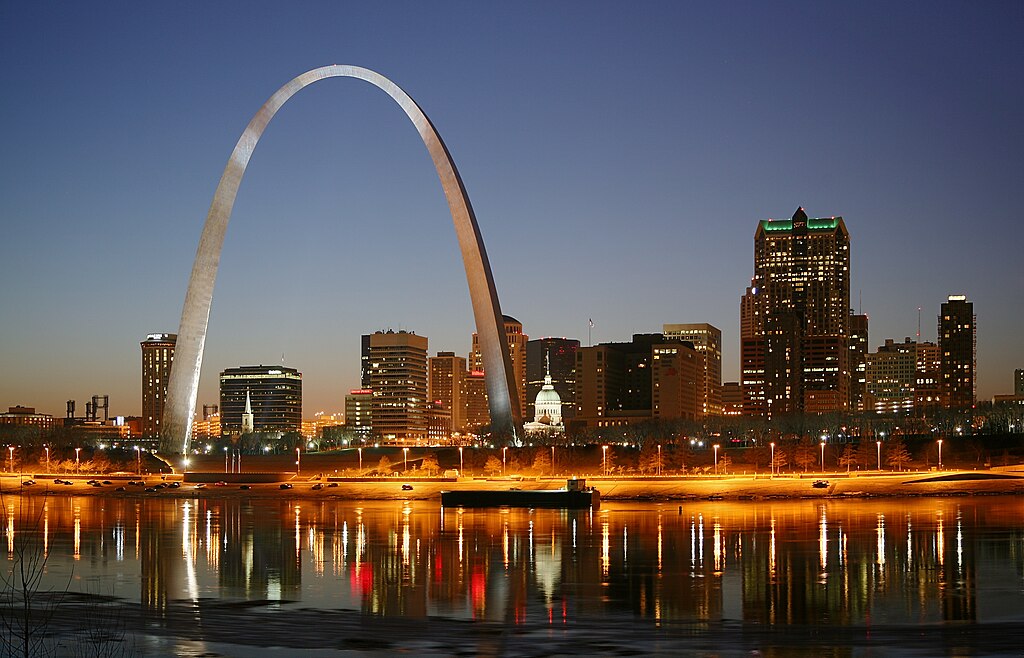 St. Louis is situated along the western bank of the Mississippi River, which marks Missouri’s border with Illinois. The Missouri River merges with the Mississippi River just north of the city. These two rivers combined form the fourth longest river system in the world.

Before European settlement, the area was a regional center of Native American Mississippian culture. The city of St. Louis was founded in 1764 by French fur traders and named after Louis IX of France.

In 1803, the United States acquired the territory as part of the Louisiana Purchase. During the 19th century, St. Louis became a major port on the Mississippi River; at the time of the 1870 Census, it was the fourth-largest city in the country.

St. Louis hosted the 1904 World’s Fair and some of its permanent facilities remaining at Forest Park include, St. Louis Art Museum, St. Louis Zoo, the Missouri History Museum, as well as Tower Grove Park and the Botanical Gardens.

St. Louis Art Museum was built for the 1904 World’s Fair and today the museum houses paintings, sculptures, and cultural objects.

The museum is located in Forest Park, and admission is free. The City Museum is a playhouse museum, consisting mostly of repurposed architectural and industrial objects in the Washington Avenue Loft District.

Virtual Tour of the Museums in St. Louis

Highlights Tour of the Museums in St. Louis

The Saint Louis Art Museum is an art museum with paintings, sculptures, cultural objects, and ancient masterpieces from all across the world.

The museum was founded in 1879 as the Saint Louis School and Museum of Fine Arts and moved after the 1904 World’s Fair to the Palace of Fine Arts, built for the World’s Fair.

An expanded facility opened in 2013 and today, the museum’s collection over 30,000 artworks dating from antiquity to the present.

The Missouri History Museum was founded in 1866 and is located in the Jefferson Memorial Building, which was built in 1913. The museum’s collection includes national artifacts, as well as Missouri and St. Louis related history.

The Museum offers both continuing permanent exhibits as well as short-term special exhibits. These exhibits reflect a commitment to explore the histories of those who call the St. Louis and Missouri home.

The museum is situated in Forest Park, a public park in western St. Louis, Missouri. The park has hosted several significant events, including the Louisiana Purchase Exposition of 1904 and the 1904 Summer Olympics.

The City Museum exhibits repurposed architectural and industrial objects that can be explored entertainingly. It opened in 1997, and it represents space of artistic expression with industrial exhibits that provide an eclectic urban experience.

A giant whale dominates the lobby, which leads to a series of tunnels with different destinations. The second floor’s many attractions include a space with about 1,000 safety deposit boxes and many other industrial objects and architectural features.

The third floor is home to several attractions, which include a collection of skateboard ramps. The roof has a Ferris wheel, a small pond with stepping stones, and a school bus extending past the edge of the building.

A circus ring and other performance areas offer live acts, and the museum has also hosted concerts. The Shoelace Factory has antique braiding machines that make colorful shoelaces.