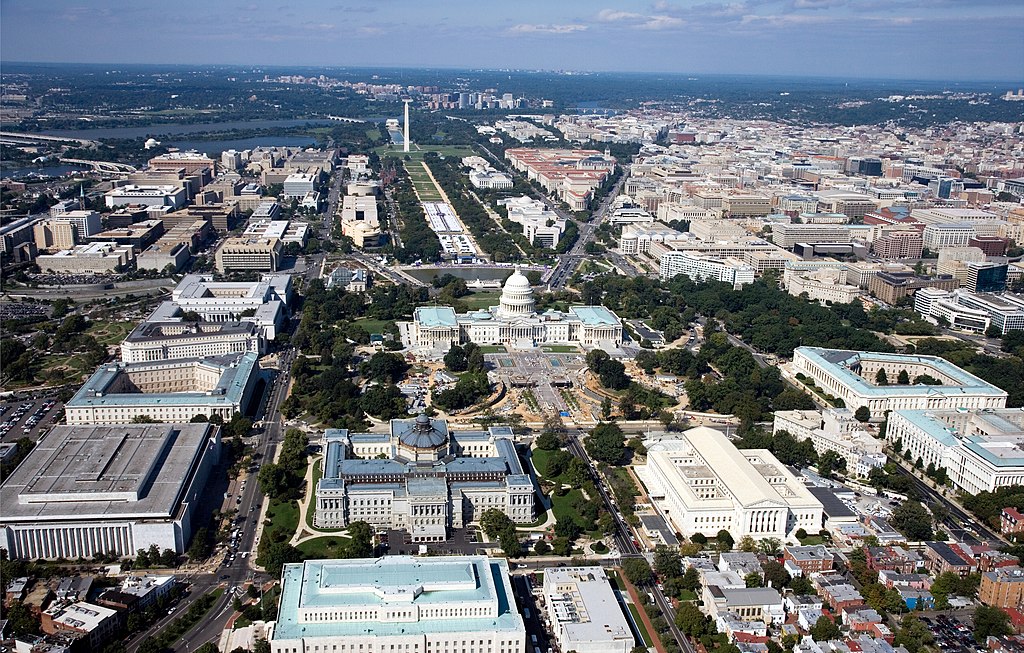 Washington, D.C., is the political capital of the United States, with all three branches of the U.S. federal government are centered in the District.

The three branches include Congress, the legislative branch, the President, the executive branch, and the U.S. Supreme Court, the judicial branch.

Washington is also home to many national monuments and museums, primarily situated on or around the National Mall.

With over 80 Museums, Art Galleries, and Historic Houses, the most famous museums in Washington, D.C. include the following.

Highlights of the Best Museums in Washington DC

The National Gallery of Art and its attached Sculpture Garden is the national art museum in Washington, D.C., located on the National Mall.

The museum was originally privately established in 1937 for the American people by a joint resolution of the United States Congress.

Andrew W. Mellon donated a substantial art collection and funds for construction. The Gallery’s collection of paintings, drawings, prints, photographs, sculptures, medals, and decorative arts traces the development of Western Art from the Middle Ages to the present.

The National Museum of American History collects the heritage of the United States in the areas of social, political, cultural, scientific, and military history.

The museum is part of the Smithsonian Institution and located on the National Mall.

The National Air and Space Museum displays the most extensive collection of historic aircraft and spacecraft in the world. It was established in 1946 and opened its main building in 1976.

The museum contains historical objects such as the Apollo 11 module, the Friendship 7 capsule, the Bell X-1, which broke the sound barrier, and the Wright brothers’ plane.

The museum was established in 2003, and it opened in 2016, in a ceremony led by U.S. President Barack Obama.

The museum has separate 12 exhibition areas with multiple interactive activities and videos across five floors.

The National Museum of Natural History is a natural history museum administered by the Smithsonian Institution.

The museum was one of the first Smithsonian buildings explicitly constructed to hold the national collections and research facilities.

The National Portrait Gallery is part of the Smithsonian Institution, and its collection focuses on images of famous Americans.

The museum is housed in the Old Patent Office Building, as is the Smithsonian American Art Museum.

The Smithsonian American Art Museum is part of the Smithsonian Institution. It holds one of the largest collections of art, from the American colonial period to the present.

The museum has more than 7,000 artists represented in the collection. The museum’s main building is the old Patent Office Building, which it shares with the National Portrait Gallery. Craft-focused exhibitions are shown in the Renwick Gallery.

The Hirshhorn Museum and Sculpture Garden is a museum of contemporary and modern art and currently focuses its collection-building and exhibition-planning mainly on the post–World War II.

The International Spy Museum is dedicated to the tradecraft, history, and contemporary role of espionage.

The Museum features a collection of international espionage artifacts and displays on the history of spying.

National Museum of Women in the Arts

The National Museum of Women in the Arts is dedicated to celebrating women’s achievements in the visual, performing, and literary arts. The museum’s collection includes over 4,500 paintings, sculptures, works on paper, and decorative art.

Highlights of the collection include works by Mary Cassatt, Frida Kahlo, and Élisabeth Louise Vigée-Le Brun.

The United States Holocaust Memorial Museum is adjacent to the National Mall in Washington, D.C., and focuses on the documentation, study, and interpretation of Holocaust history.

The museum’s collections contain more than 12,750 artifacts, 49 million pages of archival documents, 85,000 historical photographs, a list of over 200,000 registered survivors and their families, 1,000 hours of archival footage, 93,000 library items, and 9,000 oral history testimonies.

The Freer contains art from East Asia, South Asia, Southeast Asia, the Islamic world, the ancient Near East, and ancient Egypt, as well as a significant collection of American art.

The museum was founded in 1982 and is located on the south side of the National Mall, the majority of the museum is located underground below the Enid A. Haupt Garden.

The National Museum of the United States Navy is located in the old Naval Gun Factory on the grounds of the Washington Navy Yard in Washington, D.C. The museum collects, preserves, and displays naval artifacts and artwork.

The U.S. Navy Museum was established in 1961 as one of 15 Navy museums throughout the country. As a National Museum, it is the only one that presents an overview of U. S. naval history. This museum was amongst America’s earliest federal museums.

Exhibitions commemorate the Navy’s wartime heroes and battles as well as its peacetime contributions in exploration, space flight, navigation, and humanitarian service.

National Museum of the American Indian

The museum has three facilities:

The foundations for the collections were first assembled in the former Museum of the American Indian in New York City, which was established in 1916. It became part of the Smithsonian in 1989.

The National Postal Museum houses the National Philatelic Collection. Also, it hosts many artifacts and displays about the history of the United States Postal Service and of mail services around the world.

The museum is located across the street from Union Station in the building that once served as the main post office of Washington, D.C., from 1914 to 1986.

The United States Postal Service is an independent agency of the executive branch of the federal government responsible for providing postal service in the United States.

It is one of the few government agencies explicitly authorized by the United States Constitution.

The Service traces its roots to 1775 when Benjamin Franklin was appointed the first postmaster general. The Post Office Department was created in 1792 with the passage of the Postal Service Act.

The National Museum of African Art has a collection that includes 9,000 works of traditional and contemporary African art from Sub-Saharan and Arab North Africa.

The institution was first founded in 1964, with a collection focused on traditional African art. It joined the Smithsonian Institution in 1979 and became the National Museum of African Art two years later.

As the Smithsonian Institution’s African art museum, it was the first institution dedicated to African art in the United States.

Today the collection is exhibited in a mostly underground museum building that was completed in 1987, just off the National Mall and adjacent to other Smithsonian museums.

The National Building Museum is a museum of architecture, design, engineering, construction, and urban planning. The museum was created by an act of Congress in 1980 and hosts various exhibits in galleries around the Great Hall.

The building that houses the museum was completed in 1887 for the United States Pension Bureau. It is an early example of Renaissance Revival architecture.

The building’s architect departed from the established Greco-Roman models that were the basis of most government buildings in Washington, D.C. The design was based on Italian Renaissance precedents, notably Rome’s Palazzo Farnese and the Palazzo della Cancelleria.

The building was used for federal government offices until the 1960s, and later the building has formally renamed the National Building Museum in 1997.

The National Zoological Park is one of the oldest zoos in the United States and is part of the Smithsonian Institution. The Zoo host about 2,700 animals of 390 different species, of which about one-fifth are endangered or threatened.

The National Zoo has two campuses. The first is a 163-acre (66 ha) urban park located in Northwest Washington, D.C. The other campus is the 3,200-acre (1,300 ha) Smithsonian Conservation Biology Institute in Virginia.

The Zoo’s mission is to:  “provide engaging experiences with animals and create and share knowledge to save wildlife and habitats.”

The Zoo first started as the National Museum’s Department of Living Animals in 1886, and the National Zoo was created in 1889. In 1890, it became a part of the Smithsonian Institution.

The National Law Enforcement Museum covers the history and structure of American law enforcement with exhibits, historical and contemporary artifacts.

The Museum is an underground facility located adjacent to the National Law Enforcement Officers Memorial in Washington, DC’s Judiciary Square.

The Museum’s exhibitions include permanent galleries and one changing exhibition gallery.

The Museum tells the story of law enforcement in the United States. Tales of the fallen are featured in the Museum’s “Hall of Remembrance.”

“Washington is a very easy city for you to forget where you came from and why you got there in the first place.”
– Harry S. Truman

“You want a friend in Washington? Get a dog.”
– Harry S Truman

“I go to assume a task more difficult than that which devolved upon Washington. Unless the great God, who assisted him, shall be with me and aid me, I must fail; but if the same omniscient mind and almighty arm that directed and protected him shall guide and support me, I shall not fail – I shall succeed.”
– Abraham Lincoln

“I’ll be long gone before some smart person ever figures out what happened inside this Oval Office.”
– George W. Bush

“The mystery of government is not how Washington works but how to make it stop. ”
– P. J. O’Rourke

“The constant drive for campaign dollars has distorted decision-making in Washington, DC, to the point where our systems can no longer effectively address complex, long-term problems like the climate crisis.”
– Al Gore

“The need for reflection and restraint of power is what led Louis Freeh to order that all new agent classes visit the Holocaust Museum here in Washington so they could see and feel and hear in a palpable way the consequences of abuse of power on a massive, almost unimaginable scale.”
– James Comey

“Where the criminals cover their crimes by making them legal.”
– Frank Dane

“America’s middle class is getting hammered, and Washington is rigged to work for the big guy.”
– Elizabeth Warren

“When it comes to Washington, most people tend to think first of politics. But Washington is also a geographic and physical place. It is, for instance, one of the few cities in the world where you can talk endlessly about trees.”
– Katharine Graham

“When they go low, we go high.”
– Michelle Obama

“I think a lot of Americans are not sure which side Washington is on: the side of banks or the side of the people.”
– Elizabeth Warren

“Washington and Congress are steeped in history and tradition, and that’s been very male-oriented.”
– Nancy Pelosi

“I date the end of the old republic and the birth of the empire to the invention, in the late thirties, of air conditioning. Before air conditioning, Washington was deserted from mid-June to September. … But after air conditioning and the Second World War arrived, more or less at the same time, Congress sits and sits while the presidents — or at least their staffs — never stop making mischief.”
– Gore Vidal

“It is sometimes called the City of Magnificent Distances, but it might with greater propriety be termed the City of Magnificent Intentions. … Spacious avenues, that begin in nothing, and lead nowhere; streets, mile-long, that only want houses, roads, and inhabitants; public buildings that need but a public to be complete; and ornaments of great thoroughfares, which only lack great thoroughfares to ornament — are its leading features.”
– Charles Dickens

Map for Museums in Washington D.C.

8 Tips for the Smithsonian and FREE museums in DC

“Nearly all men can stand adversity, but if you want to test a man’s character, give him power.”
– Abraham Lincoln