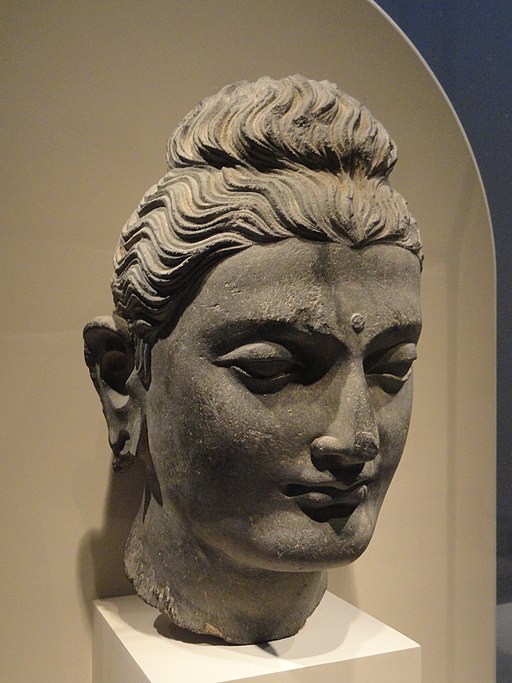 Head of a Buddha, Gandharan Style

This Head of a Buddha, in the Gandharan style, depicts the  Buddha with a small mouth, slender nose, and wavy locks of hair. This idealized image bears all the Classical features of the Greek influences on Gandharan sculptures.

The figure’s “Ushnisha,” which is the three-dimensional oval at the top of the head of the Buddha, resembles a topknot of hair.

The first representations of the Buddha in the 1st century CE in the Greco-Buddhist art of Gandhara represent the Buddha with a topknot, rather than just a cranial knob.

It is thought that the interpretation of the “ushnisha” as a supernatural cranial protuberance happened at a later date, as the representation of the topknot became more symbolic and its original meaning was lost.

In the northwestern region of ancient Gandhara which covered parts of present-day India, Pakistan, and Afghanistan, artisans working in gray schist or white stucco took their inspirations from Greek sculpture.

Gandharan sculptors created figures with Classical facial features, thick curly locks, and heavy drapery. Gandhara was ruled by a series of Indo-Greek kings from the fourth century BC.

These Greco-Bactrian kingdoms served as an important artistic gateway between India and the West.

The “Ushnisha” is one of the major marks of the Buddha. The cranial protuberance at the top of his head, which is covered with hairs that curl in the direction of the sun.

It is the most important iconographic attribute of a Buddha and represents a physical manifestation of the Buddha’s expanded wisdom gained at the time of his enlightenment.

In later periods on the second definition of Ushnisha was added, which was a flame that ascends from the middle of this protuberance.

The Ushnisha is an important feature of any Buddha statues and images, but there is no actual evidence of whether Buddha had the top knot over his head. The Buddha in ancient books refers to the Buddha having had a shaven head.

In one ancient text, there is the story of a hunter who while out on a hunt encounters Gautama Buddha. The hunter gave up hunting for the day, after seeing the shaven man in the middle of the jungle, considering it to be a bad omen.

Gautama Buddha (c. 563/480 – c. 483/400 BCE), also known as Siddhārtha Gautama or simply the Buddha, was a monk, mendicant, sage, philosopher, and teacher on whose teachings Buddhism was founded.

He lived and taught mostly in the northeastern part of ancient India sometime between the 6th and 4th centuries BCE.

Buddha taught a Middle Way between sensual indulgence and the severe asceticism, and he is the primary figure in Buddhism.

He is believed by Buddhists to be an enlightened teacher who attained full Buddhahood and shared his insights to help sentient beings end rebirth and suffering.

Accounts of his life, discourses, and monastic rules are believed by Buddhists to have been summarised after his death and memorized by his followers.

Various collections of teachings attributed to him were passed down by oral tradition and first committed to writing about 400 years later.

Head of a Buddha, Gandharan style

“Even as a solid rock is unshaken by the wind, so are the wise unshaken by praise or blame.”

“It is better to travel well than to arrive.”
– Buddha