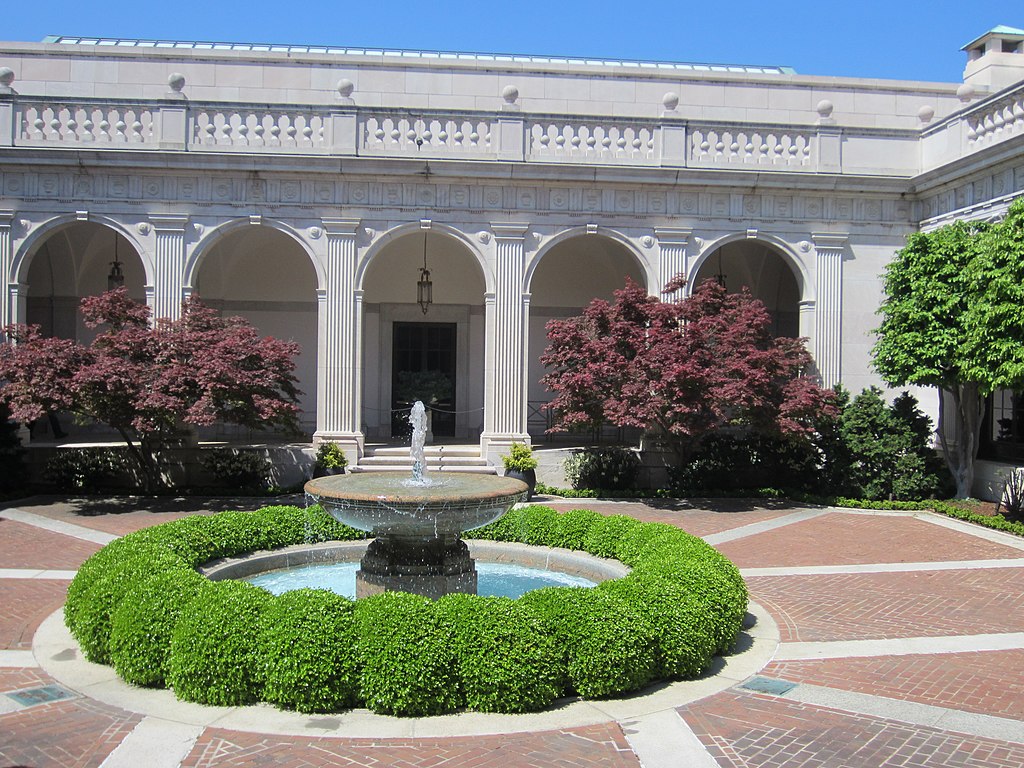 The Freer contains art from East Asia, South Asia, Southeast Asia, the Islamic world, the ancient Near East, and ancient Egypt, as well as a significant collection of American art.

The Freer Gallery of Art has a collection of over 26,000 objects spanning 6,000 years of history.

In addition to Asian art, the Freer also contains many of James McNeill Whistler works as part of the Freer’s American art collection.

The gallery is located on the south side of the National Mall in Washington, D.C., contiguous with the Sackler Gallery.

Virtual Tour of the Freer Gallery of Art

Highlights Tour of the Freer Gallery of Art

Southend Pier by James Abbott McNeill Whistler depicts groups of people walking at the water’s edge. Southend Pier, a major landmark in Southend-on-Sea, in southeastern Essex, England, is in the background.

In the early 19th century, Southend was growing as a seaside holiday resort. The coast at Southend consists of extensive mudflats, so the sea is never deep even at full tide.

By the 1850s, the railway had reached Southend with it a significant influx of visitors from London. After this painting was made, it was decided to replace the pier with a new iron pier.

“Green and Silver: Beaulieu, Touraine” by James Abbott McNeill Whistler depicts a green meadow, with a house and trees in the distance.

A child with red pants stands in the foreground, with another figure beyond in the background.

Variations in Pink and Grey: Chelsea by James Abbott McNeill Whistler depicts the affluent area of South West London bounded to the south by the River Thames.

In the 19th century, the area became a Victorian artists’ colony. Chelsea once had a reputation as London’s bohemian quarter, the haunt of artists, radicals, painters, and poets.

There was an unusually large concentration of artists in the area around Cheyne Walk and Cheyne Row, where the Pre-Raphaelite movement had its heart.

The Peacock Room is a decorative art masterpiece created by James McNeill Whistler and Thomas Jeckyll. It was completed in 1877 and is one of the great surviving aesthetic interiors of the Anglo-Japanese style.

Whistler painted the paneled room in brilliant blue-greens with over-glazing and metallic gold leaf. Thomas Jeckyll was the architect and initial designer of the room.

The Peacock Room was originally designed as a dining room for a townhouse in Kensington in London, owned by the British shipping magnate Frederick Richards Leyland.

Leyland engaged the leading British architectural firm, of the time, to remodel and redecorate his home. The architectural firm turned to Thomas Jeckyll, who was experienced in the Anglo-Japanese style, for the remodeling of the dining room.

The Princess from the Land of Porcelain

“Rose and Silver: The Princess from the Land of Porcelain” by James Abbott McNeill Whistler depicts a Western woman wearing a kimono and standing amidst numerous Asian objects, including a rug and screen, as well as some porcelain.

The woman holds a hand fan, and her pose echos the elongated Asian female figures depicted in ancient Asian artworks.

“The Princess” is one of several of Whistler’s works painted during the 1860s that depict a Western woman with Asian motifs and Asian clothes.

Princess was painted between 1863 and 1865 with Christine Spartali, the sister of Pre-Raphaelite artist Marie Spartali Stillman, serving as the model. Spartali has been described as an Anglo-Greek beauty “whom all the artists of the day were clamoring to paint.”

Whistler’s large signature on the top left of the canvas drew critical comments. Also, the prominent signature led to potential buyers to withdraw from purchasing the artwork because of the signature’s prominence.

This criticism of Whistler’s prominent signature prompted Whistler to develop his more subtle butterfly-style signature in his future artworks.

“The Smithsonian Institute is one of the most popular agencies of government in the United States.”
– Norm Dicks