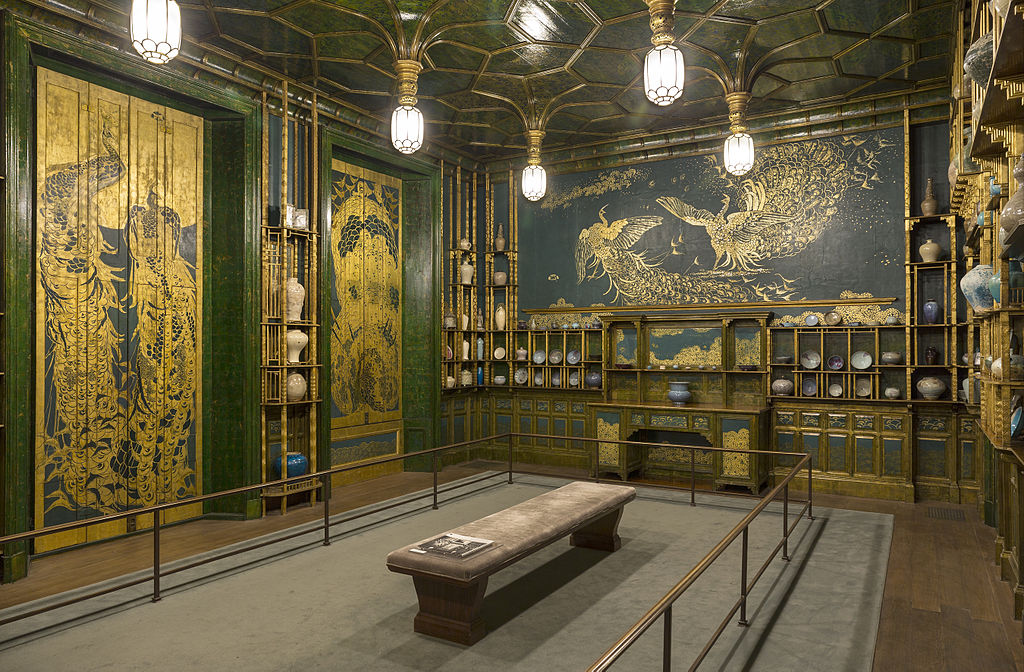 The Peacock Room is a decorative art masterpiece created by James McNeill Whistler and Thomas Jeckyll. It was completed in 1877 and is one of the great surviving aesthetic interiors of the Anglo-Japanese style.

Whistler painted the paneled room in brilliant blue-greens with over-glazing and metallic gold leaf. Thomas Jeckyll was the architect and initial designer of the room.

The Peacock Room was originally designed as a dining room for a townhouse in Kensington in London, owned by the British shipping magnate Frederick Richards Leyland.

Leyland engaged the leading British architectural firm, of the time, to remodel and redecorate his home. The architectural firm turned to Thomas Jeckyll, who was experienced in the Anglo-Japanese style, for the remodeling of the dining room.

The fireplace wall was designed to feature a painting by James McNeill Whistler. The painting had been previously purchased by Leyland to display in his dining room with his Chinese ceramics.

Whistler’s painting was titled: “Rose and Silver: The Princess from the Land of Porcelain.” This painting served as the focal point of the room.

The ceiling was constructed in a pendant paneled Tudor-style and decorated with eight globed pendant gas light fixtures. To finish the room, Jeckyll placed a rug with a red border on the floor. 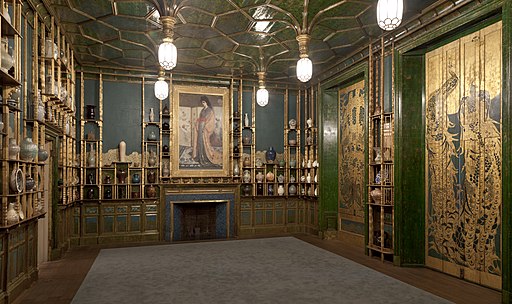 The Battle of the Peacocks

Jeckyll had nearly completed his decorative scheme; however, illness compelled him to pass the project to another for completion.

Whistler, who was then working on decorations for the entrance hall of Leyland’s house, volunteered to finish Jekyll’s work in the dining room.

Whistler suggested minor changes to which Leyland agreed. Jeckyll also authorized some further embellishments to his design before returning to his home in Liverpool to recuperate.

Leyland, the owner of the house, had to travel, and during his absence, Whistler grew bolder with his revisions.

When Leyland returned from his long trip to examine the progress, he was shocked by the “improvements.”

Whistler and Leyland quarreled fiercely over the room. They also disagreed about and Whistler’s compensation, to the extent that Whistler was dismissed from the project.

During this challenging period, Whistler gained access to Leyland’s home and painted two fighting peacocks meant to represent the artist and his patron, which he titled “Art and Money.”

Whistler is reported to have said to Leyland:

“I have made you famous.
My work will live when you are forgotten.
Still, perchance, in the dim ages to come,
you will be remembered as the proprietor of the Peacock Room.”

In 1879, Whistler was forced to file for bankruptcy, with Leyland as his chief creditor. Whistler referenced the incident in his book, “The Gentle Art of Making Enemies.”

Adding to the drama, Whistler was fond of Leyland’s wife, Frances, who separated from her husband during this period of tension.

When Jeckyll, the original architect, saw the room, he was so shocked, that he was later found on the floor of his studio covered in gold leaf; he never recovered and died insane three years later.

Art collector Charles Lang Freer acquired “The Princess from the Land of Porcelain” painting and anonymously purchased the entire room in 1904 from Leyland’s heirs.

Harmony in Blue and Gold: The Peacock Room

Thomas Jeckyll (1827 – 1881) was an architect who excelled in the creation of metalwork and furniture. He was strongly influenced by Japanese design and is best known for his planning for the “Peacock Room.”

He was a noted designer of  interiors but Jeckyll’s behavior had become erratic, and in his absence, Whistler took over the decorating of the “Peacock Room.”

His early death at fifty-four was brought about by a mental breakdown and severe depression.

“I have made you famous.
My work will live when you are forgotten.”
– James Abbott McNeill Whistler