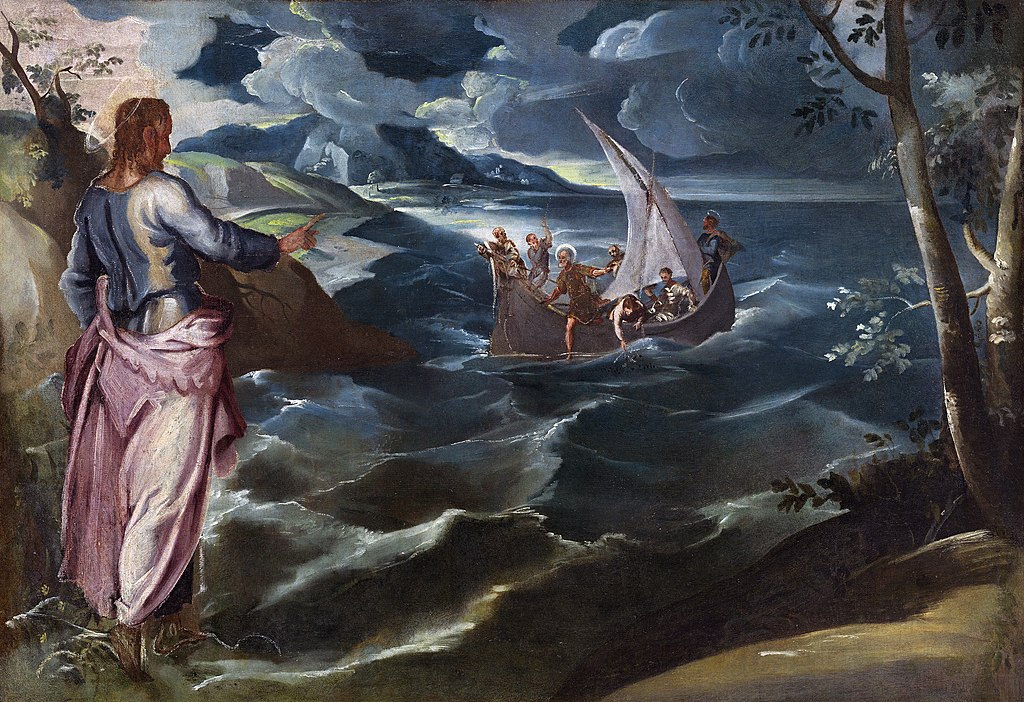 “Christ at the Sea of Galilee” by Circle of Tintoretto

“Christ at the Sea of Galilee” by Lambert Sustris or a member of the Circle of Tintoretto, depicts Jesus Christ as he raises a hand toward the apostles, who are in a boat on massive waves and beneath stormy skies.

Christ is depicted backlit by the rising sun on the shore of Lake Galilee as he appears to the seven men in a boat.

This painting tells the story in the Gospels of John when the apostles had been fishing all night without success.

Christ told them to cast their nets to the right side of the boat, where the catch would be plentiful. When Peter saw Christ, he jumped into the water to swim to shore.

As the sunrise begins to brighten the waves and sky, Peter extends his leg from the boat.

Many of the events in the life of Jesus Christ took place in the region of Galilee and areas surrounding the Sea of Galilee.

This painting is an example of mannerism, an art style that exaggerates proportion and favors compositional tension.

This can be seen in the expressive postures of the figures and the intense color of the sea and sky.

The scene is made to look overly dramatic rather than realistic. The artist used extreme highlights, intensifying the darkness and light that comes from a directed light source.

Earlier in art history, some critics assumed that this painting was the work of El Greco.

Then the painting was attributed to Tintoretto based on stylistic elements such as the dramatic treatment of light and the dry white brushwork that highlights the rolling waves.

However, the painting’s lack of thick buildup of paint on the surface and differences in figural types and coloring cast uncertainty on the attribution to Tintoretto.

Current research points to Lambert Sustris as the artist, he was one of Tintoretto’s students and in the circle influenced by Tintoretto.

Although the attribution cannot be confirmed with certainty, this work was created by one of the Circles of Tintoretto’s students. The attribution of this picture to Sustris is based upon strong similarities in other works by Sustris.

Also, two unfinished paintings have been revealed to lie beneath its surface, which also appears consistent with the artist’s work.

Lambert Sustris (1520 – 1584) was a Dutch painter active mainly in Venice. The works Sustris completed in Italy exhibit a Mannerist style.

He came to Venice when over 40 years old and worked in the studio of Titian for the depiction of landscapes. He accompanied Titian on his trips to Augsburg where he executed portraits.

Returning to Venice, he taught several students who became an essential means by which the Venetian interest in landscape and its role as a backdrop for historical subjects spread to Rome in the mid-to-late sixteenth century.

Mannerism is a style in European art that emerged in the later years of the Italian High Renaissance around 1520 and lasting until the end of the 16th century in Italy when the Baroque style replaced it.

The style is notable for its sophistication as well as its artificial as opposed to naturalistic qualities. This artistic style promotes compositional tension rather than the balance and clarity of earlier Renaissance painting.

Weather in Art: From Symbol to Science

“Come down, O Christ, and help me! reach thy hand, for I am drowning in a stormier sea than Simon on thy lake of Galilee.”
– Oscar Wilde