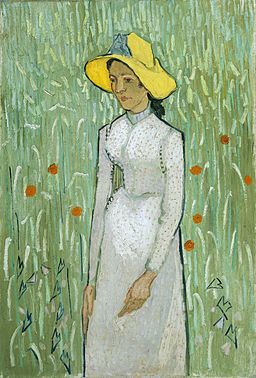 “Girl in White” by Vincent van Gogh depicts a young woman wearing a large yellow hat with a knot of sky-blue ribbons standing against a background of a green wheat field.

Vincent van Gogh created this painting in 1890 in Auvers-Sur-Oise, France, during the last months of his life.

Van Gogh has used the picture’s elongated plane to dramatic effect by having the woman fill most of the pictorial space, making her appear closer to the viewer.

Van Gogh shadowed her face and gave her a distant gaze, which endows her with a touching emotional distance.

In letters, Van Gogh admitted that he could only portray sadness and endless loneliness. This painting is one of Van Gogh’s soulful and beautiful paintings.

While in Auvers-Sur-Oise, from May until his death on July 29, Van Gogh made about 70 paintings, more than one painting a day, and many drawings.

Van Gogh painted the buildings and people around the town of Auvers, and the nearby fields.

Van Gogh made a second painting of the same woman with the same hat called “Young Peasant Woman with Straw Hat Sitting in the Wheat.”

In May 1890, Van Gogh traveled to Auvers-Sur-Oise with a letter of introduction for Dr. Paul Gachet, a homeopathic physician and art patron who lived in Auvers.

Van Gogh took a room at the inn Auberge Ravoux in Auvers and came under the care and supervision of Dr. Gachet with whom he grew to have a close relationship.

However, Vincent felt that Gachet had his own neurosis, which caused Van Gogh to question:

“Now, when one blind man leads another blind man, don’t they both end up in the ditch?”

For a time, Van Gogh seemed to improve. He began to paint at a steady pace, and there was barely space in his room for all the finished paintings.

However, after visiting Paris for a family conference, Vincent learned about the Illness that had struck his brother Theo’s baby, who was called Vincent. Also, he saw that Theo had both health and employment concerns.

Van Gogh returned to Auvers bleaker than before. In a letter he wrote:

“And the prospect grows darker; I see no future at all.”

After Van Gogh’s suicide, Gachet came in for criticism due to the lack of improvement for Vincent following his ten weeks of consultation. However, Van Gogh was a challenging patient who was unable to follow his doctors’ advice to cut back on alcohol.

Also, at the time, there was little available to physicians to help treat Vincent’s illness.

“The more I think about it, the more I realize there is nothing more artistic than to love others.”
– Vincent van Gogh