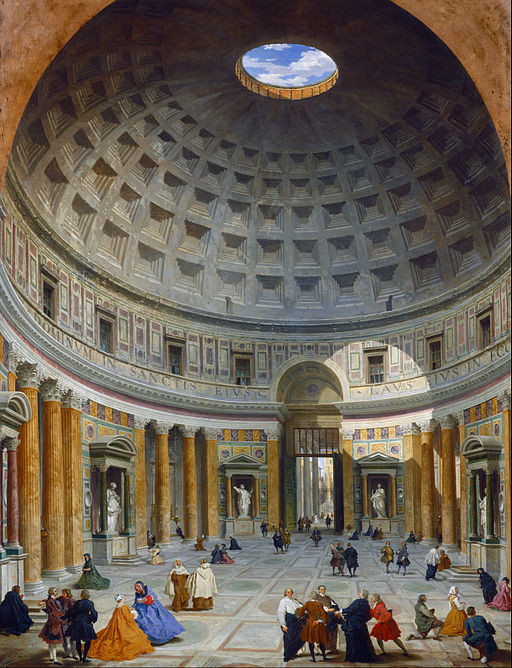 “Interior of the Pantheon, Rome” by Giovanni Paolo Panini

Panini populated the scene with foreign visitors. He featured a diverse mix of Romans and visitors from all parts of society. They congregate in the Pantheon to pray and to admire the fantastic architecture.

Panini exaggerated the perspective to provide a broader view of the interior than is possible from any single vantage point. The viewpoint is deep within the building, facing the entrance.

The portals open to the colossal columns of the porch. The painting shows a glimpse of the obelisk in the piazza before the church.

Through the central opening, called the Oculus, to the sky in the center of the dome, Panini revealed the bright blue sky flecked with clouds. Panini became famous in documenting with specific skill and vibrancy the monuments and views of Rome.

The Pantheon (“temple of all the gods”) is an ancient Roman temple, now a church, in Rome. It was built on the site of an earlier temple, and it was completed by the emperor Hadrian and dedicated about 126 AD.

Hadrian chose not to inscribe the new temple but rather to retain the inscription of the older temple, which had burned down.

The building is cylindrical with a portico of large granite Corinthian columns under a pediment. A rectangular vestibule links the porch to the rotunda, which is under a coffered concrete dome, with a central opening (oculus) to the sky.

Almost two thousand years after it was built, the Pantheon’s dome is still the world’s largest unreinforced concrete dome. The height to the oculus and the diameter of the interior circle are the same, 43 meters (142 ft).

The Pantheon is one of the best-preserved of all Ancient Roman buildings because it has been in continuous use throughout its history.

Following the fall of the Roman Empire, and since the 7th century, the Pantheon has been in use as a church informally known as “Santa Maria Rotonda.” The square in front of the Pantheon is called Piazza della Rotonda.

Nevertheless, it became a standard example when classical styles were revived and have been copied many times by later architects. The form of the Pantheon can be seen in many buildings built in the 19th and 20th centuries.

It is especially prevalent in government and public buildings, city halls, universities, and libraries, echo its portico-and-dome structure. 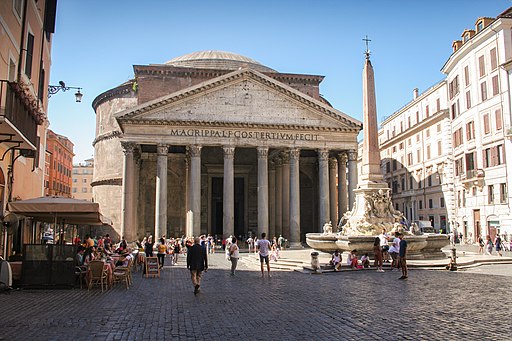 External view of the front of the Pantheon, Rome

Map for the Pantheon, Rome

The Pantheon – Under the Dome