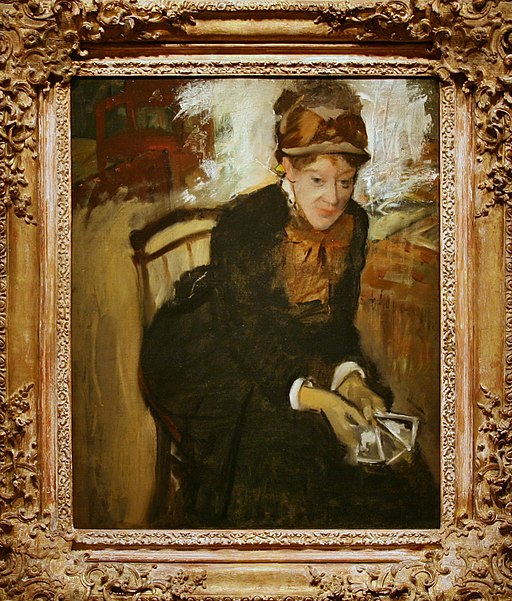 “Mary Cassatt” by Edgar Degas depicts the American impressionist artist who was a lifelong friend of Degas and served as a model for him on several occasions.

Mary Stevenson Cassatt (1844 – 1926) was an American painter who lived much of her adult life in France, where she first befriended Edgar Degas and later exhibited among the Impressionists.

Stifled by traditional art, she regarded her exposure to the work of Edgar Degas in 1874 as a turning point in her artistic life.

Despite her high regard for Degas’ work, Cassatt did not like this portrayal of her, commenting:

“It has artistic qualities but is so painful and represents me as a person so repugnant that I would not wish it to be known that I posed for it.”

Cassatt admired Degas, whose pastels had made a powerful impression on her, she later recalled. “It changed my life. I saw art then as I wanted to see it.”

She felt comfortable with the Impressionists and joined their cause enthusiastically. Unable to attend cafes with them without attracting unfavorable attention, she met with them privately and at exhibitions.

She now hoped for commercial success selling paintings to the sophisticated Parisians who preferred the avant-garde.

Her style had gained a new spontaneity, as she had adopted the practice of carrying a sketchbook with her while out-of-doors or at the theatre and recording the scenes she saw.

Cassatt and Degas had a long period of collaboration. The two had studios close together, less than a five-minute stroll apart.

They had much in common: they shared similar tastes in art and literature, came from affluent backgrounds, had studied painting in Italy, and both were independent, never marrying.

Degas introduced Cassatt to pastel and engraving, both of which Cassatt quickly mastered, while for her part Cassatt was instrumental in helping Degas sell his paintings and promoting his reputation in America.

Degas, Cassatt, and Mary’s sister, Lydia, were often to be seen at the Louvre studying artworks together.

Degas produced two prints depicting Cassatt at the Louvre looking at artworks while Lydia reads a guidebook. Cassatt frequently posed for Degas, notably for his millinery series, trying on hats.

He is regarded as one of the founders of Impressionism, although Degas rejected the term, preferring to be called a Realist. He was masterly in depicting movement, as can be seen in his many masterpieces of dancers, racecourse subjects, and female nudes.

An American in Paris: Cassatt, Degas, and the Impressionists in the 1870s

“Muses work all day long and then at night, get together and dance…”

“Art is not what you see, but what you make others see.”
– Edgar Degas