“Ginevra de’ Benci” by Leonardo da Vinci depicts a well-known young Florentine aristocrat. Leonardo painted the portrait in Florence in 1474 to commemorate Ginevra’s marriage at the age of 16.

The juniper bush that fills much of the background was regarded as a symbol of female virtue, in Renaissance Italy, while the Italian word for juniper, echo’s Ginevra’s name.

Ginevra is shown beautiful but reserved with no hint of a smile. Her gaze, although forward, seems indifferent to the viewer.

The reverse of the panel is decorated with a juniper sprig encircled by a wreath of laurel and palm and is memorialized by the phrase “beauty adorns virtue.”

This motto symbolizes Ginevra’s intellectual and moral virtue aligned with her physical beauty. The juniper, encircled by laurel and palm, suggests her name.

The laurel and palm are in the personal emblem of a Venetian ambassador to Florence, whose platonic relationship with Ginevra is revealed in poems exchanged between them.

An infrared examination has revealed the ambassador’s motto “Virtue and Honor” beneath Ginevra’s motto, making it most probable that the ambassador was somehow involved in the commission of this portrait. 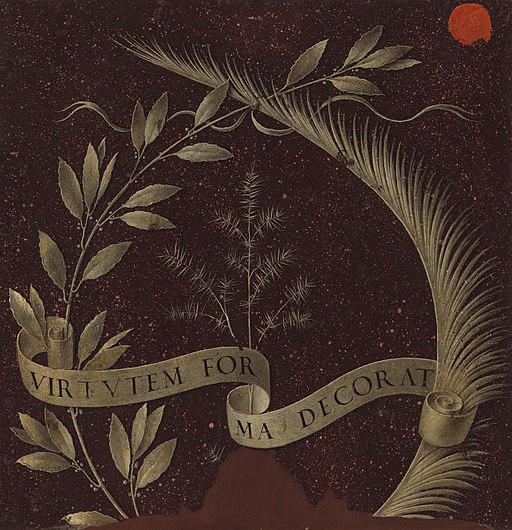 As a woman of renowned beauty, Ginevra de’ Benci was also the subject of poems written by other prominent members of Florence, including the Medici family and Lorenzo de’ Medici.

Platonic love is a type of love or a close relationship that is nonsexual. It is named after the Greek philosopher Plato, though the philosopher never used the term himself.

In the Middle Ages, there was a renewed interest in Plato, and although Plato’s discussions of love initially centered on relationships that were sexual between members of the same-sex, the meaning of platonic love transformed during the Renaissance, leading to the contemporary sense of nonsexual heterosexual love.

The English term is derived from the concept in Plato’s Symposium of the love of the idea of good which lies at the root of virtue and truth.

For a brief period, Platonic love was a fashionable subject in some royal courts of Europe, and platonic love was the theme of some of the courtly masques. However, the fashion soon came under pressures of social and political change.

Leonardo da Vinci was an Italian painter, draftsman, sculptor, architect, scientist, and engineer who was already famous in his lifetime and is today considered a genius.