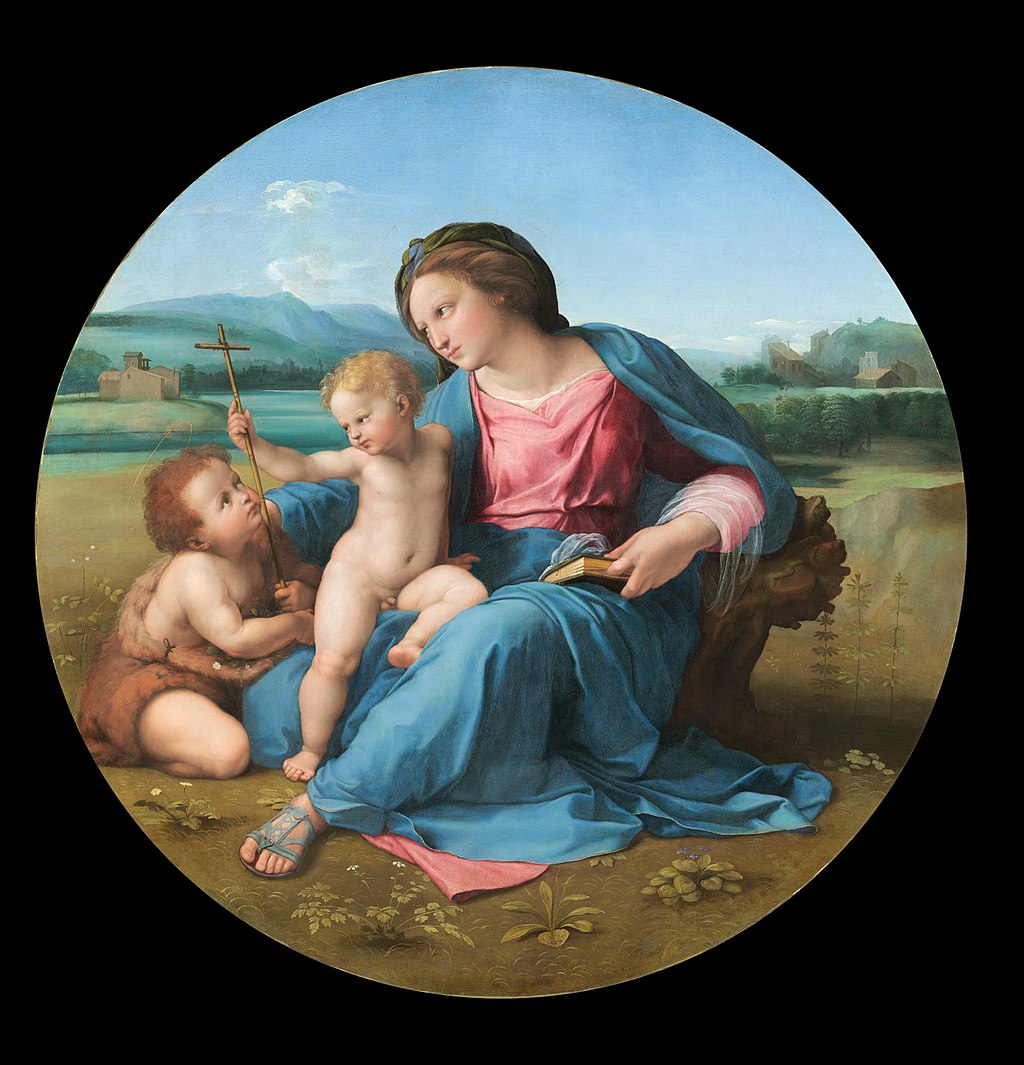 “The Alba Madonna” by Raphael

“The Alba Madonna” by Raphael depicts three figures all looking at the cross; they represent the Madonna with the Christ Child and Saint John the Baptist as a child. The figures are grouped to the left in the round composition.

The outstretched arm of the Madonna and the resting elbow on the stump with her enveloping cloak balance the group image.

The blue symbolizes the church and the red Christ’s death, with the Madonna uniting the Church with Christ’s sacrifice. In her lap, she holds Christ as he stretches out to touch the cross carried by John.

Raphael painted this painting while he was in Florence and showed a landscape backdrop that places the scene in a Tuscan setting.

Saint John the Baptist was the patron of Florence, making his presence here in a Florentine environment, which was symbolic and relevant to his audience.

Raphael’s study of what became the Alba Madonna, with other sketches

The painting is the first of a series of full-length figure compositions that portray the apocryphal encounter between the Child Jesus and the boy Baptist.

In Christian traditions, the boy Baptist is supposed to have recognized Christ as the Redeemer even in their childhood, Raphael makes this clear by letting Christ take the cross from John.

Leonardo’s influence on Raphael is evident in this composition by the arrangement of the figures into a pyramidal composition.

This pyramidal composition is something that Raphael would have studied in Leonardo’s famous drawing of “The Virgin and Child with St. Anne”, which was in another church in Florence, where Raphael studied for four years.

In the 18th century, the painting belonged to the Spanish House of Alba, whose name it bears. In 1836 it was acquired by Czar Nicholas I of Russia (1796-1855), who made it one of the highlights of the Hermitage Museum in Saint Petersburg.

After the Russian Revolution, the Soviet Government sold it in 1931 to an American industrialist, who later donated his collection to the National Gallery of Art in Washington, D.C., where it may be seen today.

Raphael was enormously productive, despite his death at 37, leaving a large body of work. Many of his works are in the Vatican Palace, where the frescoed Raphael Rooms were the central, and the largest, work of his career.

His best-known work is The School of Athens in the Vatican.

“If I create from the heart, nearly everything works: if from the head, almost nothing.”
– Marc Chagall