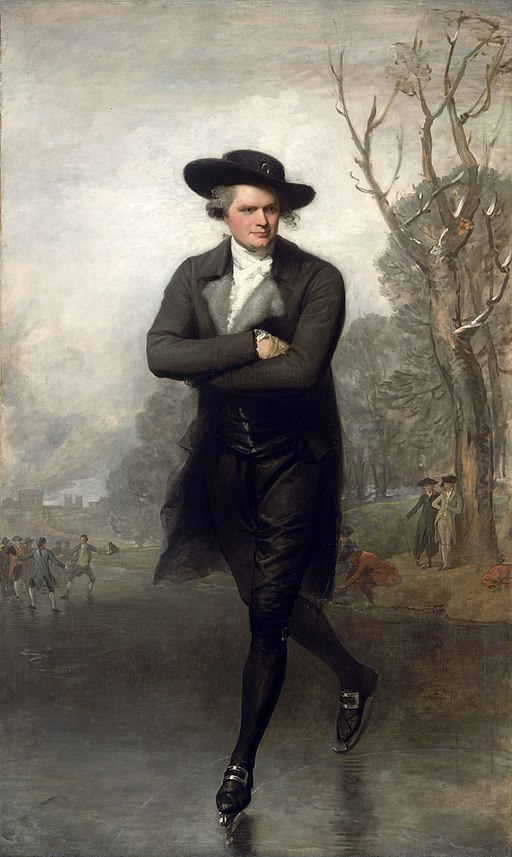 “The Skater” by Gilbert Stuart

“The Skater “by Gilbert Stuart depicts a man gliding effortlessly forward with arms crossed over his chest in typical eighteenth-century skating form.

The skater wears a dark elegant full-skirted coat, a white cravat, a gray fur lapel, tan glove, and silver buckles on the hat, breeches, and shoes. HIs stylish hat is tilted to show his face while his head is slightly lowered.

A low point of view enhances the dramatic impression. Behind the skater is a winter landscape composed of distant skaters, trees, and a far-off London skyline that includes the twoers of Westminster Abbey.

The Skater’s figure divides the canvas into halves. To the right, a large bare tree dominates the composition with a few stationary figures. While the left side, the distant skaters are depicted in motion, as are the darker winter clouds over London.

In 1775 Gilbert Stuart had left his home in the United States for London, and by 1777 he was apprenticed there to Benjamin West, another American painter in London.

By 1781, Stuart had received encouraging reception of his work by the Royal Academy, and he was approached by William Grant, a well-placed young Scotsman, who wished to commission a full-length portrait.

On his first sitting for the portrait, Grant remarked that

“on account of the excessive coldness of the weather … the day was better suited for skating than sitting for one’s portrait.”

Soon Stuart and his patron left for the Serpentine in Hyde Park, where the two men started skating. Grant engaged in a series of skating maneuvers that attracted an admiring crowd.

Upon their return to the studio, Stuart suggested a composition inspired by their venture on the ice.

Stuart conceived the idea of portraying his subject on ice skates in a winter landscape, with the towers of Westminster Abbey far in the distance. Grant consented, and Stuart subsequently painted his first full-length format portrait.

At the Royal Academy exhibition of 1782, the painting was immediately recognized for its originality. The image of skating and vigorous movement had no precedent in Britain’s tradition of life-size society portraiture.

Stuart’s five-year apprenticeship with West ended with this success, and he moved his studio from a room in West’s house to an independent studio space.

Stuart later said that he had been

“suddenly lifted into fame by a single picture.”

The Skater may have influenced a later painting, “The Skating Minister,” considered a Scottish art masterpiece.

“The Skater “by Gilbert Stuart