The National Museum of African American History and Culture is a Smithsonian Institution Museum on the National Mall in Washington, D.C.

It has over 35,000 objects in its collection related to African American History and Culture and is open to the public free of charge.

The museum was established in 2003, and it opened in 2016, in a ceremony led by U.S. President Barack Obama.

The museum has separate 12 exhibition areas with multiple interactive activities and videos across five floors.

These Manillas were a form of money, made of bronze or copper, which were used in West Africa. Manillas became the principal money of the slave trade and were used as trade goods in the Atlantic slave trade.

The trade involved taking manillas and other brass objects such as pans and basins to West Africa, to buy slaves for delivery to America and then returning to Europe with cotton for the mills of Europe.

The price of a slave, expressed in manillas, varied according to place, and the specific type of manilla offered.

Manillas were produced in large numbers in a range of designs, sizes, and weights. Originating before the colonial period, as the result of trade with the early Portuguese Empire.

Manillas during the slave-trading period became the general-purpose currency in West Africa, being used for everyday commercial transactions, payment of fines, and compensation.

Manillas were often hung over a grave to show the wealth of the deceased.

As the slave trade was eliminated in the 19th century, manilla production declined and became unprofitable. Many manillas were melted down by African craftsmen to produce artworks.

Manillas continued to serve as money and decorative objects until the late 1940s. 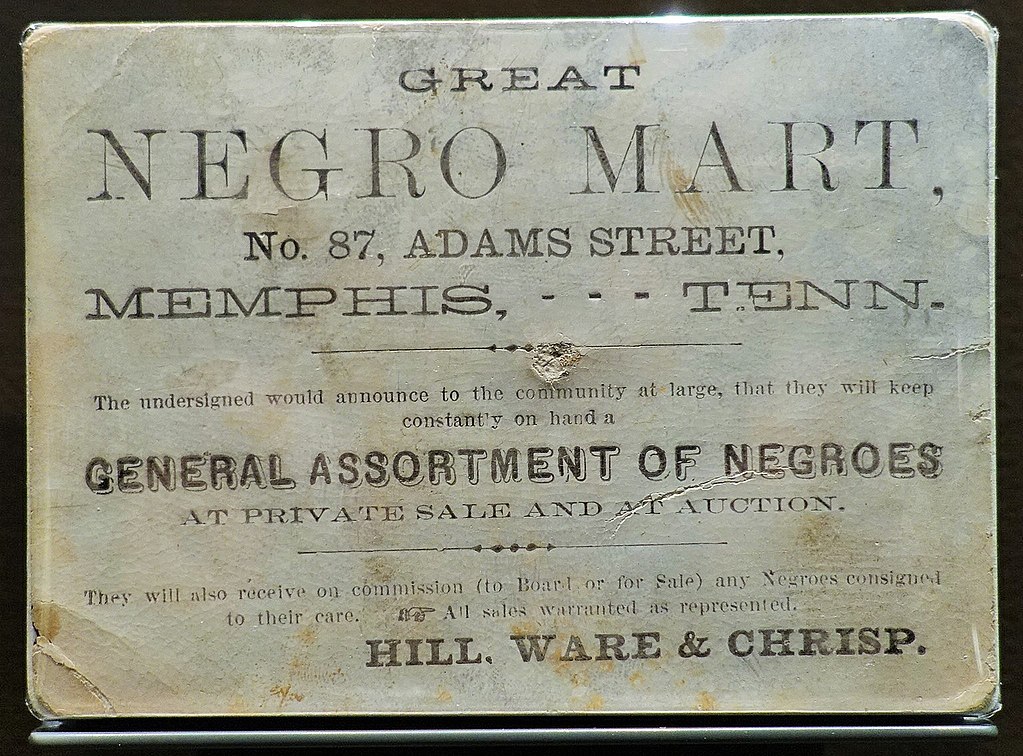 This object is a card for the “Great Negro Mart,” used by Byrd Hill as his calling card. Byrd Hill owned and operated a large slave yard where a “general assortment of negroes” was available for purchase.

The slave trade made significant profits for slave dealers, sales patrols, auctioneers, law officials, and others who contributed to the trafficking in humans.

Although slavery is no longer legal anywhere in the world, human trafficking remains an international problem to this day and an estimated that tens of million people are enslaved today.

The Code Noir (French: Black Code) was a decree passed by France’s King Louis XIV in 1685, that defined the conditions of slavery in the French colonial empire.

The code detailed the “acceptable” conditions for enslavement. It legitimized slave ownership and, at the same time, allowed slaves certain rights.

The Code Noir also restricted the activities of free Negroes, forbade the exercise of any religion other than Roman Catholicism, and ordered all Jews out of France’s colonies.

The Code Noir has 60 articles, below is a sample of some the articles:

The Code Noir resulted in a far higher percentage of blacks being free people of color compared to non-French colonies.

They were, on average, more literate, with a significant number of them owning businesses, properties, and even slaves.

Visiting the National Museum of African American History and Culture

First African American history museum in the US

The National Museum of African American History and Culture

“Character is like a tree and reputation like a shadow. The shadow is what we think of it; the tree is the real thing.”
– Abraham Lincoln