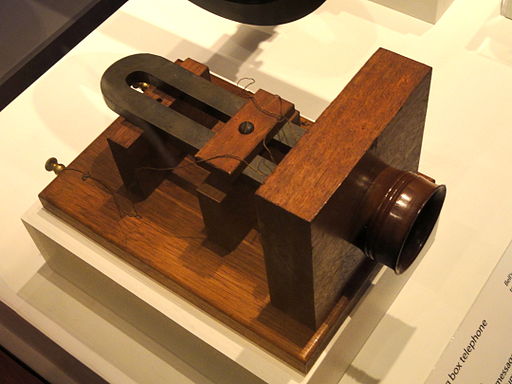 Bell’s first telephone included an iron diaphragm, two electromagnets, and a horseshoe permanent magnet pressed against the electromagnets. Both transmitter and receiver were similar.

When used as a transmitter, sound waves at the mouthpiece cause the diaphragm to move, creating a fluctuating current in the electromagnets.

This current was conducted over wires to a similar instrument, acting as a receiver. At the receiver, fluctuating current in the electromagnets causes the diaphragm to move, producing vibrations that can be heard.

By 1874, Alexander Graham Bell thought it might be possible to generate electrical currents that corresponded to sound waves. He thought that multiple metal reeds tuned to different frequencies would convert the undulating currents back into sound. But he had no working model to demonstrate the feasibility of these ideas.

However, a chance meeting that year between Bell and Thomas A. Watson, an experienced electrical designer and mechanic, changed all that.

Bell hired Thomas Watson as his assistant, and the two of them experimented with acoustic telegraphy. In 1875, Watson accidentally plucked one of the reeds, and Bell heard the reed’s overtones at the receiving end of the wire.

That accident demonstrated to Bell that only one reed or armature was necessary, not multiple reeds. What followed was a race to the patent office as other inventors were also experimenting with acoustic telegraphy.

There is much debate by historians about various other people’s contributions to the inventor of the telephone, but over 100 years later, Alexander Graham Bell is recognized as the inventor. There are also accusations of bias in the Patent Office.

Over a period of 18 years, the Bell Telephone Company faced 587 court challenges to its patents, including five that went to the U.S. Supreme Court. 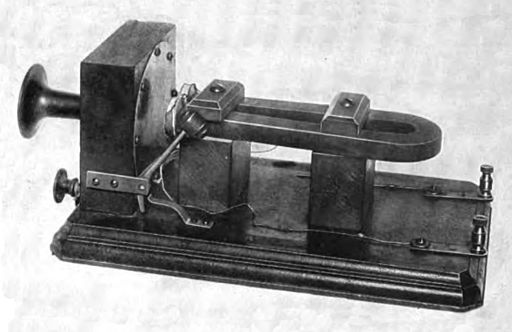 Box telephone, 1877 – used interchangeably as a transmitter and receiver

None was successful, and the Bell Telephone Company never lost a case that had proceeded to a final trial stage. Bell’s laboratory notes and family letters were the keys to establishing a long lineage to his experiments.

The first commercial telephone services were set up in 1878 and 1879 on both sides of the Atlantic in New Haven and London. Alexander Graham Bell held the master patent for the telephone needed for such services in both countries.

The technology grew quickly from this point, with inter-city lines being built and telephone exchanges in every major city of the United States by the mid-1880s.

Despite this, transatlantic voice communication remained impossible until 1927, when a connection was established using radio. However, no cross-Atlantic cable connection existed until  1956, providing 36 telephone circuits.

Their invention’s scientific principles would not be utilized for several decades when they were first deployed in military and fiber-optic communications.

Alexander Graham Bell (1847 – 1922)[3] was a Scottish-born inventor, scientist, and engineer who invented and patented the first practical telephone. He also co-founded the American Telephone and Telegraph Company (AT&T) in 1885.

Both his mother and wife were deaf, which profoundly influencing Bell’s life’s work. His research on hearing and speech led him to experiment with hearing devices, culminating in his first U.S. patent for the telephone in 1876.

Many other inventions marked Bell’s later life, including groundbreaking work in optical telecommunications, hydrofoils, and aeronautics.

From Alexander Graham Bell to the iPhone

“When one door closes another door opens; but we so often look so long and so regretfully upon the closed door, that we do not see the ones which open for us.”
– Alexander Graham Bell