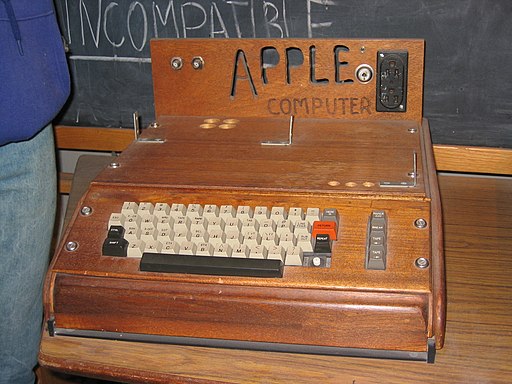 The Apple I, Apple’s first product, was a computer released, designed, and hand-built by Steve Wozniak in 1976. The idea of selling the computer came from Wozniak’s friend Steve Jobs.

In 1975, Steve Wozniak attended the Homebrew Computer Club’s first meeting and was so inspired he decided to build a computer.

Wozniak demonstrated his prototype in 1976 at the Homebrew Computer Club in Palo Alto, California.

After showing it at the Club and receiving a high level of interest, Steve Jobs suggested that they design and sell a circuit board for hobbyists to build their own computer.

Jobs sold his VW Microbus for a few hundred dollars to finance its creation, and Wozniak sold his HP-65 calculator for $500.

Soon, Steve Jobs successfully negotiated to sell about 50 completely built computers to the Byte Shop in Mountain View, California, for $500 each.

The Apple I went on sale in July 1976 for US$666.66 because Wozniak “liked repeating digits” and because of a one-third markup on the $500 wholesale price.

The Apple  I was essentially only a circuit board kit computer, the customer needed to add a keyboard, a television set, and a cover for the electronics board.

The Apple I was an innovative machine for its day. About 200 units were produced, and most were sold within ten months.

Production of the Apple I was discontinued in 1977, with its successor, the Apple II. As Wozniak was the only person who could answer most customer support questions about the computer, the company offered Apple I owners discounts and trade-ins for Apple IIs to persuade them to return their computers.

These recovered Apple I boards were then destroyed by Apple, contributing to their rarity and high price today.

In 1975, Wozniak started developing the Apple I into the computer that launched Apple when he and Jobs first began marketing it the following year.

Through his work at Apple in the 1970s and 1980s, he is recognized as a prominent pioneer of the personal computer revolution.

After leaving Apple in 1985, Wozniak pursued other businesses and philanthropic ventures.

Steven Paul Jobs (1955 – 2011) was an American business magnate, industrial designer, investor, and media proprietor. Jobs is widely recognized as a pioneer of the personal computer revolution of the 1970s and 1980s, along with Apple co-founder Steve Wozniak.

Jobs and Wozniak co-founded Apple in 1976 to sell Wozniak’s Apple I personal computer. Together they gained fame and wealth a year later with the Apple II, one of the first highly successful mass-produced microcomputers.

Jobs was forced out of Apple in 1985 after a long power struggle with the company’s board. After several successful ventures, Jobs returned to Apple as CEO of his former company.

Steve Jobs was largely responsible for helping revive Apple, which had been on the verge of bankruptcy. He worked closely with designer Jony Ive to develop a line of products that had larger cultural ramifications.

Jobs was diagnosed with a pancreatic neuroendocrine tumor in 2003 and died in 2011.

“Never trust a computer you can’t throw out a window.”
– Steve Wozniak