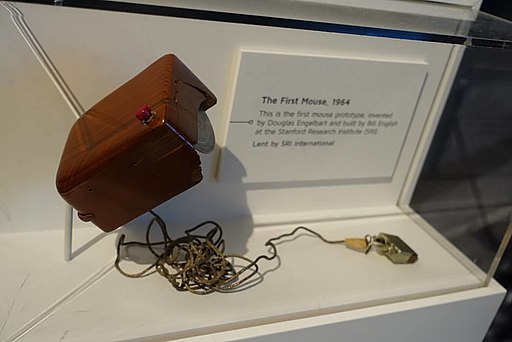 The First Computer Mouse prototype was built in 1964 and was invented by Doug Engelbart in his research lab at Stanford Research Institute. Although many innovations for interacting with computers have followed since then, the mouse remains the most popular pointing device for speed and accuracy.

A computer mouse is a hand-held pointing device that detects two-dimensional motion relative to a surface. The patent application for what we know today as the Computer Mouse was filed in 1967 as:

The first public demonstration of a mouse controlling a computer system was in 1968. Mice originally used a ball rolling on a surface to detect motion, but modern mice often have optical sensors with no moving parts.

The patent was awarded in 1970 as US Patent 3,541,541. Originally hardwired to a computer, many modern mice are cordless, relying on short-range radio communication with the connected system.

Today, in addition to moving a cursor, computer mice have buttons to allow operations such as selecting a menu item on a display.

By 1963, Engelbart,  the computer mouse’s inventor, was focused on developing computer hardware and software technology to “augment” human intelligence.

That year, he recorded his thoughts about something he initially called a “bug,” He wrote that the “bug” would be “easier” and “more natural” to use, and unlike a stylus, it would stay still when let go, and be “much better for coordination with the keyboard.”

In 1964, Engelbart built the first mouse prototype. He christened the device the mouse as early models had a cord attached to the rear part of the device, which looked like a tail and resembled a common mouse.

Engelbart never received any royalties, as his employer SRI held the patent, which expired before the mouse became widely used in personal computers.

Microsoft’s mouse shipped in 1983; however, the mouse remained relatively obscure until the appearance of the Macintosh in 1984 with an effective mouse button technology.

Douglas Carl Engelbart (1925 – 2013) was an American engineer and inventor and an early pioneer in computers and the Internet. He is best known for his work on founding the field of human-computer interaction. Engelbart’s law is named after him.

His research created the computer mouse and contributed to hypertext, networked computers, and precursors to graphical user interfaces. These were demonstrated at “The Mother of All Demos” in 1968.

In 2000, Engelbart was awarded the National Medal of Technology, the U.S.’s highest technology award. The invention of the mouse was just a small part of Engelbart’s much larger contribution to augmenting human intellect.

Engelbart’s law is the observation that the intrinsic rate of human performance is exponential. The law is based on the realization that although we use technology, the ability to improve on improvements resides within the human sphere.

Engelbart’s law is not limited to an increase in the acquisition, use of, or quantity of knowledge, or the extent or depth of participation among individuals or teams, nor the period-to-period change.

The law is independent of the domain of performance and the quantity, amount, or degree on which one chooses a measure.

Who Invented the Computer Mouse

History of the Mouse

“The computer was born to solve problems that did not exist before.”
– Bill Gates