Zouave Uniform of the Civil War

The 5th New York Volunteer Infantry uniform from 1861 consisted of a distinctive jacket, vest, sash, baggy trousers, and fez. Many volunteer units used the Zouave uniform during the first year of the Civil War on both sides of the conflict.

The uniform is based on the elite Zouave battalion of the French Army, whose dashing appearance matched its fighting abilities. The distinctive uniforms of the Zouave units were of North African origin.

The 5th New York Volunteer Infantry, also known as “Duryée’s Zouaves,” was a volunteer infantry regiment of the Union Army during the American Civil War, led by Colonel Abram Duryée.

Modeled on the French Zouaves of Crimean War fame, its tactics and uniforms differed from those of the standard infantry.

The uniforms of the 5th New York’s were modeled closely on those of French Zouaves consisting of: 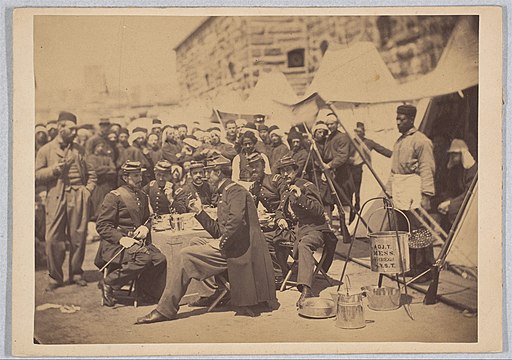 The first Zouave regiment was a mixture of Berber, Arab, French European, and black volunteers. In the 1860s, new units in several other countries called themselves Zouaves.

In the United States, Zouaves were brought to public attention by the “Zouave Cadets.”  Zouave units were then raised on both sides of the American Civil War of 1861–65.

Numerous Zouave regiments were organized from soldiers of the United States of America who adopted the name and the North African–inspired uniforms during the American Civil War.

The Union army had more than seventy volunteer Zouave regiments throughout the conflict, while the Confederates fielded about twenty-five Zouave companies.

A feature of some American Zouave units was the light infantry tactics and drill they employed. They moved at double-time, rather than marching.

They lay on their backs to load their rifles rather than standing to do so, and to fire, they rolled to face forward and shoot.

“War, at the best, is terrible, and this war of ours, in its magnitude and in its duration, is one of the most terrible.”
– Abraham Lincoln