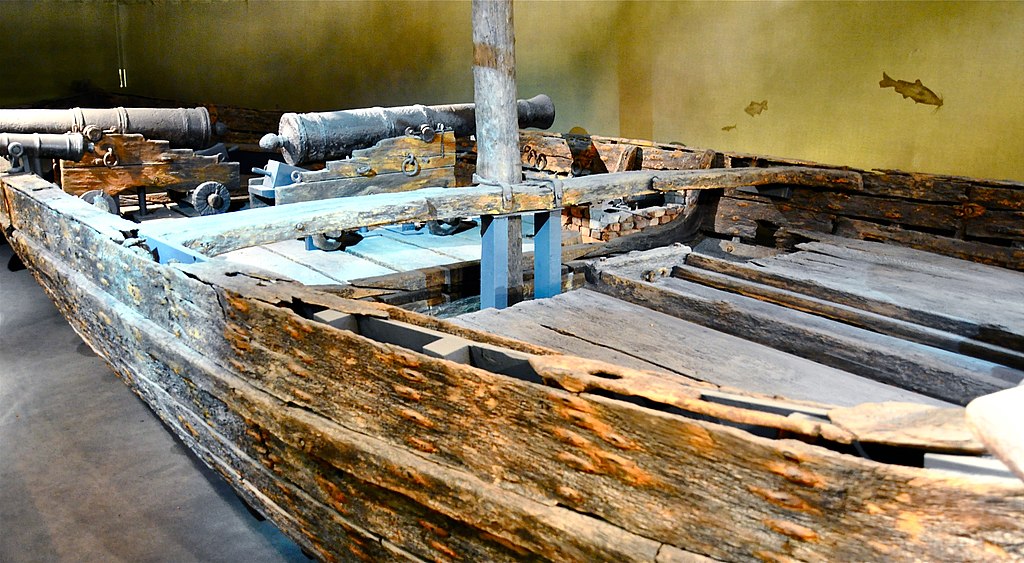 The USS Philadelphia was a gunboat of the Continental Navy. She is the oldest American Combat Ship ever found, and one of a few vessels used during the American Revolutionary War to have been recovered.

The first USS Philadelphia was part of a fleet under the command of General Benedict Arnold that fought the 1776 Battle of Valcour Island.

The more massive Royal Navy fleet damaged many of the American boats in the battle. However, the USS Philadelphia was one of the few that sank that day.

Following the primary battle, most of the other boats in the American fleet were sunk, burned, or captured.

In 1935, her remains were discovered standing upright at the bottom of Lake Champlain. The remains of the USS Philadelphia were raised and bequeathed to the Smithsonian Institution. 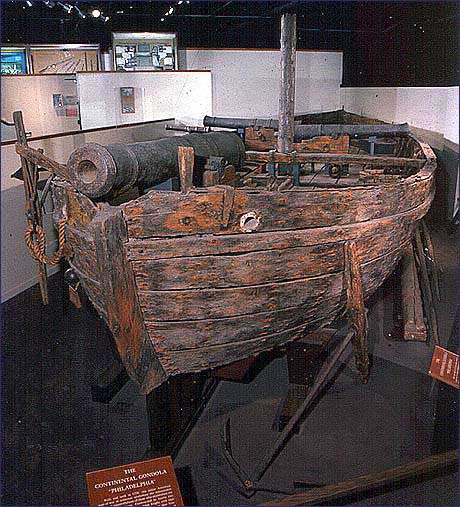 In September 1775, the Continental Army embarked on an invasion of the British Province of Quebec. The Americans viewed the province as a potential avenue for British forces to attack and divide the rebellious colonies.

The British, however, successfully drove back the Continental Army out of Quebec. The British then launched an offensive intended to reach the Hudson River.

The objective of the British was to control the upper Hudson to enable them to link their forces in Quebec with those in New York.

This strategy was intended to separate the American colonies of New England from those farther south and potentially quash the rebellion.

During their retreat from Quebec, the Americans destroyed all ships on Lake Champlain that might prove useful to the British.

The two sides then set about building their fleets. The British were able to assemble a fleet that significantly overpowered that of the Americans.

The Philadelphia was one of eight gunboats constructed in July 1776 primarily of oak. She featured a single mast with square-rigged sail and topsail and mounted three cannons, facing port and starboard.

Her aft deck was raised to accommodate a mortar, and for the crew, the boat had a canvas awning aft of the mast.

The British fleet of 25 armed vessels had more firepower than the Americans’ 15 boats.

When the two forces clashed, the British guns holed Philadelphia with a 24-pound (10.9 kg) shot, and she soon sank.

Many of his remaining ships were burned, sunk, or captured over the next two days as the British pursued the American forces.

The USS Philadelphia’s remains were discovered in 1935, sitting upright on the lake’s bottom. She was raised that year, and in addition to the guns and hull, hundreds of other items were recovered from the vessel.

The Continental Navy of the United States was formed in 1775 during the American Revolutionary War. The fleet grew through the efforts of the Navy’s patron John Adams and vigorous Congressional support.

The main goal of the Navy was to intercept shipments of British matériel and generally disrupt British maritime commercial operations.

The initial fleet consisted of converted merchantmen because of the lack of funding and resources. Warships were designed and built later in the conflict.

The Continental Navy is the first establishment of what is now the United States Navy.

Raising of the Gunboat Philadelphia (1935)

“Neither a wise man nor a brave man lies down on the tracks of history to wait for the train of the future to run over him.”
– Dwight D. Eisenhower