The National Museum of Natural History is a natural history museum administered by the Smithsonian Institution.

The museum was one of the first Smithsonian buildings explicitly constructed to hold the national collections and research facilities.

A Tour of the National Museum of Natural History, DC

The Gachalá Emerald, one of the largest and valuable gem emeralds in the world, at 858 carats uncut. It was found in the mine called Vega de San Juan, located in Gachalá, a town in Colombia.

The emerald was named in honor of Gachalá, the town where it was found.

Emerald is a gemstone and a variety of the mineral beryl and is colored green by trace amounts of chromium and sometimes vanadium.

The word “emerald” is derived Esmeralda, a variant of Latin, which originated in Ancient Greek word smaragdos meaning “green gem.”

This Skeleton of Brontotherium is an extinct species of the prehistoric hoofed mammal family Brontotheriidae, an extinct group of rhinoceros-like browsers related to horses.

It was endemic to North America around 56–34 million years ago and existed for approximately 4.1 million years.

The horns suggest that brontotheres were highly social, and the males may have performed head clashing behaviors in competition for mates.

However, unlike rhinos, the horns of brontotheres are composed of bone, the frontal bone, and nasal bone, and were placed side-to-side rather than front-to-back.

Brontotheres probably became extinct due to an inability to adapt to drier conditions and stricter vegetation such as grasses that spread during the Oligocene geologic epoch. 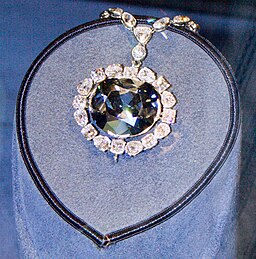 The Hope Diamond is one of the most famous jewels in the world, with ownership records dating back four centuries. Its rare blue color is due to trace amounts of boron atoms.

The Hope Diamond has long been rumored to carry a curse and was last reported to be insured for $250 million.

The jewel originated in India, where the original and larger stone was purchased in 1666 by French gem merchant, and it was named the Tavernier Blue.

The Tavernier Blue was cut and yielded the French Blue, which was sold to King Louis XIV in 1668.

In 1792, while Louis XVI and his family were imprisoned during the French Revolution, a group of thieves broke into the Royal Storehouse and stole most of the Crown Jewels.

While many jewels were later recovered, the French Blue was not among them, and it disappeared from history.

In 1793, Louis XVI was guillotined, and Marie Antoinette was guillotined nine months later, and these beheadings are commonly cited as a result of the diamond’s “curse.”

The diamond was smuggled to London and recut, with the most significant section acquiring its “Hope” name when it was acquired by a London banking family called ‘Hope’ in 1839.

After going through numerous owners, it was sold to Washington socialite before being purchased in 1949 by New York gem merchant, who later gave it to the museum in 1958.

A Tour of Natural History Museums

Secrets of the Fossil Hall

Collecting the World: Inside the Smithsonian

Introduction To The Smithsonian

“Character is like a tree and reputation like a shadow.
The shadow is what we think of it; the tree is the real thing.”
– Abraham Lincoln