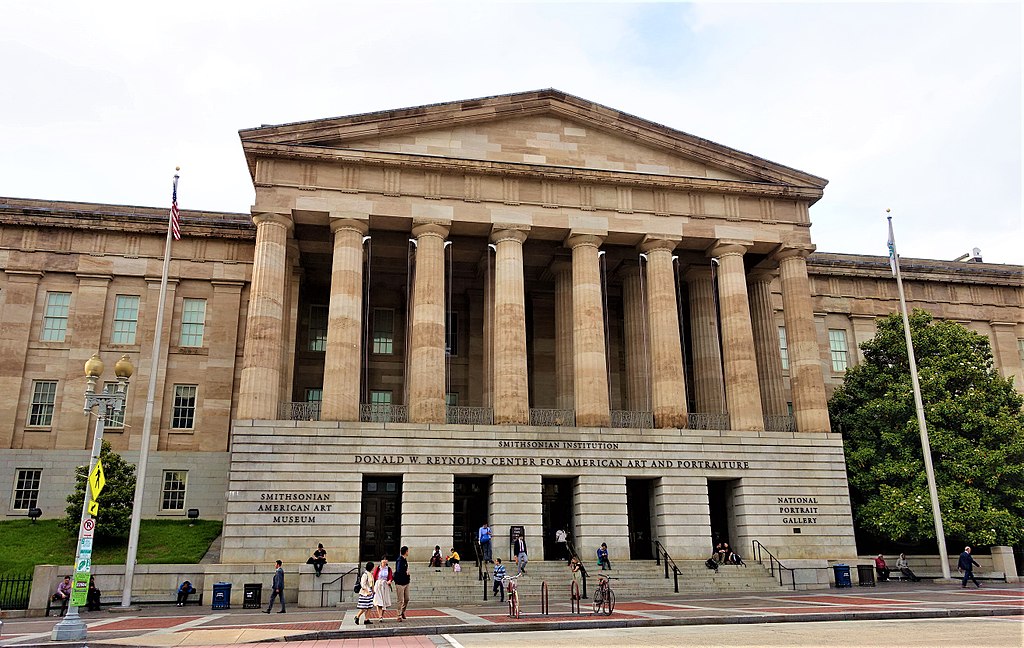 The National Portrait Gallery is part of the Smithsonian Institution and its collection focuses on images of famous Americans.

The museum is housed in the Old Patent Office Building, as is the Smithsonian American Art Museum.

Virtual Tour of the National Portrait Gallery of America

Exhibited at the Whitehouse

Highlights Tour of the National Portrait Gallery of America

“John Adams” by John Trumbull depicts the American statesman and  Founding Father, who served as the second President of the United States (1797–1801) and served two terms as the first Vice President (1789–97).

John Adams assisted Thomas Jefferson in drafting the Declaration of Independence in 1776. As a diplomat, he helped negotiate the eventual peace treaty with Great Britain.

“George Washington”  by Gilbert Stuart is a portrait of the first president of the United States and is also known as “The Athenaeum.” It is Stuart’s most celebrated and famous work.

This image of Washington has appeared on the United States one-dollar bill for more than a century and on various U.S. postage stamps.

However, he never completed this original version. After finishing Washington’s face, he held the original version to make the copies. Stuart, along with his daughters, painted over 100 reproductions of The Athenaeum.

“Mary Cassatt” by Edgar Degas depicts the American impressionist artist who was a lifelong friend of Degas and served as a model for him on several occasions.

Mary Stevenson Cassatt (1844 – 1926) was an American painter who lived much of her adult life in France, where she first befriended Edgar Degas and later exhibited among the Impressionists.

Stifled by traditional art, she regarded her exposure to the work of Edgar Degas in 1874 as a turning point in her artistic life.

Despite her high regard for Degas’ work, Cassatt did not like this portrayal of her, commenting: “It has artistic qualities but is so painful and represents me as a person so repugnant that I would not wish it to be known that I posed for it.”

Walking Tour of the National Gallery of Art in Washington, DC

“Character is like a tree and reputation like a shadow.
The shadow is what we think of it; the tree is the real thing.”
– Abraham Lincoln