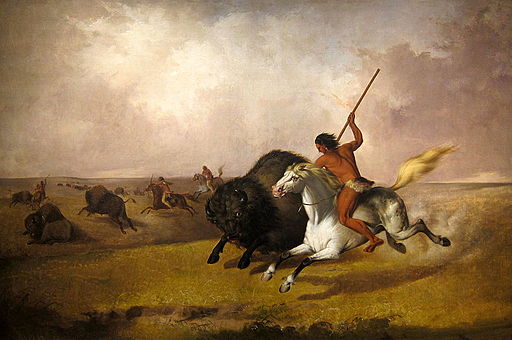 “Buffalo Hunt on the Southwestern Prairies” by John Mix Stanley

“Buffalo Hunt on the Southwestern Prairies” by John Mix Stanley depicts the American West and the Native American life in a highly naturalistic depiction.

Stanley was an artist-explorer, a painter of landscapes, and Native American portraits, and tribal life.

Unfortunately, over 200 of Stanley’s paintings, which were being held at the Smithsonian, were lost in an 1865 fire. This significant loss of most of his works makes this portrayal of the American West highly valued.

This painting is one of his few surviving works, reflecting his sympathy and skills in depicting American Indian traditions.

Stanley’s vision was to produce an atlas of the American Indian, but after losing most of his paintings, the 1865 fire, he never completed it.

He had also created an extensive collection of maps, which were held by the Smithsonian Institution. Unfortunately, they were destroyed in the 1865 fire.

We are fortunate to have this painting and can only imagine what could have been if Stanley’s paintings had not been lost.

A prehistoric horse had once existed in the Americas but became extinct some 12,000 years ago.

The horse was reintroduced to the Americas when the Spanish arrived in the 16th century. They brought horses with them and re-established the animal on the continent.

The first horses to return were 16 horses brought by Hernán Cortés in 1519. Subsequent explorers brought increasing numbers, some from Spain and others from established breeding centers set up by the Spanish in the Caribbean.

The Native American people did not obtain horses in significant numbers to become a horse culture until 1630. From trade centers in the New Mexico area, the horse culture spread north.

The Comanche people were thought to be among the first tribes to obtain horses and use them successfully. By 1742, there were reports that the Crow and Blackfoot people had horses.

The horse became part of the lives and culture of Native Americans, who viewed them as a source of wealth and used them for hunting, travel, and warfare.

Buffalo Hunt on the Southwestern Prairies

The People of the Horse

How Did The Native Americans Get Horses?

Return of the American Bison

A Tour of the Museums in Washington, D.C.

“Inside of me, there are two dogs. One is mean and evil, and the other is
good, and they fight each other all the time. When asked which one wins, I answer, the one I feed the most.”
– Sitting Bull – Native American Cheif