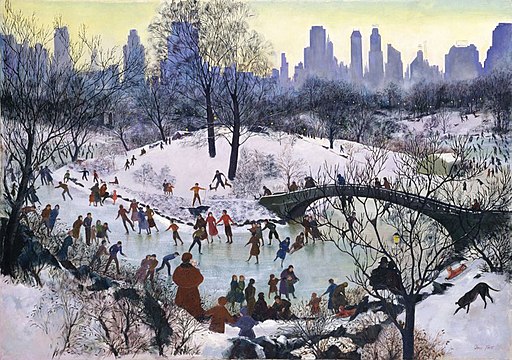 “Skating in Central Park” by Agnes Tait is a large, festive scene of winter revelers in Central Park, New York City. It depicts skaters and sledders on the frozen lake and the snowy slopes of the park.

It is late afternoon, the sun is setting behind the Manhattan skyline, and the contrast between the snow and the dark branches of the bare trees is delightful.

Agnes Tait was a painter, artist, lithographer, book illustrator, and muralist. She began work on “Skating in Central Park” under the employment from the Public Works of Art Project (PWAP). T

his program employed artists as part of the New Deal during the Great Depression. The purpose of the program was:

“to give work to artists.”

The program employed 3,749 artists, and 15,663 works were produced. The subject had to be related to the “American scene.” Artworks from the project were shown in many government facilities, including the White House and House of Representatives.

This work’s success led to further employment for Tait under the Federal Art Project, including small lithographic editions and mural work.

Central Park is an urban park in Manhattan, New York City. It is the most visited urban park in the United States, with over 40 million visitors annually and one of the most filmed locations in the world.

A non-profit organization contributes 75 percent of Central Park’s $65 million annual budget and is responsible for all primary care of the park.

Central Park was first approved in 1853 as a 778-acre (315 ha) park. Today the main attractions of the park include the Ramble and Lake. There are many amusement attractions, including:

Agnes Tait (1894–1981) was an American painter and dancer. Tait began exhibiting at the Art Institute of Chicago in 1915, and her determination to succeed in her artistic endeavors prompted her to study in Paris.

Tait’s fondness for travel and adventure led her on many trips, which she documented with her art. After spending time in Italy, Ireland, and Florida, she settled in Santa Fe to live out the rest of her life until she died in 1981.

“I just want to go through Central Park and watch folks passing by.
Spend the whole day watching people.
I miss that.”
– Barack Obama