The White House is the official residence and workplace of the president of the United States and has been the residence of every U.S. president since 1800.

The residence was designed in the neoclassical style and was initially modeled on Leinster House in Dublin, a building that today houses the Irish legislature.

When Thomas Jefferson moved into the house in 1801, he added low colonnades on each wing. In 1814, during the War of 1812, the mansion was set ablaze by the British Army in the Burning of Washington.

Because of crowding within the executive mansion itself, President Theodore Roosevelt had all work offices relocated to the newly constructed West Wing in 1901.

In the main mansion, the third-floor attic was converted to living quarters in 1927. A newly constructed East Wing was used as a reception area for social events and Jefferson’s colonnades connected the new wings. 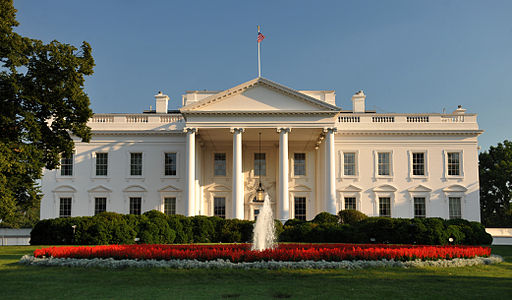 Highlights Tour of the White House

“Dwight D. Eisenhower” by James Anthony Wills depicts the American career-soldier who served as the 34th president of the United States from 1953 to 1961.

In 1952, Eisenhower entered the presidential race as a Republican to block the isolationist foreign policies.

Eisenhower’s main goals in office were to contain the spread of communism. After the Soviet Union launched Sputnik in 1957, Eisenhower authorized NASA’s establishment, which led to the Space Race.

He approved the Bay of Pigs invasion, which was left to John F. Kennedy. Eisenhower was a moderate conservative who continued New Deal agencies and expanded Social Security on the domestic front.

In his farewell address to the nation, he expressed his concerns about the dangers of government contracts to private military firms, which he dubbed “the military-industrial complex.”

Historical evaluations of his presidency place him among the upper tier of American presidents.

President Theodore Roosevelt’s official portrait was originally commissioned to Théobald Chartrand in 1902, but when Roosevelt saw the final artwork, he hated it and hid it in the darkest corner of the White House.

When family members called it the “Mewing Cat” for making him look so harmless, he had it destroyed and hired John Singer Sargent to paint a more masculine portrait.

He previously served as Governor of New York and the Vice President of the United States. Roosevelt became a driving force for the anti-trust policy while supporting Progressive Era policies.

His face is depicted on Mount Rushmore alongside George Washington, Thomas Jefferson, and Abraham Lincoln.

He made conservation a top priority and established many new national parks, forests, and monuments to preserve the nation’s natural resources.

John F Kennedy Official Portrait by Aaron Shikler was painted posthumously at the request of Jacqueline Kennedy in 1970. Unlike most presidential portraits, Kennedy is depicted as pensive, with eyes downcast and arms folded. It is a character study.

According to Shikler, Mrs. Kennedy’s only stipulation was for him to create an image different from “the way everybody else makes him look, with the bags under his eyes and that penetrating gaze. I’m tired of that image.”

Shikler drew a few sketches based on photographs, one of which was inspired by Ted Kennedy’s somber pose at his brother’s grave, his arms crossed and his head bowed. Jackie chose that sketch as the final pose.

On November 22, 1963, he was assassinated in Dallas. After Kennedy’s death, Congress enacted many of his proposals, including the Civil Rights Act and the Revenue Act of 1964.

Kennedy ranks highly in polls of U.S. presidents with historians and the general public.

“The Avenue in the Rain” by Childe Hassam

“The Avenue in the Rain” by Childe Hassam depicts Fifth Avenue in New York City draped with US flags in the rain. The painting is dominated by red and blue and whites colors of the American flag’s stars and stripes.

This painting was created in 1917, shortly before the US joined the First World War. It was a time of high patriotic fervor in the US, as Germany had extended its unrestricted submarine warfare to neutral ships, including vessels bearing the US flag.

The painting was donated to the White House in 1963 and hung in John F. Kennedy’s blue-themed President’s Bedroom. It has later hung in the Oval Office during Bill Clinton and Barack Obama’s terms.

The Gettysburg Address was a speech that U.S. President Abraham Lincoln delivered during the American Civil War at the dedication of the Soldiers’ National Cemetery in Gettysburg, Pennsylvania, in 1863.

Lincoln gave the speech a few months after the Union armies defeated those of the Confederacy at the Battle of Gettysburg. It is one of the best-known speeches in American history.

Lincoln’s address came to be seen as one of the greatest and most influential statements of American national purpose. Despite the prominent place in the history of the United States, its exact wording is disputed.

There are five known manuscripts of the Gettysburg Address in Lincoln’s hand, which differ in several details. The written documents also differ from contemporary newspaper reprints of the speech.

“Presidential Portrait of Harry Truman” by Greta Kempton depicts the United States’ 33rd president, who served between 1945 to 1953. Truman succeeded to the Presidency upon the death of Franklin D. Roosevelt after serving as vice president.

Truman grew up in Independence, Missouri, and during World War, I fought in France as a captain in the Field Artillery. Truman was elected to the United States Senate from Missouri in 1934.

Soon after succeeding to the presidency, he authorized the first and only use of nuclear weapons in war.

“Abraham Lincoln” by George Peter Alexander Healy shows the United States’ 16th President in contemplation, leaning forward in a chair, with his elbow on his knee and his chin resting on his hand.

Lincoln’s pose was inspired by an earlier painting Healy made titled the “The Peacemakers,” which depicts Lincoln and others in a historic 1865 strategy discussion with the Union high command during the final days of the American Civil War.

Lincoln sat for Healy in 1864, and Healy began working on his sketches to create a portrait of Lincoln. After Lincoln’s assassination in 1865, Healy conceived of “The Peacemakers,” which he completed in 1868.

In 1869, 4 years after Lincoln’s assassination, Healy decided to create a new portrait removing the members of Lincoln’s high command to focus only on Lincoln.

Abraham Lincoln, by William F. Cogswell, depicts Lincoln on the White House porch with the Capitol dome in the background.  Lincoln is wearing his black coat, his tall hat is on the chair, and he holds a scroll of one of his speeches.

Abraham Lincoln (1809 – 1865) served as the 16th president of the United States from 1861 to 1865. Lincoln led the nation through the American Civil War, the country’s greatest crisis.

“The Peacemakers” by George P.A. Healy

“The Peacemakers” by George P.A. Healy depicts the historic strategy meeting of March 27, 1865, in which the Union high command met on the steamer “River Queen” during the final days of the American Civil War.

This occasion allowed for the war’s only three-way meeting of President Lincoln, General Grant, and General Sherman.

Also present was Rear Admiral David Dixon Porter, who wrote about the meeting in his journal, and later recounted: “I shall never forget that council which met on board the River Queen.”

The artist, George P.A. Healy, was not present at the meeting; however, he had previously painted individual portraits of the four men and interviewed General Sherman and Rear Admiral David Dixon Porter about the meeting.

What’s Inside of the White House?

The People’s House – Inside the White House

“I think this is the most extraordinary collection of talent, of human knowledge, that has ever been gathered at the White House – with the possible exception of when Thomas Jefferson dined alone.”
– John F. Kennedy