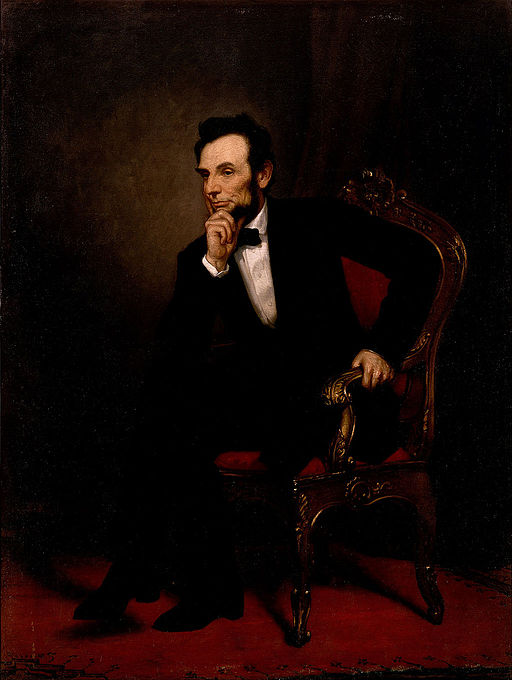 “Abraham Lincoln” by George Peter Alexander Healy shows the United States’ 16th President in contemplation, leaning forward in a chair, with his elbow on his knee and his chin resting on his hand.

Lincoln’s pose was inspired by an earlier painting Healy made titled the “The Peacemakers,” which depicts Lincoln and others in a historic 1865 strategy discussion with the Union high command during the final days of the American Civil War.

Lincoln sat for Healy in 1864, and Healy began working on his sketches to create a portrait of Lincoln. After Lincoln’s assassination in 1865, Healy conceived of “The Peacemakers,” which he completed in 1868.

In 1869, 4 years after Lincoln’s assassination, Healy decided to create a new portrait removing the members of Lincoln’s high command to focus only on Lincoln.

In 1869, Congress authorized the commission of a portrait of Lincoln to hang in the White House. Healy sent this portrait to Washington, hoping it would be chosen.

However, Ulysses S. Grant, then the President of the United States, selected another portrait painted by William F. Cogswell (see below).

“I have never seen a portrait of my father, which is to be compared with it in any way.”

The portrait passed to Robert Todd Lincoln’s widow, who bequeathed it to her daughter, with the understanding that it would be eventually given to the White House.

It entered the White House collection in 1938. Reproductions of the portrait hang in the Illinois Governor’s Mansion in Springfield, Illinois, and the Minnesota House of Representatives chamber behind the speaker’s chair. 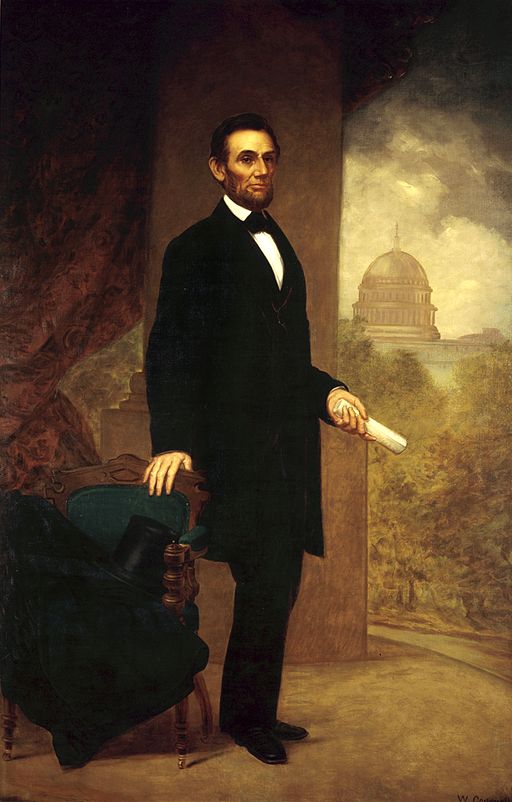 Abraham Lincoln, by William F. Cogswell, depicts Lincoln on the White House porch with the Capitol dome in the background.  Lincoln is wearing his black coat, his tall hat is on the chair, and he holds a scroll of one of his speeches.

Abraham Lincoln (1809 – 1865) served as the 16th president of the United States from 1861 to 1865. Lincoln led the nation through the American Civil War, the country’s greatest crisis.

Lincoln was born into poverty in a log cabin and was raised on the frontier in Indiana. He was self-educated and became a lawyer, Whig Party leader, Illinois state legislator, and U.S. Congressman from Illinois.

Lincoln ran for President in 1860, sweeping the North in victory. The southern states soon began seceding from the union, and the new Confederate States fired on Fort Sumter, a U.S. fort in the South.

Lincoln called up forces to suppress the rebellion and restore the Union. His Gettysburg Address became a historic clarion call for nationalism and democracy.

He succeeded in preserving the Union, abolishing slavery, and bolstering the federal government. He also sought to heal the war-torn nation through reconciliation.

In 1865, just days after the war’s end, Lincoln was attending a play at Ford’s Theatre with his wife when a Confederate sympathizer assassinated him.

Lincoln is remembered as the United States hero, and he is consistently ranked as one of the greatest presidents in American history.

George Peter Alexander Healy (1813 – 1894) was an American portrait painter. He was one of the most popular painters of his day, and his sitters included many of the prominent people of his time.

Healy’s 1877 portrait of a young Lincoln was the model used for a Lincoln postage stamp, issued in 1959, the 150th anniversary of Lincoln’s birth. 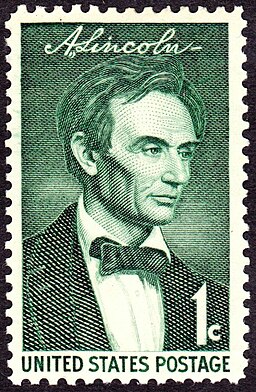 Cogswell is most noted for his portraits of Ulysses S. Grant, currently hanging in the United States Senate, and Abraham Lincoln, which hangs in the White House.

He also painted Hawaiian royalty, and many public collections hold his paintings.

“Most folks are as happy as they make up their minds to be.”
– Abraham Lincoln