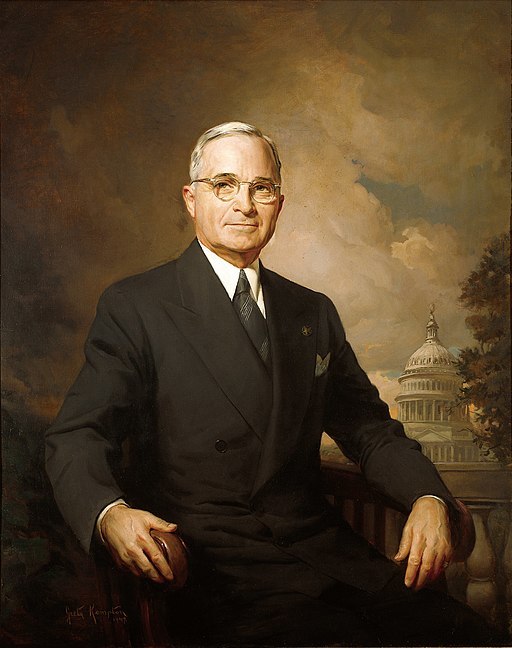 “Presidential Portrait of Harry Truman” by Greta Kempton depicts the United States’ 33rd president, who served between 1945 to 1953. Truman succeeded to the Presidency upon the death of Franklin D. Roosevelt after serving as vice president.

Truman grew up in Independence, Missouri, and during World War, I fought in France as a captain in the Field Artillery. Truman was elected to the United States Senate from Missouri in 1934.

Soon after succeeding to the presidency, he authorized the first and only use of nuclear weapons in war.

In the 1948 presidential election, he won a surprise victory that secured his own presidential term. Truman’s administration engaged in an internationalist foreign policy and renounced isolationism.

During the Cold War, Truman oversaw the Berlin Airlift and Marshall Plan in 1948. When North Korea invaded South Korea in 1950, he gained United Nations approval to intervene in what became known as the Korean War.

His most notable achievements included defeating Communist takeovers in Greece and Turkey and repelling the USSR’s attempt to push the West out of Berlin.

Truman also presided over the rebuilding of  Western Europe’s war-torn economies. A strategy that has been one of the greatest triumphs of American diplomacy.

The Vienna-born Greta Kempton was Harry Truman’s favorite portraitist, and she painted his official White House portrait in 1947.

This portrait pose became part of the official campaign poster for his 1948 election. The portrait likeness was later used on a 1983 postage stamp honoring Truman and a 1985 coin celebrating his hundredth birthday.

Harry Truman – The President Without a College Degree

Greta Kempton (1901 – 1991), born in Vienna, Austria, served as the White House artist during the Truman administration.

Kempton emigrated to the United States in the 1930s and became a well-established portrait painter. Kempton became well known in Washington, and in 1947, she painted a portrait of Bess Truman.

She was then commissioned to paint a president’s portrait, the first of five Kempton paintings for which Mr. Truman posed.

She remained active as a painter well into her eighties, and her works are in the collections of the White House and several government institutions and museums.

“It is amazing what you can accomplish if you do not care who gets the credit.”
– Harry S Truman