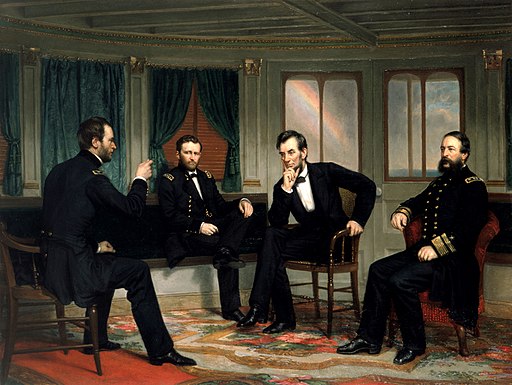 “The Peacemakers” by George P.A. Healy

“The Peacemakers” by George P.A. Healy depicts the historic strategy meeting of March 27, 1865, in which the Union high command met on the steamer “River Queen” during the final days of the American Civil War.

This occasion allowed for the war’s only three-way meeting of President Lincoln, General Grant, and General Sherman.

Also present was Rear Admiral David Dixon Porter, who wrote about the meeting in his journal, and later recounted:

“I shall never forget that council which met on board the River Queen.
On the determinations adopted there depended peace,
or a continuation of the war with its attendant horrors.”

The artist, George P.A. Healy, was not present at the meeting; however, he had previously painted individual portraits of the four men and interviewed General Sherman and Rear Admiral David Dixon Porter about the meeting.

“Mr. Lincoln was then dead, but Healy had a portrait, which he himself had made at Springfield some five or six years before.
With this portrait, some existing photographs… he made the picture of Mr. Lincoln seen in this group.
For General Grant, Admiral Porter, and myself, he had actual sittings,
and I am satisfied with the four portraits in this group of Healy’s are the best extant.”

Healy shows the men engaged in a meeting with Grant talking while Lincon is listening and reflecting with his chin in his hand. Outside the window is a rainbow symbolizing the coming peace.

Healy was given descriptions of the individuals’ relative positions, the dimensions, shape, and furniture of the cabin of the “Ocean Queen.”

Sherman reported that he was confident that the painting of the meeting in the steamer “River Queen” was accurate:

“.. it is certain that we four sat pretty much as represented,
and were engaged in an important conversation during the forenoon of March 28, 1865,
and that we parted never to meet again.”

The large life-size version of the painting was destroyed in the 1893 fire in Chicago. Healy’s surviving smaller version was rediscovered in 1922, after lying unnoticed in a family storeroom for fifty years.

The acquisition of the painting by the Truman White House in 1947, a few years after another great conflict, World War II, has added to the painting’s legacy. The pose of Lincoln in this painting inspired Healy’s 1869 portrait, “Abraham Lincoln.”

In the White House, the painting was displayed in the Treaty Room of the White House from the Kennedy through the George W. Bush presidencies. During the Obama administration, it was in the private President’s Dining Room.  There is also a copy of the painting at the Pentagon.

George Peter Alexander Healy (1813 – 1894) was an American portrait painter. He was one of the most popular painters of his day, and his sitters included many of the prominent people of his time.

Healy’s 1877 portrait of a young Lincoln was the model used for a Lincoln postage stamp, issued in 1959, the 150th anniversary of Lincoln’s birth.

“Most folks are as happy as they make up their minds to be.”
– Abraham Lincoln