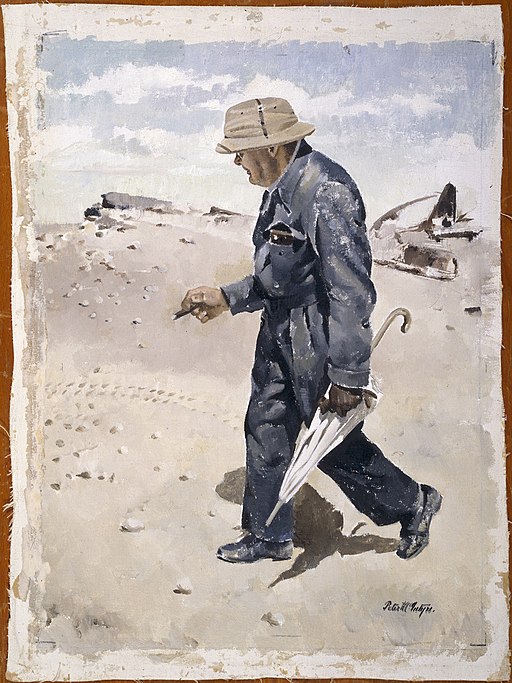 “Winston Churchill in Siren Suit, 1 August 1942” by Peter McIntyre depicts the Prime Minister whose leadership during World War Two was characterized by a continual refusal to surrender or compromise, inspiring a culture of steadfast resistance within Britain.

The British war leader was wearing his siren suit while in Egypt in August 1942, he holding a sun umbrella and trademark cigar during one of his tours to a wartime desert location.

This portrait of Churchill was painted by artist Peter McIntyre who was appointed New Zealand’s official war artist. McIntyre covered the campaigns in Greece, Crete, the Western Desert, Tripolitania, Tunisia, and Italy.

Command of the Eighth Army was given to General William Gott, but he was killed only three days later, and General Montgomery replaced him.

Churchill returned to Cairo in mid-August and could see for himself that the Alexander and Montgomery combination was already a winning combination.

As 1942 drew to a close, the tide of war began to turn with the Allied victory in the battle of El Alamein. Until then, the Allies had been on the defensive, but the Germans were from then onward.

Churchill had also ordered the church bells to be rung throughout Great Britain for the first time since early 1940.

El Alamein was a resounding victory for the Eighth Army with Rommel’s forces in full retreat.

The siren suit is a one-piece garment for the whole body that can easily be put on or taken off, originally designed for use on the way to, and in, air-raid shelters.

Winston Churchill played a large part in popularising it as an item of clothing during World War II.

The suit solved the problems encountered when seeking shelter during nighttime air raids in the United Kingdom during World War II. It was roomy and could be quickly put on over nightclothes when the sirens announced an imminent air raid.

Wearing dresses or professional clothing while in an air raid shelter was not practical. Sirens gave warning of the raids, so these suits came to be known as siren suits. 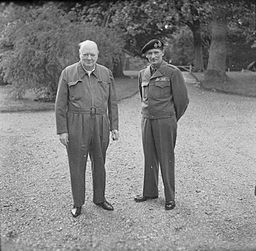 Prime Minister Winston Churchill, wearing his siren suit,
with Field Marshal Bernard Montgomery on 19 May 1944
during a tour of forces preparing to invade Normandy.

In August 1942, Lieutenant-General Bernard Montgomery was appointed and led the Eighth Army offensive. The Allied victory was the beginning of the end of the Western Desert Campaign.

It eliminated the Axis threat to Egypt, the Suez Canal, and the Middle Eastern and Persian oil fields.

The battle revived the Allies’ morale, being the first big success against the Axis since Operation Crusader in late 1941.

The battle coincided with the Allied invasion of French North Africa in Operation Torch on 8 November, the Battle of Stalingrad, and the Guadalcanal Campaign.

Winston Leonard Spencer Churchill (1874 –  1965) was Prime Minister of the United Kingdom from 1940 to 1945 when he led the country to victory in the Second World War.

Out of office during the 1930s, Churchill took the lead in calling for British rearmament to counter the growing threat of militarism in Nazi Germany.

In 1940, he became Prime Minister and oversaw British involvement in the Allied war effort against the Axis powers, resulting in victory in 1945.

Widely considered one of the 20th century’s most significant figures. He is seen as a victorious wartime leader who played an important role in defending Europe’s liberal democracy against the spread of fascism.

On the outbreak of the Second World War, McIntyre was in London and attempted to enlist in the British Army but was declined. He soon joined the 2nd New Zealand Expeditionary Force (2NZEF) in London.

In 1940, his unit left England for Egypt, where McIntyre’s artistic skills were soon recognized. His skills soon saw him transferred to the headquarters of the 2nd New Zealand Division, preparing maps and drawings of Italian defensive positions based on aerial photographs.

His workspace was surrounded by some of his own artwork, which soon attracted the division’s commander’s attention, and he was selected as the official New Zealand war artist.

McIntyre’s war artwork is part of the National Collection of War Art under Archives NZ’s care.

“This is not the end. It is not even the beginning of the end. But it is, perhaps, the end of the beginning.”
– Winston Churchill