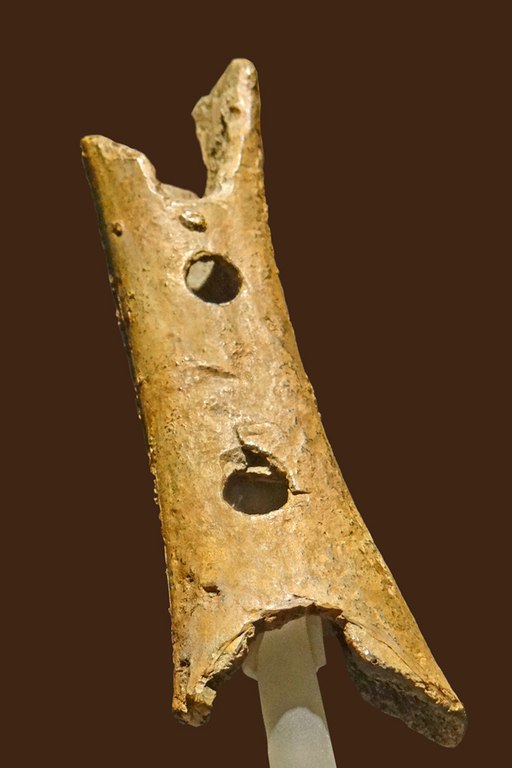 The Divje Babe Flute is made from the bone of a cave bear femur, and it is pierced by holes that have the spacing and alignment of a flute. It is possibly the world’s oldest known musical instrument, and some archeologists believe that Neanderthals made it.

Divje Babe is the oldest known archaeological site in Slovenia. The cave is 45 meters (148 ft) long and up to 15 meters (49 ft) wide and is near Cerkno and the Idrijca River in Slovenia.

Researchers have uncovered more than 600 archaeological items in at least ten levels, including twenty hearths and the skeletal remains of cave bears.

This presumed flute has been associated with the period of the Neanderthals, about 43,000 years ago. It has been suggested that Neanderthals made it as a form of musical instrument.

Some argue that the Divje Babe Flute is a product of modern humans, but other scholars have disputed this.

In 1995, archeologists found the cave bear femur at the Divje Babe site near a Mousterian hearth. It is broken at both ends, with two complete holes and what may be the incomplete remains of one hole at each end.

The bone flute may have had four or more holes before being broken and damaged.

If the bone is indeed a usable flute, there remains the question about whether the holes are made by Neanderthal’s hands or punctures from a carnivore bite. Numerous academics have hypothesized a carnivore origin.

The bone has become a noted attraction, with tunes played on a clay replica, and it has become a source of Slovenian national pride.

In the 1920s and 1930s, an archaeologist discovered tens of bones with holes at another site. The Potok Cave in the Eastern Karawanks produced significant finds, but almost all were destroyed during World War II.

Of those still preserved, the best known is a mandible of a cave bear with three holes in the mandibular canal.

Since World War II, similar specimens have been found in Mokrica Cave and Betal Rock Shelter in Slovenia.

These bones with holes have been dated to the end of the Mousterian and the beginning of the Aurignacian periods. However, nothing similar has yet been found in other parts of Europe.

Regarding the Divje Babe Flute, the probability that four randomly placed holes would appear inline in a recognizable musical scale is very low. There is also no evidence that the two holes could have been bitten at the same time.

Laboratory experiments that have pierced holes in fresh bear bones, as a carnivore would, have been found it would cause the bones to split.

The National Museum of Slovenia argues that this evidence has “finally refuted hypotheses that the bone was perforated because of a bear bite.” The manufacture by Neanderthals “is reliably proven.”