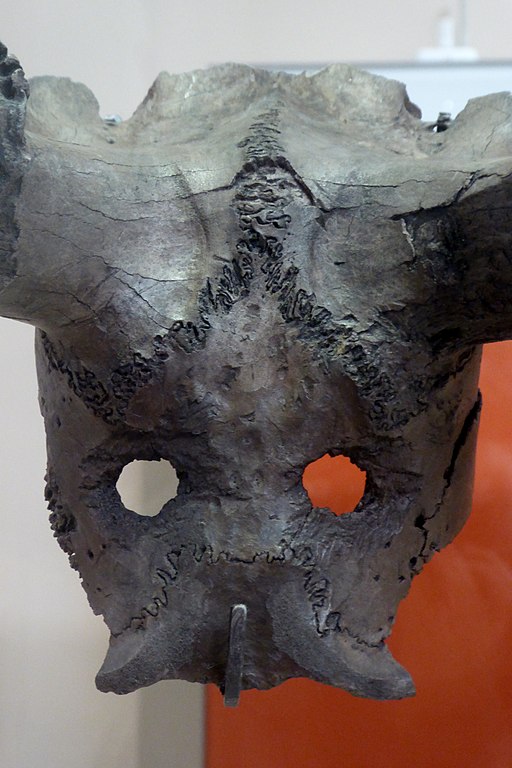 This Prehistoric Deer Skull Headdress is over 11,000 years old. It was discovered at Star Carr, which is a Mesolithic archaeological site in North Yorkshire, England.

Excavation of the site began in 1948, and it is famous for the rare artifacts discovered. Along with the flints, there were a large number of objects made of red deer and elk antler, elk bone, and other bone.

The rare objects discovered included worked amber, shale, haematite, iron pyrites, a decorated pendant. One of the most unusual finds was the antler headdresses.

Two holes were perforated through the skull with flint tools. Also, the inside of the skull cap was smoothed. The antlers on each headdress have been carefully trimmed to reduce weight. These modifications were designed to allow the deer skull headdresses to be used as headgear.

The prehistoric artifacts from the Star Carr site are now divided between four institutions: The British Museum, the Yorkshire Museum in York, the University Museum of Archaeology and Anthropology at Cambridge, and the Scarborough Museum.

Deer antler headdresses or antler caps were modified deer skulls, including the antlers that were used as a headdress. They are often believed to be the oldest traces of shamanic and religious behavior.

These headdresses were used as a disguise during the hunt or as part of the shamanic dress.

The antlers have typically been reduced and lightened as the bony inequalities and protuberances were removed or smoothed. These refinements suggest that they had been worn as a headdress, rather than serving as stationery items.

The scholarly research of Antler caps has not yet developed beyond a debate about ethnological and ethnographical comparisons. The lack of research means that the modified headdresses are discussed only in theoretical terms.

The appearance of hybrid creations, half human – half animal, and the increasing importance of deer antlers suggest there was a special meaning of metamorphosed headdresses for the hunter-gatherers.

Star Carr is a Mesolithic archaeological site in North Yorkshire, England. It is the most important Mesolithic site in Great Britain, as crucial as Stonehenge is to the Neolithic period.

The site was occupied during the early Mesolithic period, in which the ice age had ended. Still, sea levels had not yet risen sufficiently to separate Britain from continental Europe.

Highlights among the finds include Britain’s oldest structure, 21 red deer stag skull-caps that may have been headdresses and nearly 200 projectile, or harpoon, points made of red deer antler.

Also discovered is a decorated pendant, thought to be the oldest known Mesolithic art in Britain.

These organic materials were preserved because they were buried in waterlogged peat. Usually, the only remains on Mesolithic sites are stone tools.

The flint found at Star Carr came from nearby beaches, which at time of occupation would have been about 10 to 20 km (6 to 12 mi) distant, and also from the Yorkshire Wolds immediately to the south of the site.

Mesolithic (Greek: “middle” and “stone”) is the period between the Paleolithic and the Neolithic. The Mesolithic has different periods in different parts of Eurasia. In Europe, it spans roughly 15,000 to 5,000 BP.

The type of culture associated with the Mesolithic is related to a decline in the group hunting of large animals in favor of a broader hunter-gatherer way of life.

During this period, the development of more sophisticated and typically smaller lithic tools and weapons evolved compared to the heavily chipped equivalents typical of the Paleolithic.

The more permanent settlements tend to be close to the sea or inland waters, offering a good supply of food. Mesolithic societies are not seen as very complex, and burials are relatively simple; in contrast, grandiose burial mounds are a mark of the Neolithic.

Red Deer in Folklore and Art

Red deer are widely depicted in cave art found throughout European caves, with some of the artwork dating from as early as 40,000 years ago.

Siberian cave art from the Neolithic of 7,000 years ago has abundant depictions of red deer, including what can be described as spiritual artwork, indicating the importance of this mammal to the peoples of that region.

Red deer are also often depicted on Pictish stones (circa 550–850 AD), from the early medieval period in Scotland, usually as prey animals for human or animal predators.

In medieval hunting, the red deer was the most prestigious quarry, especially the mature stag, which in England was called a hart. 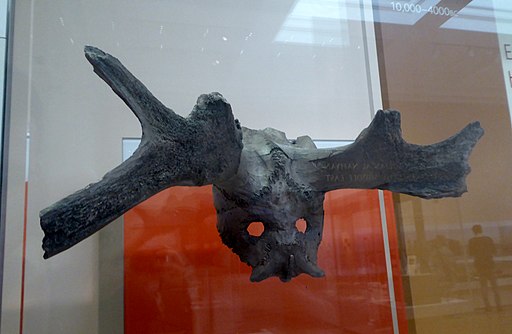