The Gettysburg Address was a speech that U.S. President Abraham Lincoln delivered during the American Civil War at the dedication of the Soldiers’ National Cemetery in Gettysburg, Pennsylvania, in 1863.

Lincoln gave the speech a few months after the Union armies defeated those of the Confederacy at the Battle of Gettysburg. It is one of the best-known speeches in American history.

Lincoln’s address came to be seen as one of the greatest and most influential statements of American national purpose. Despite the prominent place in the history of the United States, its exact wording is disputed.

There are five known manuscripts of the Gettysburg Address in Lincoln’s hand, which differ in several details. The written documents also differ from contemporary newspaper reprints of the speech.

The five manuscript copies of the Gettysburg Address are named for the person who received it from Lincoln. Lincoln gave copies to his private secretaries, John Nicolay and John Hay. 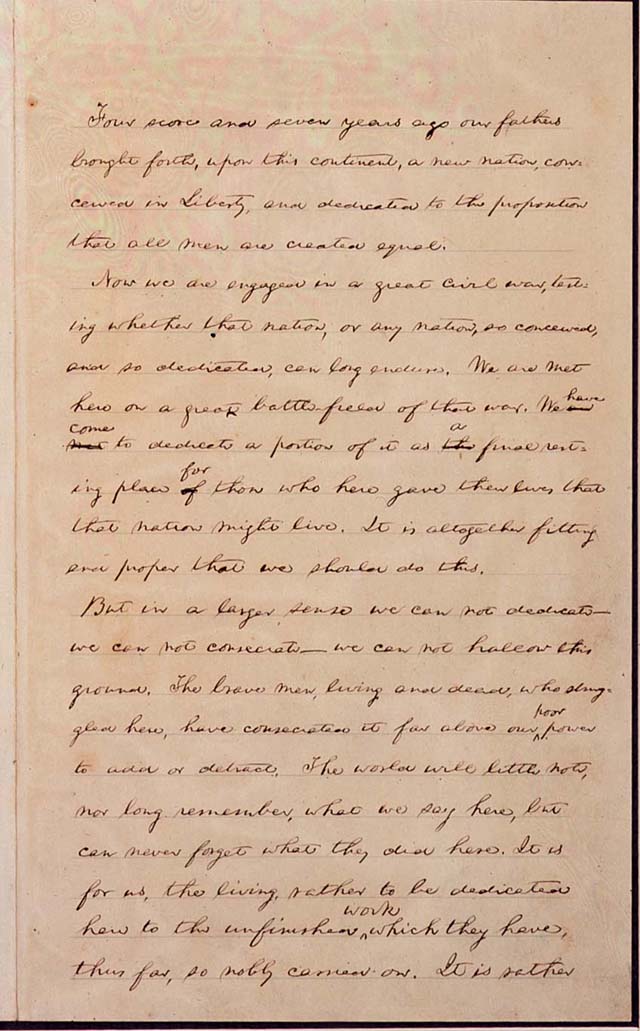 The other three copies of the address, the Everett, Bancroft, and Bliss copies, were written by Lincoln for charitable purposes well after Gettysburg Address.

The Bliss copy had a title and was signed and dated, so it became accepted as the standard text of Lincoln’s Gettysburg Address.

Everett copy:  The Everett copy is now in possession of the Illinois State Historical Library in Springfield, Illinois, where it is displayed in the Treasures Gallery of the Abraham Lincoln Presidential Library and Museum.

Bancroft copy:  The Bancroft copy of the Gettysburg Address is now held by the Division of Rare and Manuscript Collections in the Carl A. Kroch Library at Cornell. It is the only one of the five copies to be privately owned.

Bliss copy:  The Bliss copy is now displayed in the Lincoln Room of the White House, a gift of the former Cuban Ambassador to the United States.

Four score and seven years ago our fathers brought forth on this continent, a new nation, conceived in Liberty, and dedicated to the proposition that all men are created equal.

Now we are engaged in a great civil war, testing whether that nation, or any nation so conceived and so dedicated, can long endure. We are met on a great battle-field of that war. We have come to dedicate a portion of that field, as a final resting place for those who here gave their lives that that nation might live. It is altogether fitting and proper that we should do this.

But, in a larger sense, we can not dedicate—we can not consecrate—we can not hallow—this ground. The brave men, living and dead, who struggled here, have consecrated it, far above our poor power to add or detract. The world will little note, nor long remember what we say here, but it can never forget what they did here. It is for us the living, rather, to be dedicated here to the unfinished work which they who fought here have thus far so nobly advanced. It is rather for us to be here dedicated to the great task remaining before us—that from these honored dead we take increased devotion to that cause for which they gave the last full measure of devotion—that we here highly resolve that these dead shall not have died in vain—that this nation, under God, shall have a new birth of freedom—and that government of the people, by the people, for the people, shall not perish from the earth.
—Abraham Lincoln 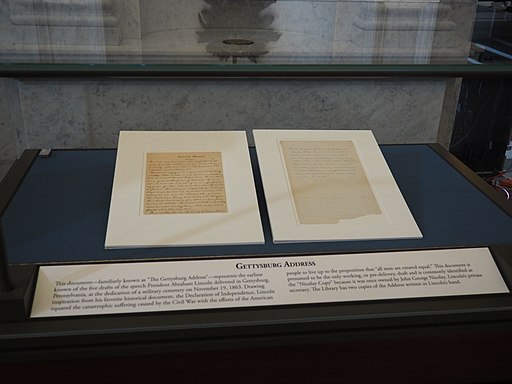 Dedication Ceremony of the Gettysburg National Cemetery in 1863

Following the Battle of Gettysburg in July 1863, the fallen Union soldiers were interred in graves at the National Cemetery at Gettysburg. For the dedication ceremony, the committee invited President Lincoln with the words:

“It is the desire that, after the Oration, you, as Chief Executive of the nation, formally set apart these grounds to their sacred use by a few appropriate remarks.”

On the train trip to Gettysburg, Lincoln felt weak and dizzy. After the speech, Lincoln was feverish and pale, with a severe headache. A protracted illness followed, and it was later diagnosed that he had a mild case of smallpox when he delivered his speech.

While it is Lincoln’s two minutes speech that has gone down in history, it was Edward Everett’s two-hour oration that was promoted as the “Gettysburg address” that day. It is now seldom-read.

Despite the historical significance of Lincoln’s speech, modern scholars disagree as to its exact wording. Handwritten copies by Lincoln himself differ in their text, punctuation, and structure.

Historians have however noted parallels between Lincoln’s speech and Pericles’s Funeral Oration during the Peloponnesian War, as described by Thucydides.

The Nicolay copy of the Gettysburg Address is often called the “first draft” because it is believed to be the earliest copy that exists. Scholars disagree over whether the Nicolay copy was the reading copy that Lincoln held at Gettysburg.

The existence of the Hay copy was made in 1906 after an extensive search among the papers of John Hay. It differs somewhat from the Nicolay copy and contains numerous omissions and inserts in Lincoln’s hand.

The omissions are critical to the underlying meaning of the sentence. In the Hay copy, as in the Nicolay copy, the words “under God” are not present. 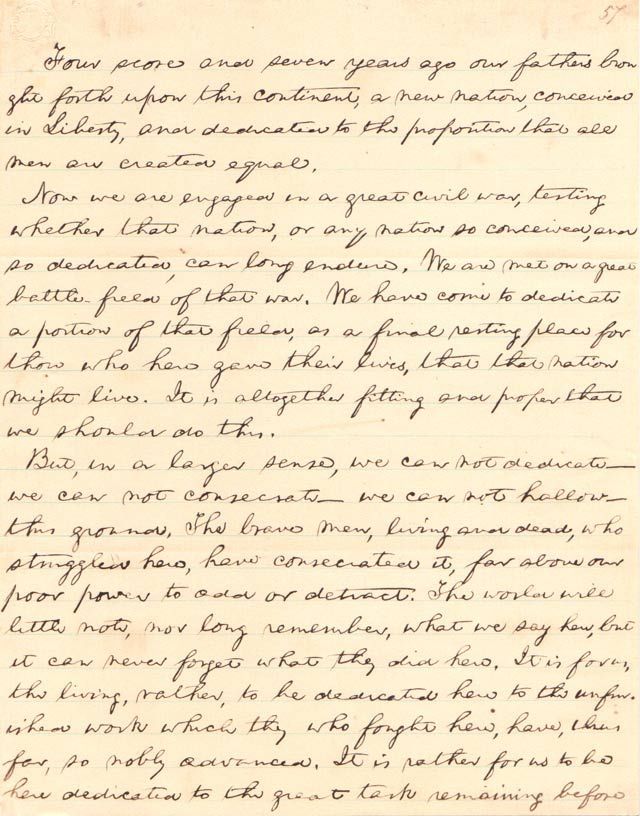 The Everett copy was sent by President Lincoln to Edward Everett in early 1864, at Everett’s request. Everett was collecting the speeches into one bound volume to sell for the benefit of soldiers. The draft Lincoln sent became the third autograph copy.

The Bancroft copy of the Gettysburg Address was for George Bancroft, the historian and former Secretary of the Navy. Bancroft planned to use it to raise funds at the  Soldiers’ and Sailors’ Sanitary Fair.

Lincoln then wrote a fifth draft, copy, named for Colonel Alexander Bliss, Bancroft’s stepson and publisher, it is the only draft to which Lincoln affixed his formal signature.

The Bliss version has become the standard version of the address and the source for the inscription on the South wall of the Lincoln Memorial.

Crowd with Lincoln at Gettysburg. A red arrow points to Abraham Lincoln.

How Lincoln Changed the World

Different versions of the Gettysburg Address

“A new nation, conceived in Liberty, and dedicated to the proposition that all men are created equal.”
― U.S. President Abraham Lincoln