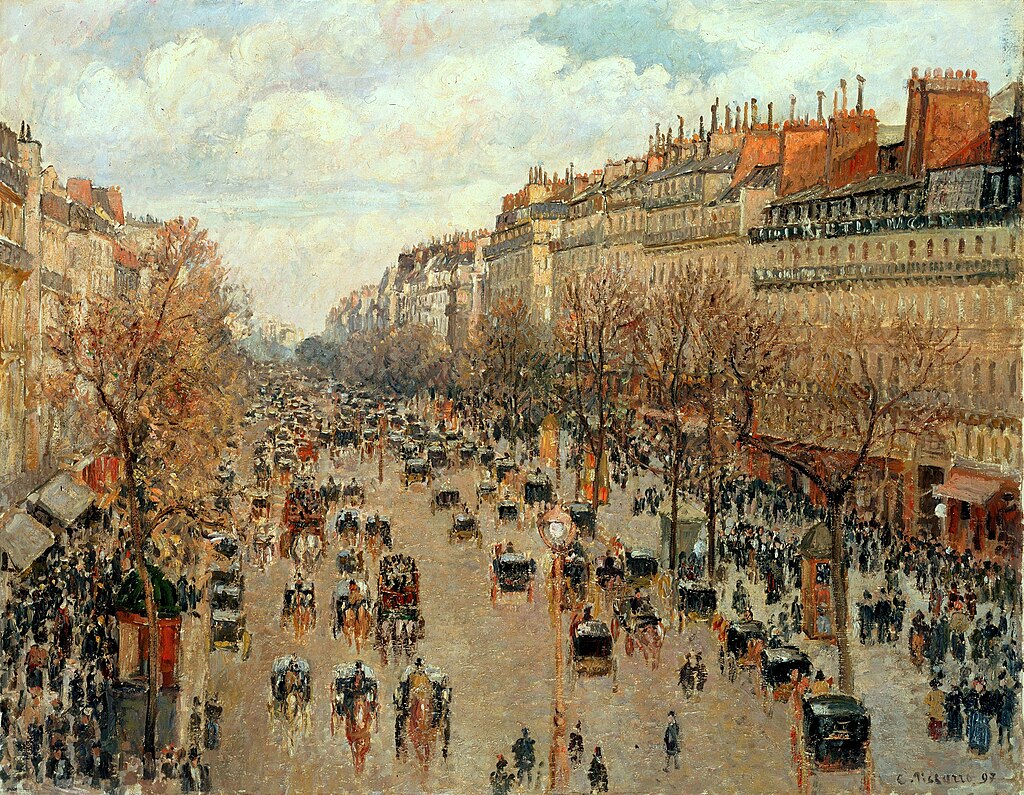 “Boulevard Montmartre: Afternoon, Sunshine” by Camille Pissarro became part of a thirteen artwork series of the famous Boulevard. Pissarro painted it in 1897 after renting a room at the Grand Hotel de Russie in Paris with a perfect view.

Pissarro wanted to capture the true essence of the busy Parisian street. From his elevated hotel balcony, he obtains a bird’ s-eye view of the people, carriages, and life that passed before him.

Each painting in the “Boulevard Montmartre Series” depicts the same scene and view in different climatic conditions and at different times of the day.

This painting depicts Paris’ life during the working hours of the day full of activity and purpose. This image portrays a dynamic urban landscape, captured by Pissarro’s rapid brushwork. 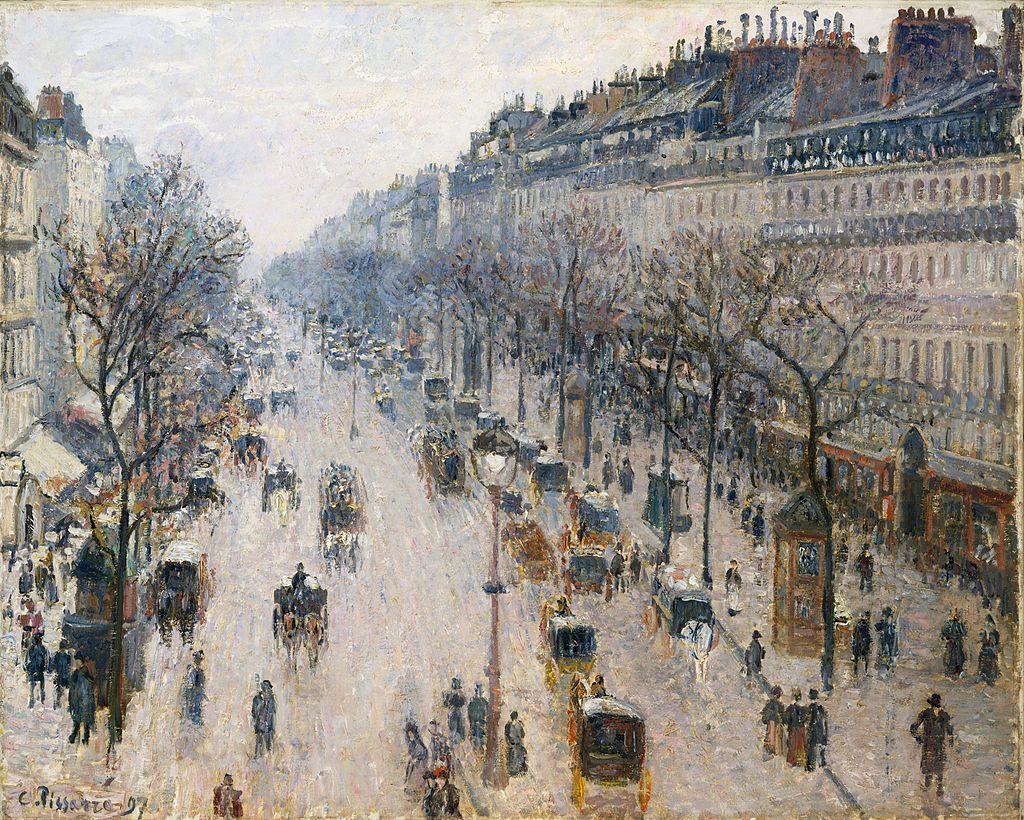 The Boulevard Montmartre on a Winter Morning by Camille Pissarro

“The Boulevard Montmartre on a Winter Morning” by Camille Pissarro was painted after his six years in rural Éragny.

Pissarro marveled that he could “see down the whole length of the boulevards” with “almost a bird’ s-eye view of carriages, omnibuses, people, between big trees, big houses that have to be set straight.”

In his urban city landscapes, he emphasized order, proportion, and structure, while depicting dynamic movement.

Not through attention to fine details, but with less individually drawn figures, he focused on broad subjects in his portrayal of real life. His brushstrokes consist of short, loose, semi-thick strokes to enhance the idea of motion running through his work.

At first glance, the work looks blurry until the viewer studies the painting and sees the qualities of details he positions through his stylistic brushstrokes.

“Boulevard Montmartre at Night” by Camille Pissarro shows the busy Parisian boulevard at night, wet after a downpour.

This work gave Pissarro the opportunity to study the effect of the new electric street lamps, aligned in the middle of the street, and the orange glow of the gas lights in the windows.

Pissarro tried to represent the different effects of the artificial lights in different colors, both pale and bluish and warm and intense.

Abstract vertical shapes represent the crowds flowing under the trees and past the shops. A series of carriages lined one side of the road, with the lights on, as they wait for the exit of the show’s guests at the Moulin Rouge, located around the corner.

The dark sky is misty, and the clouds hang in the air. However, stars in the upper part of the sky, shown as small sketches of white, indicating that the clouds will pass soon.

Pissarro produced a series of this same scene and view in different climatic conditions and at different times of the day.

He was staying at the Grand Hôtel de Russie, and he painted this perspective from his window resulting in a series of pictures from the top of Boulevard Montmartre. This painting is the only one in the series depicting a night view.

The Boulevard Montmartre on a Winter Morning by Camille Pissarro

Don’t be afraid in nature: one must be bold, at the risk of having been deceived and making mistakes.

It is absurd to look for perfection.

I sometimes have a horrible fear of turning up a canvas of mine. I’m always afraid of finding a monster in place of the precious jewels I thought I had put there!

At times I come across works of mine which are soundly done and really in my style, and at such moments I find great solace.

Blessed are they who see beautiful things in humble places where other people see nothing.

When you do a thing with your whole soul and everything that is noble within you, you always find your counterpart.

Everything is beautiful; all that matters is to be able to interpret.

Cover the canvas at the first go, then work at it until you see nothing more to add.

Observe that it is a great error to believe that all mediums of art are not closely tied to their time.

Paint the essential character of things.

I remember that, although I was full of fervor, I didn’t have the slightest inkling, even at forty, of the deeper side to the movement we were pursuing by instinct. It was in the air!

I began to understand my sensations, to know what I wanted, at around the age of forty – but only vaguely.

At fifty, that is in 1880, I formulated the idea of unity, without being able to render it. At sixty, I am beginning to see the possibility of rendering it.

I regard it as a waste of time to think only of selling: one forgets one’s art and exaggerates one’s value.

All the sorrow, all the bitterness, all the sadness, I forget them and ignore them in the joy of working.

At fifty, that is in 1880, I formulated the idea of unity, without being able to render it. At sixty, I am beginning to see the possibility of rendering it.

One can do such lovely things with so little. Subjects that are too beautiful end by appearing theatrical.

Cover the canvas at the first go, then work at it until you see nothing more to add.

It is only by drawing often, drawing everything, drawing incessantly, that one fine day you discover to your surprise that you have rendered something in its true character.

Work at the same time on the sky, water, branches, ground, keeping everything going on an equal basis… Don’t be afraid of putting on color… Paint generously and unhesitatingly, for it is best not to lose the first impression.

“Blessed are they who see beautiful things in humble places where other people see nothing.”

A Trip Through Paris, France in late 1890s