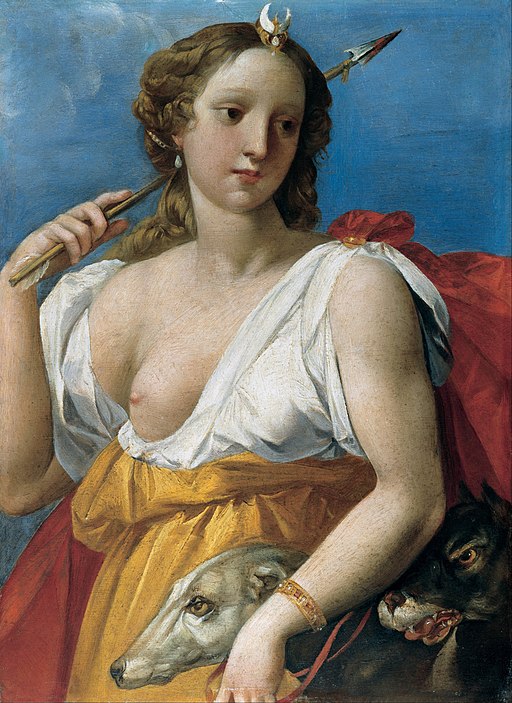 10 Famous Paintings of “Diana the Huntress”

Many famous painters have captured the mythological story of “Diana the Huntress” in Art:

“Diane the Huntress” by Giuseppe Cesari depicts the goddess from Roman and Hellenistic religion and mythology. The artist’s narrative skills are demonstrated in this small, sophisticated painting on a wooden panel from around 1600. Her symbolism in this painting includes holding an arrow, and she is accompanied by her hunting dogs. In her hair is an ornament in the shape of a crescent moon, an attribute of the goddess.

Diane was the patroness of the countryside, hunters, and the Moon. She is equated with the Greek goddesses Artemis and absorbed much of her Greek equivalent’s mythology, history, and attributes. Since the Renaissance, Diana’s myths have often been represented in the visual arts, and her most frequent sole depiction is as the huntress.

Giuseppe Cesari (1568 – 1640) was an Italian Mannerist painter who was honor with titles by his patron Pope Clement VIII. He was patronized in Rome by both Clement and Sixtus V. He was the chief of the studio in which Caravaggio trained upon the younger painter’s arrival in Rome. 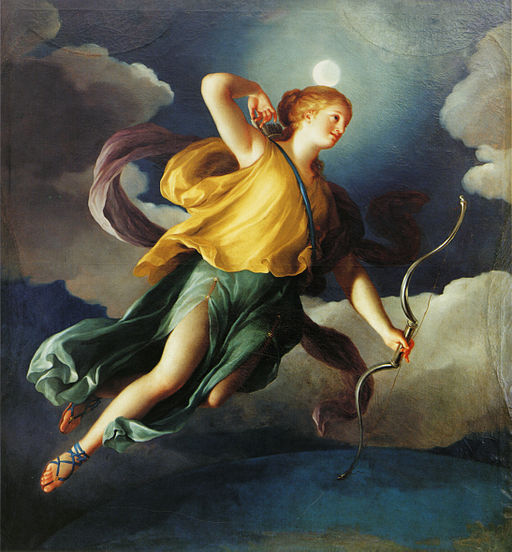 “Diana as Personification of the Night” by Anton Raphael Mengs depicts Diana goddess of the H+unt and the Moon in full flight above the earth. She is holding her symbol of bow and quiver as she stretches back to retrieve an arrow while on the hunt during the full moon. This painting is one of an ensemble of four paintings with personifications of the times of day intended as a decorative panel, set within ornamental moldings, for the boudoir of a Royal Princess.

Diana was often considered to be a goddess associated with fertility and childbirth and the protection of women during labor. This attribute probably arose as an extension of her association with the moon, whose cycles were believed to parallel the menstrual cycle, and which was used to track the months during pregnancy.

Anton Raphael Mengs (1728 – 1779) was a German painter, active in Dresden, Rome, and Madrid. He painted in the Rococo period of the mid-18th century but became one of the precursors to Neoclassical painting, which replaced Rococo as the dominant painting style. 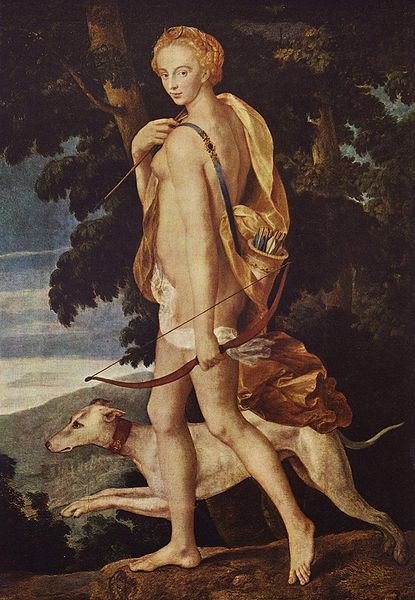 “Diana Huntress” by the School of Fontainebleau is a mythical representation of Diane de Poitiers, the mistress of King Henry II, in the guise of the goddess Diana. The figure carries a bow and a quiver of arrows and is accompanied by a dog. In her hair is an ornament in the shape of a crescent moon, an attribute of the goddess.

The style of the School of Fontainebleau would continue to influence artists through the first decades of the 17th century. Then other artistic currents such as Rubens, Caravaggio, the Dutch, and Flemish naturalist schools soon eclipse them.

“Diana Huntress” by School of Fontainebleau 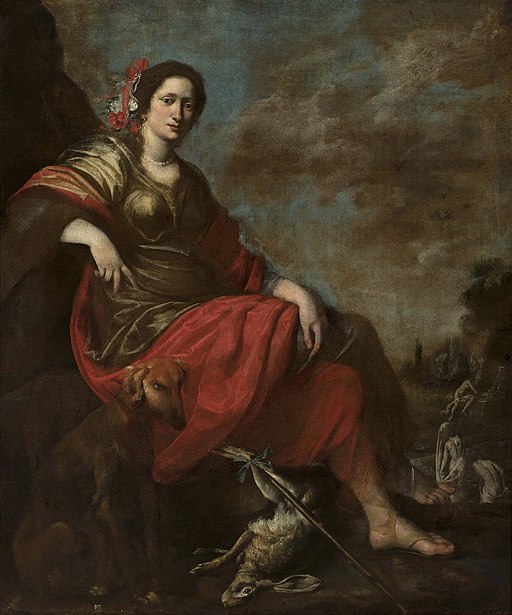 “Diana the Huntress” by Vincent Malo depicts Diana, who was originally considered to be a goddess of the wilderness and the hunt, a central sport in both Roman and Greek culture.

Vincent Malo (1585 – 1649) was a Flemish painter who, after training and working in Antwerp, was mainly active in Italy. Malo was a painter of genre scenes and religious and mythological subjects. 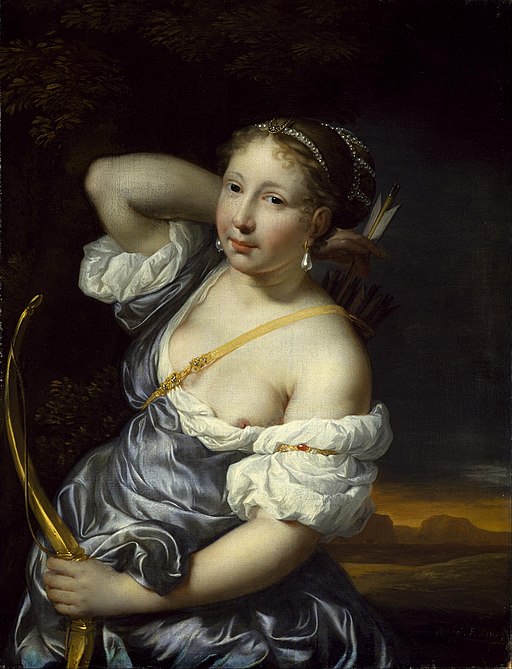 “Diana as Huntress” by Nicolaes de Helt Stockade depicts the goddess, who, according to the Greek legend of Artemis, her counterpart, was born on the island of Delos. Her parents were the gods Jupiter and Latona, and her twin brother was Apollo. She is considered a virgin goddess and protector of childbirth.

The Roman poet Nemesianus wrote a typical description of Diana:

“She carried a bow and a quiver full of golden arrows, wore a golden cloak, purple half-boots, and a belt with a jeweled buckle to hold her tunic together, and wore her hair gathered in a ribbon.”

“Diana Reposing” by Paul-Jacques-Aimé Baudry depicts the nude goddess, identified by the crescent moon in her hair and the bow and quiver at her side. Baudry composition shows Dianna reclined on a blue drapery in front of a stag in a woodland setting.

In their worship of the goddess, the Greeks filled their temples with sculptures of the goddess. Many of the statues were adapted for use in the worship of Diana by the Romans, beginning around the 2nd century BCE. Diana was usually depicted for educated Romans in her Greek guise.

Diana was often shown accompanied by a deer, this was symbolic of her role as the patroness of hunting. The deer also a reference to the myth of Acteon, who saw her bathing naked. Diana punished him by transformed Acteon into a stag and set his hunting dogs to kill him.

Paul-Jacques-Aimé Baudry (1828 – 1886) was a French painter. The works that crowned Baudry’s reputation were his mural decorations, which show imagination and an artistic gift for color.

“Diana the Huntress” by Giampietrino depicts the goddess of the hunt drawing an arrow. Diana is portrayed before a dense bank of trees with a delicate deer beside her. The artist was a faithful Milanese pupil of Leonardo da Vinci and copied Leonardo’s so-called Standing Leda to show the Diana in a contrapposto stance, with one hip back and the opposite foot forward.

Giampietrino seems to have carved a niche for himself with the depiction of female heroines of mythology and Roman history. Inspired by Leonardo’s two “Leda and the Swan” compositions, which are both lost, the female figures are generally shown nude and, often, full length and set in a landscape.

Giampietrino or Giovanni Pietro Rizzoli (1495–1549), was a north Italian painter of the Lombard school and from Leonardo’s circle. Giampietrino was among the most faithful Milanese pupils of Leonardo da Vinci.

Giampietrino contributed to the distribution of the style of Leonardo da Vinci. He copied numerous masterpieces by Leonardo, as well as leaving behind various original compositions of his own. Many of his works are preserved in multiple versions of the same subject. 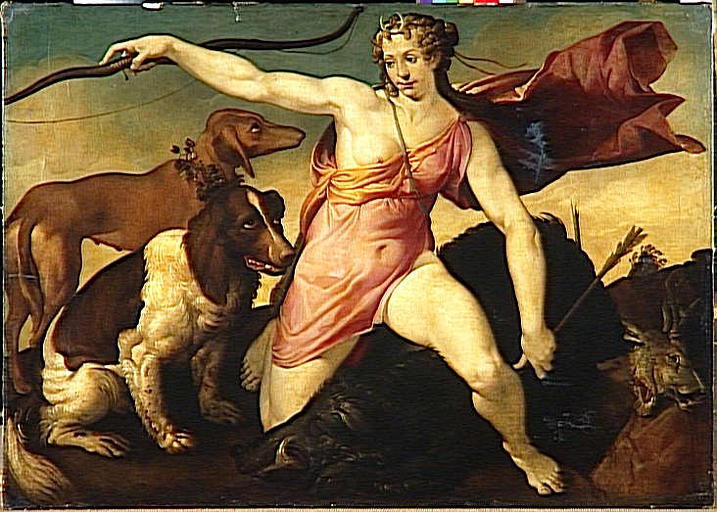 “Diana Huntress” by Bartolomeo Passerotti depicts the goddess of the hunt, with all her traditional symbols for easy identification. In her hair, she wears an ornament in the shape of a crescent moon. She holds a bow as she leads her hunting dogs in the hunt.

Diana has killed a big black boar and is shown at the moment when she is about to withdraw her arrow from the creature. Another symbol used to identify Diana is a deer with has been added on the bottom right of the painting.

Bartolomeo Passarotti or Passerotti (1529 – 1592) was an Italian painter of the mannerist period, who worked mainly in his native Bologna. He influenced many Bolognese who would later play a role in the rise of the Baroque. 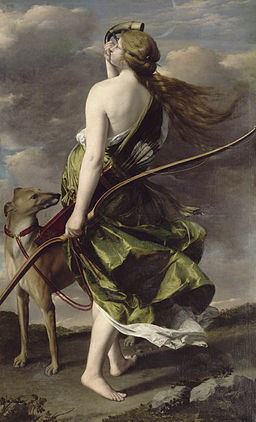 “Diana the Huntress” by Orazio Gentileschi depicts Diana, the goddess of the hunt and the moon from Roman mythology.

Diana is the only pagan goddess mentioned by name in the New Testament in Acts 19:27, in some translations by her Greek name “Artemis.” The part of Acts that references the pagan goddess has been called “The Riot in Ephesus”:

“There is danger not only that our business will fall into disrepute, but also that the temple of the great goddess Artemis (some translations use the name Diana) will be discredited and her majesty deposed—she who is worshiped by all the province of Asia and the whole world.”

When the men heard this, they were enraged and began shouting, “Great is Artemis of the Ephesians!” Soon the whole city was in disarray. They rushed together into the theatre, dragging with them Gaius and Aristarchus, Paul’s traveling companions from Macedonia.…”

As a result of her reference in the Bible, Diana later became associated with many folk beliefs involving goddess-like supernatural figures that Catholic clergy demonize. In the Middle Ages, legends of night-time processions of spirits led by a female figure are recorded in the church records of Italy, Germany, and France.

Orazio Lomi Gentileschi (1563–1639) was an Italian painter. After 1600, he came under the influence of the more naturalistic style of Caravaggio. He spent the last part of his life at the court of Charles I of England. He was the father of the painter Artemisia Gentileschi. 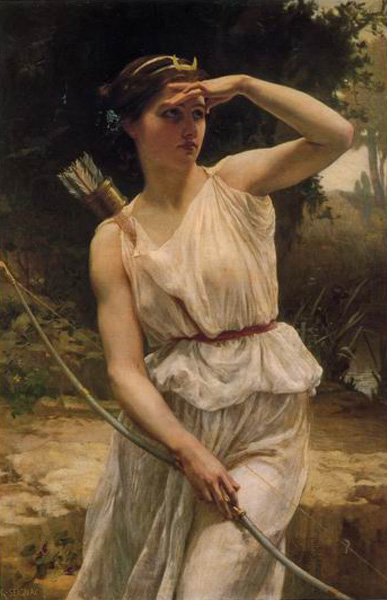 “Diane the Huntress” by Guillaume Seignac is a more modern depiction of the goddess who is dressed in the classical “peplos” of ancient Greece. A peplos is a body-length garment that became the typical attire for women in ancient Greece by 500 BC.

The peplos was a long, tubular cloth with the top edge folded down about halfway so that what was the top of the tube was now draped below the waist, and the bottom of the tube was at the ankle. The garment was then gathered about the waist and the folded top edge pinned over the shoulders. The folded-down top of the tube provided the appearance of the second piece of clothing.

The Classical garment is represented in Greek vase painting, in the metopes of temples and on classical sculptures.

Guillaum Seignac (1870–1924) was a French academic painter. Much of Seignac’s work displayed classical themes and style, his use of diaphanous drapery covering a woman’s body is reminiscent of classical style, in particular the sculptor Phidias.

Take a Virtual Tour on the Art of Everything

“Artemis of the wilderness, the lady of wild beasts. Zeus has made you a lion among women and given you leave to kill any at your pleasure. You hunt down the ravening beasts in the mountains and deer of the wilds.”
– Homer, Iliad