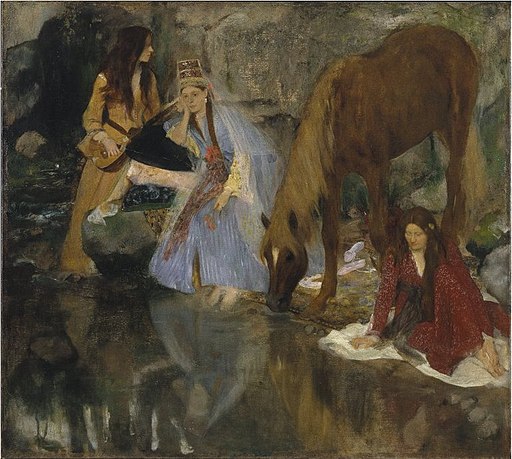 Portrait of Mlle Fiocre in the Ballet “La Source” by Degas

Portrait of Mlle Fiocre in the Ballet “La Source” by Edgar Degas depicts the famous principal dancer at the Paris Opéra in a scene from Saint-Léon’s ballet La Source.

Eugénie Fiocre (1845 – 1908) was a principal dancer at the Paris Opéra between 1864 – 1875 and was renowned for her beauty. Degas, who had a lifetime passion for Opera and its artists, shows her in a scene from the ballet La Source.

La source (The Spring) is a ballet that premiered in Paris in 1866. It was set in a fantastical Persia, which becomes the backdrop for the tempestuous love affair between the hunter Djemil, the beautiful Nouredda, and the sprite Naïla.

The opera starts with Nouredda on her journey to marry the Khan of Ghendjib. She and her entourage stop to rest by a stream in a rocky desert, where she admires a flower in an inaccessible spot.

Djémil, a young hunter, climbs up and picks the flower for her. Nouredda is thrilled and asks him to state whatever he wishes as his reward. He asks her to lift her veil so that he can see her face.

In her fury at the impertinence, she orders that he be tied up and left to his fate. However, the nymph Naïla rescues him, and after falling in love with him, promises to help him win the hand of Nouredda.

The Opera was a favorite French poetic dance tale of love and fantasy. Degas portrays the opening act showing Eugénie Fiocre in the role of Nouredda as she rests by the stream with her ladies-in-waiting together with her horse.

However, Degas shows Nouredda and the other figures in the painting in their Ballet dress on an Opera stage. Rather, he reimagined the scene as a history painting with historically relevant clothes and a natural setting that was more lifelike than any opera.

He was masterly in depicting movement, as seen in his many masterpieces of dancers, racecourse subjects, and female nudes.

Many had deteriorated. Except for the wax “Little Fourteen-Year-Old Dancer,” none of the other sculptures had been publicly exhibited during Degas’s lifetime.

Degas at the Opéra

Portrait of Mlle Fiocre in the Ballet “La Source”

Edgar Degas: A collection of paintings