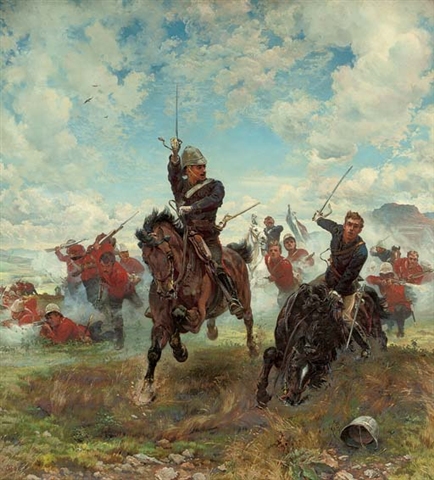 Floreat Etona! by Elizabeth Thompson shows two mounted British officers in blue jackets, with swords drawn, leading red-coated infantry in a charge, and the flat-topped mountain of Majuba in Natal can be seen in the background. The horse to the right is stumbling, and the officer to the left shouts encouragement. A Queen’s Color is just visible in the background.

The scene depicts an incident in 1881, during the First Boer War, in which Lieutenant Elwes of the Grenadier Guards, shown on the left, was killed at the Battle of Laing’s Nek in 1881. Elwes was one of 84 killed. The officer Monck who’s horse stumbled, survived the battle.

The British Army was attempting to force its way through a pass in the Drakensberg Mountains in South Africa when Elwes joined a hopeless frontal assault into the guns of the Boer defense, charging up a hill on horseback. He reported encouraging his fellow Eton old boy, with a shout immediately before he was shot and killed:

“Come along, Monck! Floreat Etona!
We must be in the front rank!”

The title of the painting is the Latin motto of Eton College, “May Eton Flourish.” This attack was the last time a British battalion carried its colors into action.

Famous for her portrayals of battle scenes, Elizabeth Butler was a remarkable artist and one of the few 19th-century women to acquire fame for her historical paintings. However, when this painting was shown at the Royal Academy Summer Exhibition in 1882, it was not a critical success. It commemorated an unfortunate incident, and also some critics thought the painting was too sentimental.

Eton’s motto is often thought to be “Floreat Etona,” which is translated as “May Eton Flourish” or “Let Eton Flourish,” but “Esto Perpetua” (May it last forever) was also used. Neither phrase was officially a motto, but they have stuck.

The Battle of Laing’s Nek was a significant battle fought during the First Boer War in 1881. The Boers, had about 2,000 men in the area, with at least 400 fortifying the heights around Laing’s Nek. They had little difficulty in repulsing the British Natal Field Force, commanded by General Colley, numbering around 1,216 officers and men.

The British lost 84 killed, 113 wounded, and two captured during what was perceived as a fiasco. The Boers reported their losses at 14 dead and 27 wounded. One month later, General Colley was killed at the Battle of Majuba Hill, which ended the war, after which Transvaal was recognized as an independent state.

Elizabeth Southerden Thompson (1846 – 1933) was a British painter, who specialized in painting scenes from British military campaigns and battles. She wrote about her military paintings in an autobiography published in 1922: “I never painted for the glory of war, but to portray its pathos and heroism.” She married Lieutenant-General Sir William Butler, becoming Lady Butler.

In 1866 she entered the Royal Female School of Art in London, and after moving to Florence in 1869, she continued her studies at the Accademia di Belle Arti. After became a Roman Catholic, she initially concentrated on religious subjects. Still, upon going to Paris in 1870, she was exposed to battle scenes by famous French artists and switched her focus to war paintings. In the 1874 Royal Academy Summer Exhibition, her painting “The Roll Call” became so popular that a policeman had to be stationed next to the picture to regulate the crowds that came to see it. Butler wrote that after the Exhibition, she awoke to find herself famous. In 1879, Butler came within two votes of becoming the first woman to be elected as an Associate Member of the Royal Academy.

After her marriage in 1877 to Sir William Francis Butler (1838–1910), an officer of the British Army, from Ireland, Butler traveled the far reaches of the Empire with her husband. On her husband’s retirement from the army, they moved to County Tipperary, Ireland. During the Irish Civil War, a collection of watercolors she had created from their time in Palestine was moved for safekeeping. Later again, they were moved to London. Ironically most of them were destroyed during the WWII German Blitz of London.

Elizabeth Thompson raised six children and continued to paint. She was widowed in 1910 and died in 1933, shortly before her 87th birthday.