Franz Marc created many paintings featuring animals, and among his most popular and famous animal paintings are his pictures of horses.

Blue Horse I by Franz Marc

“Blue Horse I” by Franz Marc from 1911, the same year that Marc was a joint founder of The Blue Riders (Der Blaue Reiter).

His perspective evolved, but at some level, he was attempting to imagine the view through the animal’s eyes.

Marc became preoccupied with animals, seeing them as the embodiment of a better, purer world, the bringers of spiritual renewal to Western culture.

This group of artists united in rejection of earlier conventions. The group was founded by several Russian emigrants, including Wassily Kandinsky and native German artists, such as Franz Marc.

Der Blaue Reiter was an art movement lasting from 1911 to 1914 and was fundamental to Expressionism.

In 1911, the Der Blaue Reiter group was preoccupied with questions of color, and it was during this debate that Marc started working on Grazing Horses IV.

He wanted to give form to his inner experience and to free himself from formal constraints; he wanted to detach color from its descriptive function and assigned each primary color a symbolic value.

As this painting’s numeric title suggests, Marc repeatedly returned to the horse as a subject.

This painting first belonged to a German Museum, which was at the vanguard of contemporary art collecting at the time.

This picture was removed from the collection in 1937 as part of the Nazi campaign to rid German museums of “degenerate art.” 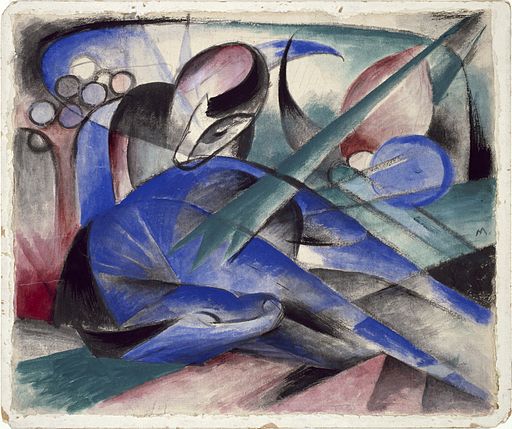 The sleeping horse is surrounded by nature depicted geometrically with reds and greens. The use of black and red contrasts with the green, which represents a place of rest, such as grass.

This painting provides us with a sense of the artist’s struggle for peace and tranquillity in what were becoming turbulent times, leading up to World War I.

The motifs in “Dreaming Horse” are characteristic of his love for animals as are the Cubistic and Fauvist styles which influenced Marc’s Art.

“Stables” by Franz Marc depicts the images of horses and stables as almost indistinguishable. The artist arranged a group of red, blue, and white horses within a framework of parallel and crossing diagonals.

The horses are massed on the picture plane and transformed into flat colored shapes.

The patterns of the horses’ tails and the shifting planes of colors suggest the influence of the Futurists whom Marc had met during a trip to Paris in 1912.

Like Vasily Kandinsky, Franz Marc was searching for ways to reflect inner spiritual and emotional states through art.

Marc’s approach was focused on nature and was founded on the belief that animals possessed a certain godliness that humanity had long since lost.

During the period of this painting, Marc had become increasingly interested in abstract pictorial modes to express universal truths.

Rather than portraying the natural world from the point of view of the individual animal, as he had previously, Marc depicted his subjects as part of a larger unified cosmos.

He treated his horse depictions in terms of the overall structure of the composition.

“Horses and Eagle” by Franz Marc demonstrate Marc’s attempt to immerse himself in the animal’s soul. He imagined how nature reflects in the eyes of animals.

The composition of many of his later works was dominated by geometric structure. He also used color with echos of stained glass. With variations of color saturation, he created many compelling paintings featuring horses.

Marc had a nature-oriented quest for spiritual redemption as his inspiration for his art. He felt that animals possessed a certain godliness that men had lost.

Also, as a symbolist painter, Marc used mythological and dream imagery. The symbols he used had personal, private, and ambiguous references.

For Marc, blue was equated with spirituality and maleness, yellow with femininity and sensuality, and red with the earth. The colors in the painting are symbolically representing the sense of the objects in the artwork.

Marc showed several of his works in the first Der Blaue Reiter exhibition in Munich between 1911 and1912.

He created a series of nine such tarpaulin covers in forms varying “from Manet to Kandinsky,” suspecting that the latter could be the most effective against aircraft flying above 2000 meters.

Franz Marc: A collection of 338 works

The Paintings Of Franz Marc